Quite strange task, but proving should be interesting, no idea how to do it?

It's a quite strange task.

We have a 5 long worm on [0,5] interval. After some "twisting", now it is on the interval [0,1] only. Prove that the worm has a point, which didn't change position during this process.

I'm not sure if you can understand, but I can't really prove this funny, but interesting task! (Maybe it has to do something with the continuum amount of numbers on this intervates)? :)

I shall try to tackle this interesting question using a graph, though I suppose this proof is not quite formal.

First, I shall only concern the "tail" of the worm that is originally located at $[0, 1]$, because this is the part where a point exists without changing its position (if any).

Next, I create a graph as follows: 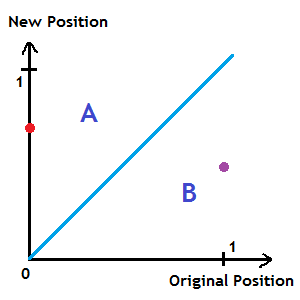 (Remark: The following is a streamlined version of LaBird's answer. Give the credit to LaBird above.)

First, I shall only deal with the part of the worm that originally takes up the interval $[0,1]$, because only for this part a fixed point can occur.

21
Why isn't $\mathbb{R}^2$ a countable union of ranges of curves?
3
Proving that the nested intervals theorem implies that every upper bounded non-empty set has a supremum
3
Prove that ALL solutions of the differential equation y'=y are of the form y=c*e^x
2
Open in X (X is a metric space) how can you show or tell if it is open or not in general terms? What does it really mean?
4
Question about Sets with a Certain Property
1
Requirement in order to discuss derivative and terminology for $x\in E\cap E'$.
0
How would you prove that $\sum_{k=1}^{n}\frac{k}{(k+1)!}= \frac{(n+1)!-1}{(n+1)!}$
0
How should I go about "proving" inequalities?
3
Antenna adjustment: A real-life problem -- solving for a factor when only a change is known