During school our teacher always explains the proof for all theorems even simple ones such as why does the angles in a triangle of add up to $180$ and they all involve alternate, corresponding or co-interior angles. However it has never occurred to me that he never shown the proof of how are alternate angles are equal.

Could any explain the proof for alternate, corresponding and co-interior angles?

Not everything has a proof. As sawarnik link says that there are axioms and postulates regarding this fact. We havent been able to find 2 parallel lines with transversal who's alternate and co interior angles arent equal :)! The day someone does euclid and others will be proved wrong. But anyways u can always geometrically prove this by making a parallel line transversal setup. Cut the co interior angles briefly and putg them next to each other you will see that they will be exactly like a protractor or semi circle making 180° similarly corresponding interior and alternative interior angles will overlap proving that they are equal...If they aren't you will become famous!!

I remember that once (Maybe $2000$ years ago), I asked this question on Physics SE, and the title of question was:

Can Newton's laws of motion be proved (mathematically or analytically) or are they just axioms?

There are many things I learnt from answers there abut the most thing was:

Asking whether one can prove something is a meaningless question unless one specifies the axioms one is allowed to use in the proof.

Whenever we see something in mathematical context we have two choices:

$1$. Assume it to be an axiom/postulate.

The first thing is easy to do because you have to do nothing, but it has also got some disadvantages. I mean you cannot be assured after choosing something as axiom because it can be wrong too, that is why we select only those things as axioms/postulates which are obvious.

Now, when we try to prove something, we do it by taking help of previously proved things or established axioms/postulates.

Now, let's come to your question, you are asking for a proof of equality alternate angles and whatever..

Now, it is quite right to think that way because yes you can prove that things provided that what axioms/postulates you want to assume true before constructing a proof.

For example: You can prove that alternate angles are equal by assuming that angles between two parallel lines are supplementary and a straight lines is just $180$ degrees (In terms of angles ).

I shall let you conclude.

Actually everything can't have a proof. The things those proof you are wanted can be proved but at least one of them must be taken as an axiom. After that observe the Image. If any one is known or a axiom.

$(1)$ Suppose Co-interior property is known then the sum of angles on the same side is $180^\circ$ if one angle is $\theta$ then the co-interior angle is $180^\circ-\theta$ then the corresponding angles must equal by using linear pair property. And when corresponding angles are equal then by using vertically opposite angle property the alternate angles must be equal. 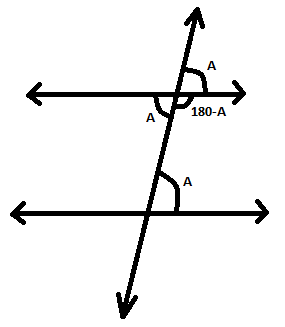 SORRY FOR ANY GRAMMATICAL MISTAKE.

The Corresponding Angles Postulate is the base for proving the other cases.

As a postulate it does not have a proof and is part of the Parallel Lines axiom.

To summarize: based on the corresponding angles postulate you may prove the theorems with regard to alternate and co-interior angles. From there you derive the sum of the triangle angels to be 180.

Suggest you take advantage of the wealth of knowledge on WWW

-1
Is there really no proof to corresponding angles being equal?

4
Proof of "triangles are similar iff corresponding angles are equal"
3
Unsure about alternative angles proof using contradiction
0
$n$ points on a circle connect by lines, the sum of the internal angles is $(n - 1) 180$°
0
Regular polygon Interior angles
3
How to determine (and explain) the sum of angles without measuring?
3
A way to directly see the Inscribed angle theorem? (i.e. central angle is twice the inscribed angle)
0
Why is a exterior angle of a triangle equal to the sum of the opposite interior angles?
1
Why is the sum of all external angles in a convex polygon $360^\circ$ and not $720^\circ$?