Compute coordinates of a point in 3D-Euclidean Space

My question concerns the computation of a point’s coordinates in three-dimensional Euclidean Space.

I have a point P in three-dimensional Euclidean Space whose coordinates are unknown. My goal is to compute its coordinates given the provided information: Given are four points named A, B, C, and D - whose coordinates are known – and their respective Euclidean Distances to point P named AP, BP, CP, and DP, respectively; no two given points are equal and neither does P equal any of those points. Furthermore, all four points are distributed over all three plains; for every coordinate (X, Y, and Z) it is possible to find two points who differ in the respective coordinate. Finally, it must not be possible to form a flat four-sided figure with the four points as corners (see also the comments down below).

Ultimately, I am seeking an algorithm for determining the coordinates of P. I appreciate any and all answers, even if they only suggest an idea for resolving my problem. If the answer proposes an algorithm for constructing a special case such as described above, this question would also be answered. It is not difficult to determine the coordinate of A’, B’, C’, and D’ which fulfil the imposed requirements of the special case, the problem I had was figuring out their distances to P.

This seems to be a common problem in navigation, as it corresponds to distance measurements of an object from different stations: Trilateration

The above article argues that three spheres will allow to pinpoint the location down to two candidates, thus a fourth sphere might settle the issue.

There is an interesting calculation, which uses a coordinate transform, to simplify the equations:

I would study the problem for three spheres, which should give two candidates and then use the closest to the fourth sphere (if there is sucha point).

To respond to the OP's question, squaring is preferable to absolute value for smoothness of the function, which is important for the accuracy of minimizing algorithms.

whose solution is clearly $(0,0,0)$, and then minimizing, results in 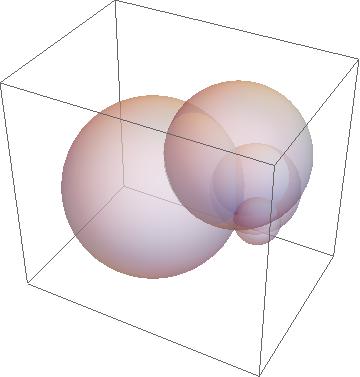 Not the answer you're looking for? Browse other questions tagged algorithms euclidean-geometry or ask your own question.

3
Determine a point lie in bisect area between 2 circles on sphere
2
How can I efficiently check a point lie in 4 circles on sphere?
1
Arc Circle Intersection in Euclidean 3D
2
Coordinates in a circle from 3 distances
4
Algorithm for Random irregular polygon in between two shapes
2
Euclidean geometry problem (question 4 from Putnam and Beyond)
1
Position in Circle given coordinates of points on the edge and distance to these points
2
Coordinates in a new coordinate space defined by three points.
0
Euclidean construction of sine curve