Log or Antilog tables, which ones are more useful?

I'm trying to make a Log or Antilog table small enough to fit in the back of a wallet calendar (or a business card). My intend is to build a mathematically useful gift that can be used by anybody eager to spend 5 minutes learning how it works.

My question is: What 50 numbers should I select to maximize the usefulness of the table?

My first idea is to select the decimal logarithms of the first 50 even numbers:

I can put them in the table anyway or just use 45 numbers (which are both sub-optimal options from my point of view) or simply re-scale the whole table:

But if I'm not going to be able to obtain the logarithm of most natural numbers maybe it is a better idea to just make an Antilog table:

I know that both kind of tables (logarithmic or antilogarithmic) can be used to compute logarithms and antilogarithms approximately (using a direct or a reverse look-up depending on the case) but I'm not sure if there is a good reason to prefer the former ones instead of the latter ones.

This is an example of what I mean by Decimal Logarithms Table in a Business Card: 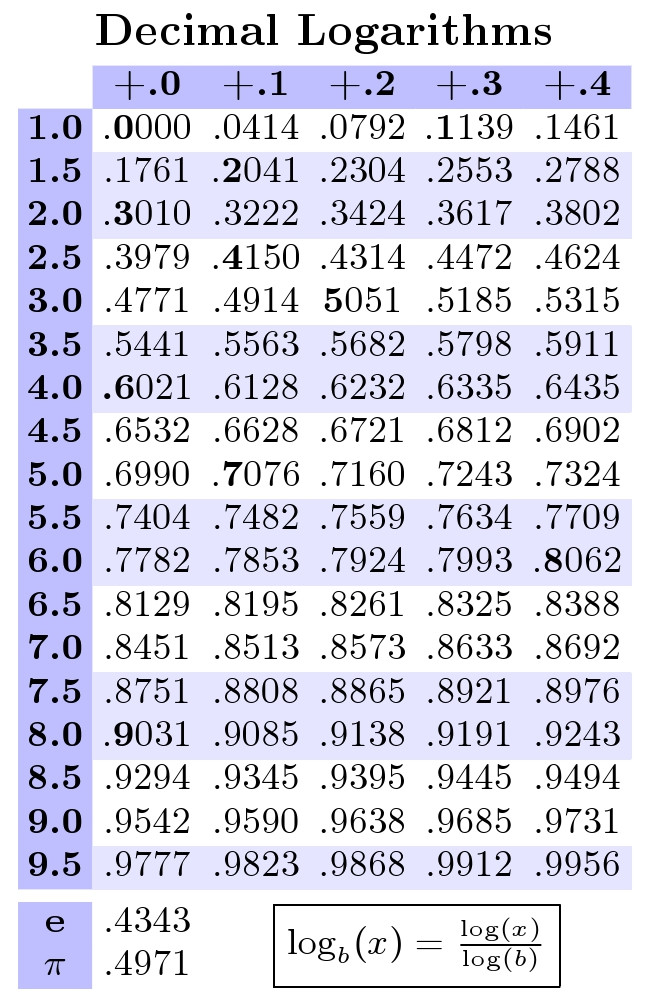 I really like this question. It probes the meaning of what is "useful" to a mathematician.

First off, I would definitely choose log rather than antilog tables. I presume we are talking about natural logarithms, by the way.

If instead we are using logarithms to base 10...

15
Are Base Ten Logarithms Relics?
20
Approximating Logs and Antilogs by hand
1
Logarithm, Just need help understanding what this question is asking. Not looking for an answer.
1
Imprecise logarithms that reference sets of numbers.
1
Sieve of Eratosthenes Time Complexity Clarification
1
How to solve exponents using log?
0
The base of a logarithm
0
4 figure tables: what is the short 7 fig table on the back page for?
0
A equation based on logarithms.