How to understand dot product is the angle's cosine?

How can one see that a dot product gives the angle's cosine between two vectors. (assuming they are normalized)

Thinking about how to prove this in the most intuitive way resulted in proving a trigonometric identity: $\cos(a+b)=\cos(a)\cos(b)-\sin(a)\sin(b)$.

But even after proving this successfully, the connection between and cosine and dot product does not immediately stick out and instead I rely on remembering that this is valid while taking comfort in the fact that I've seen the proof in the past.

Any two vectors in an $n$-dimensional Euclidean space together span a Euclidean space of dimension at most $2$, so the connection between the dot product and angles in general reduces to the case of $2$ dimensions.

Here's one way to remember it easily: assume one of the two unit vectors is $(1,0)$ (by an appropriate choice of coordinates we may assume we are working in $2$ dimensions, and then that one of the vectors is the standard basis vector). Then the dot product is just the $x$-coordinate of the other, which is by definition the cosine of the angle between them.

This is what helped me understand it most: 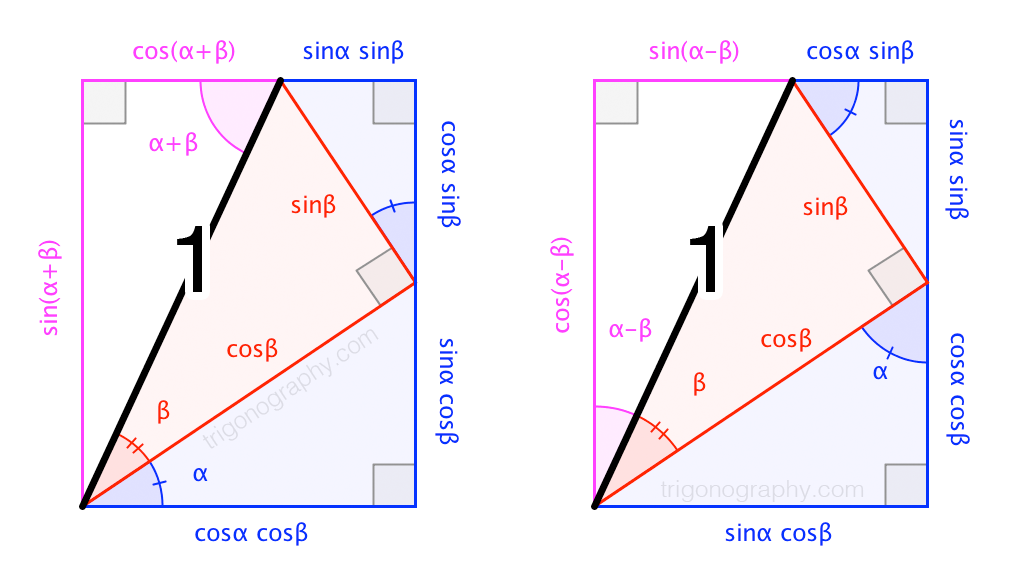 primarily the picture on the right side.

Let the pink left side of the rectangle be a vector v you're projecting onto.

Let the black line labeled with a '1' be a vector u that you're projecting onto v.

The bit of pink on the top left is the orthogonal "line of projection" from the tip of u to the span of v.

The angle $\alpha - \beta$ in the pink triangle is the angle between v and u.

Imagine you're tilting the diagram a bit clockwise so that the long side ($cos\beta$) of the orange triangle is horizontal.

The blue side on the right is equal in length to the pink side on the left since this is a rectangle. On the blue side we can see the length is made up of $cos\beta \cdot cos\alpha + sin\beta \cdot sin\alpha$, which, if u and v are unit length, is the dot product.

Here's another diagram of the same scenario with a "normal" axis, and then also a rotated grid corresponding to v, the orange vector being projected onto 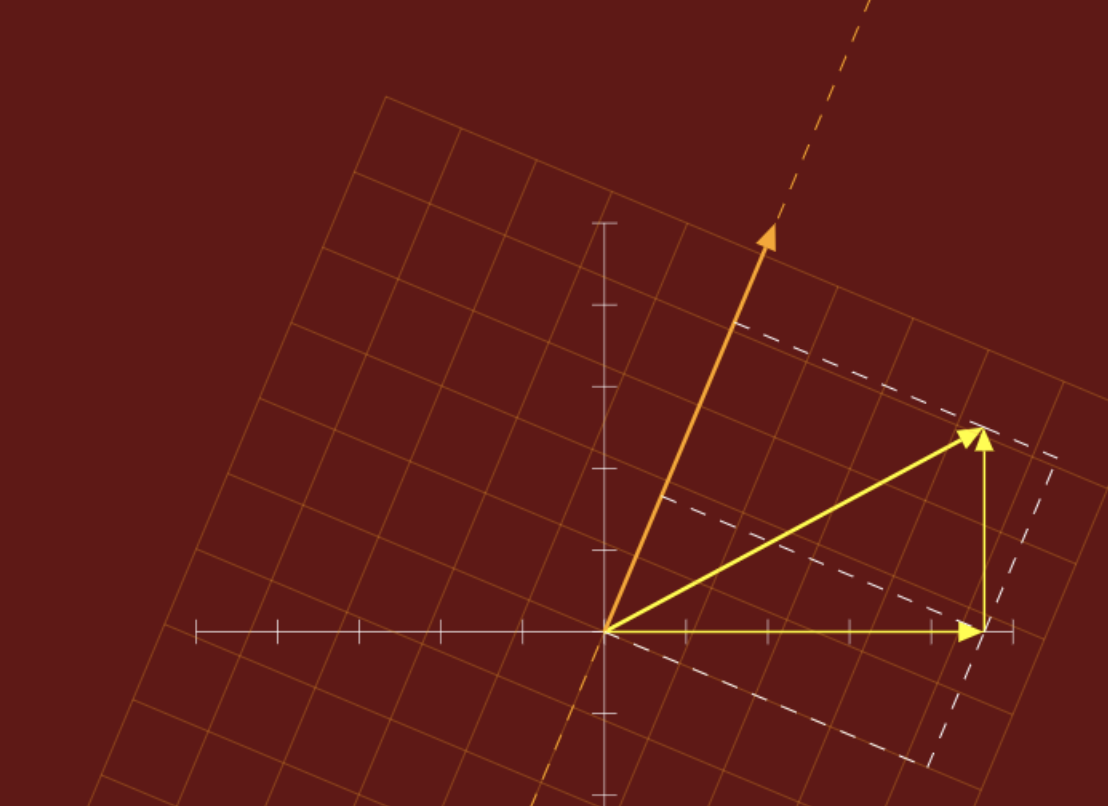 $cos\beta$ is the length of the x component of u, a unit vector $\beta$ counter-clockwise from the x axis.

$cos\alpha$ is the same for v. It's also the factor by which a vector pointing along the x axis (such as the x part of u) is scaled when it's projected onto v. This is because: say you have a right triangle with hypotenuse of length 1 lying on the x axis, with another side aligned with v. That side will have angle $\alpha$ with the hypotenuse (because v is $\alpha$ counter-clockwise from the x axis) and so its length will be $cos\alpha$.

So the x component of u is of length $cos\beta$, then when being "scaled" by projecting onto $v$, it becomes $cos\beta \cdot cos\alpha$.

The case with y components and $sin$ is analogous.

Not the answer you're looking for? Browse other questions tagged geometry vector-spaces inner-products or ask your own question.

22
Proof of equivalence of algebraic and geometric dot product?
3
How can you use the Law of Cosines to show that "u ∙ v = ║u║║v║cosθ "
9
Why are the two dot product definitions equal?
7
Is this a circular proof of Pythagorean Theorem? If not, are there better ones?
6
How to prove invariance of dot-product to rotation of coordinate system
3
Motivation behind Definition of Dot Product
4
Why do you calculate the dot product that way?
3
Demonstrate that the two formulae for a scalar product are equivalent.
1
Proving the dot product cosine identity for dimensions $> 2$
0
Why is the dot product of perpendicular vectors zero?
See more linked questions