I've recently watched a fun video about some snakes made up of modules and how we can think about the way they are arranged as follows. 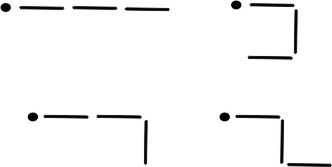 Given this rules, can we combinatorially find a way of computing the possible configurations of an $n-\text{snake}$? I guess we can just leave the orientation aside and then multiply by $4$. As an example, I leave the configurations for $n=3$ and starting $E:$, which are: 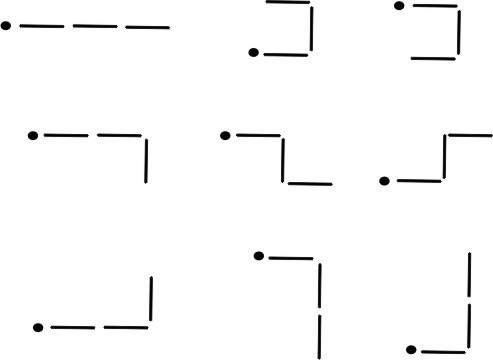 It seems easier to compute $\mathcal{S}(4)$ if we use the coding. This gives

I'll write some values, without multiplying by $4$:

We can say that

The reminder is actually the important thing here. We have that for the first 5 cases

The reminder of $n=5$ is built up from the case $n=4$ since we just consider the next step. In the first one we set apart

So now we consider the following "products":

Thus we have that

The next remainder will be

Why? We take $\mathcal{R}(5)$ as a base, and worry about the palindromes, which are

Although this might feel very simple and playful, this is an unsolved problem that has been considered. In particular, this is equivalent to the following problem:

Madras and Slade have a book, The Self-Avoiding Walk dedicated largely to this problem.

16
How many ways to have a perfect game of snake?