n-by-n degree grid on a sphere?

I've been trying to generate an evenly spaced grid centred at a given point on a sphere, such that the angular separation between any neighbouring pair of points is the same (e.g., 1 degree). The grid should be oriented with the central column of points along the same meridian as the given point. I have little experience with spherical trigonometry (aside from knowing about the Haversine formula and the spherical law of cosines) but after some reading I'm fairly certain that each cell will require four unique great circle arcs. The previous approach I followed using vectors only found great circles perpendicular to the central column (like the coloured grids shown in the first plot) and so the points were not evenly spaced, especially at the edges. Each point in the second plot (showing the result of my latest attempt) is plotted with a 1 degree-radius circle surrounding it, which ideally should coincide with the surrounding four points. The updated method described below finally generates a regular grid. However, for a 20-by-20 degree grid the angular separation of the corner point to the central column is ~4.5 arcseconds smaller than the ideal 10 degree separation. Does anyone know of a method that can determine the required grid points to greater precision?

Current method: The procedure I've followed so far to generate the n-by-n degree grid centred at a given point (e.g. longitude=0, latitude=0; let's call this point A) involves three stages:

Note: a 10-by-10 degree grid would consist of 11-by-11 points each separated from the nearest four points in the adjacent rows and columns by 1 degree. All calculations assume a sphere of radius 1.

First compute vectors AB and AC then a unit vector normal to the triangle BAC can be found from their cross-product, i.e. t=ABxAC. To find D, the approach I've used is to rotate the plane on which A/B/C/D lie to align it with the xy-plane. The rotation matrix requires a rotation axis and rotation angle that I found here: https://gamedev.stackexchange.com/a/48102

The dot product of the rotation matrix using the same rotation axis but rotation angle of opposite sign to that given above with vector D' gives the coordinates of vector D, which can be converted to the latitude and longitude for point D. This is repeated for every remaining point in the four quadrants.

I've spent a few days looking for a better method but without any luck. 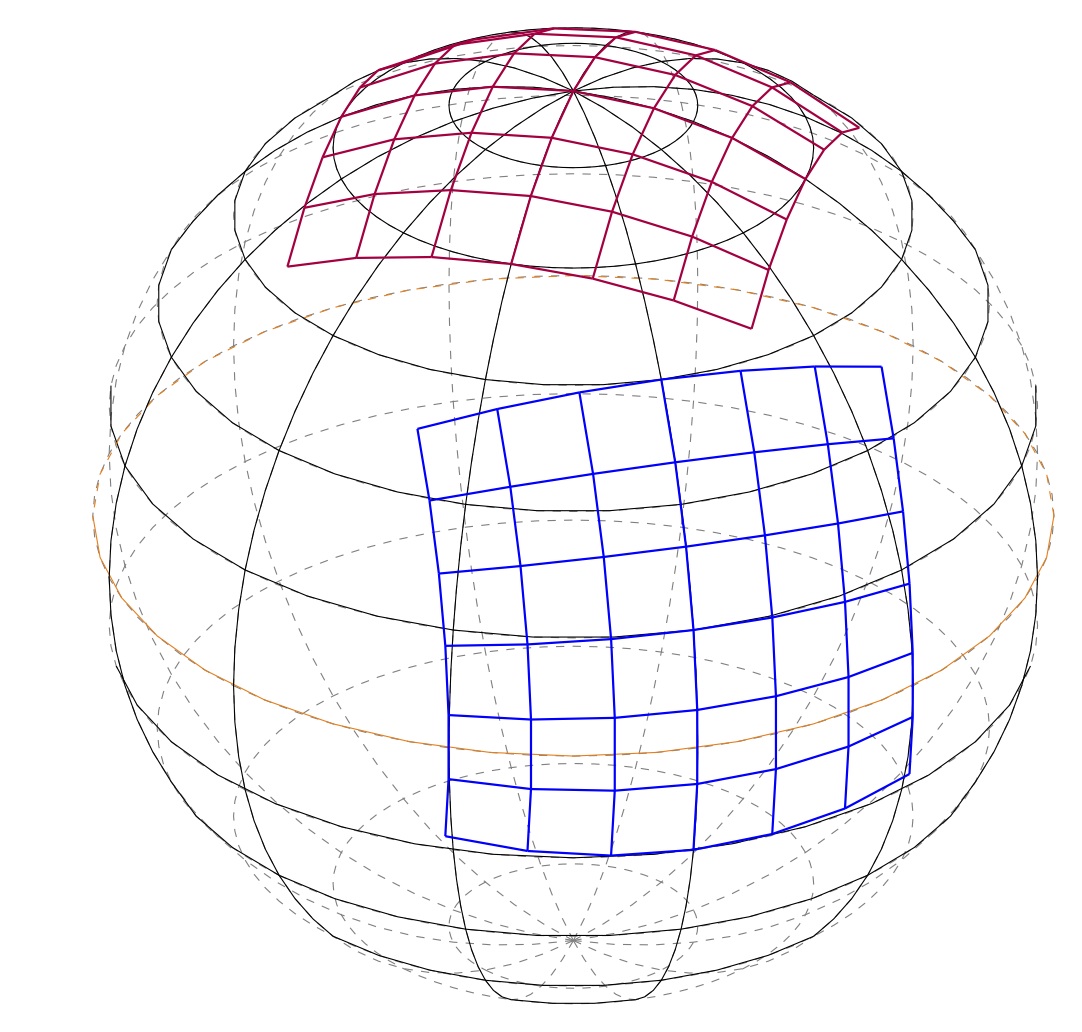 Fig 2. Grid points - note circles shown are 1 degree in radius (i.e. the perimeter of a 1 degree spherical cap centred at the given grid point). I had used a gnomonic projection to present the grid in figure 2 (using the python plotting package APLpy) but replaced it with an orthographic projection since the former shows great circles as straight lines but in this case the rows of points are joined by different great circle arcs, except the (n/2+1)th row. 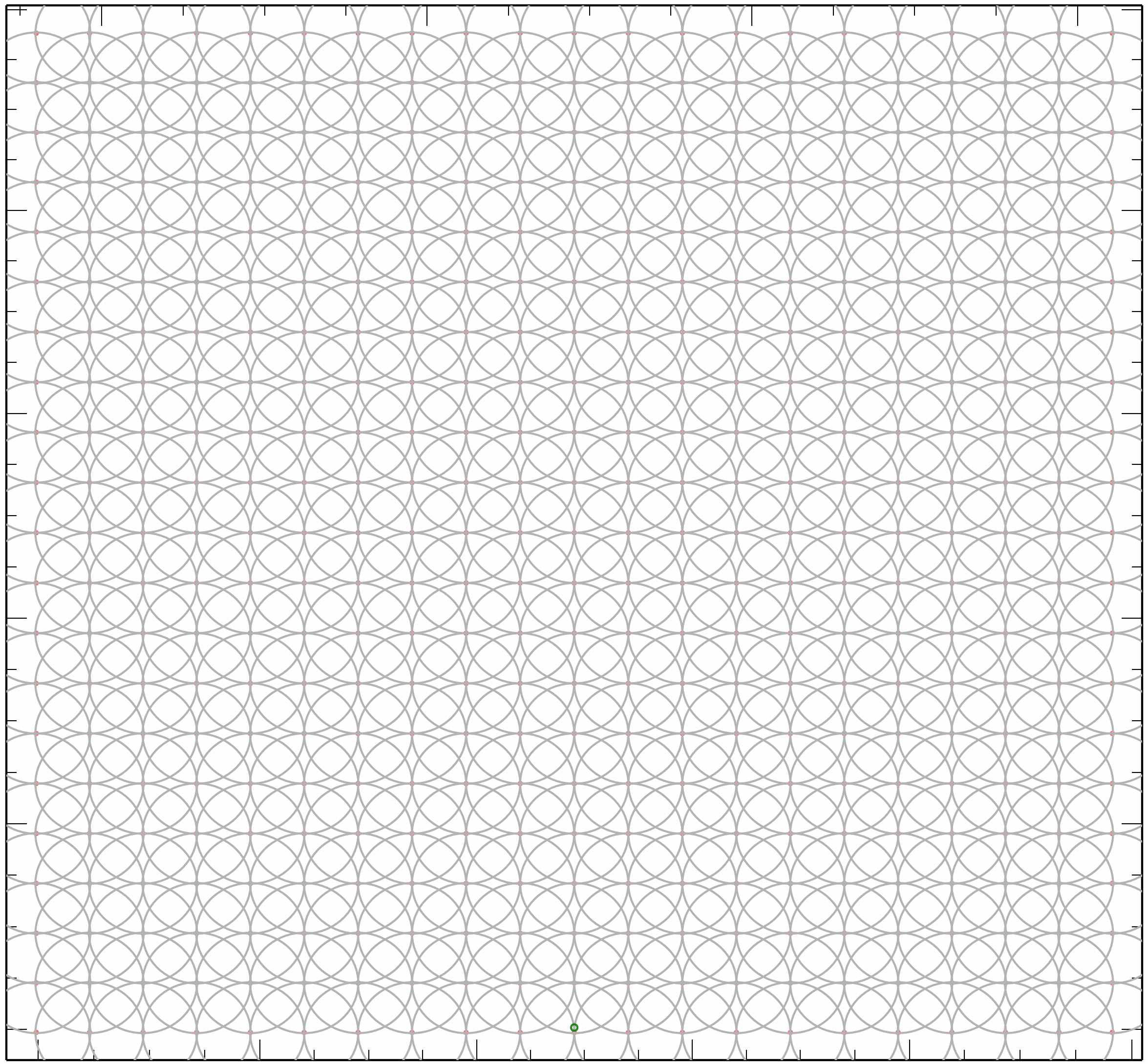 You can't do what you are hoping because you can't cover a sphere with squares. In fact, you can't even put one square on the sphere. If you look closely, the angles of your squares add up to more than $360^\circ$, by an amount that is determined by the solid angle taken up by the square.

A few choices that maintain some of what you want. 1) The black grid in your first figure comes from the classic lines of latitude and longitude. You get quadrilaterals except near the poles. You can choose what latitude to make the cells almost square, but they will be much larger near the equator than near the poles. 2) Use the latitude/longitude lines as in 1, but have fewer cells as you get near the poles. You can keep the cells close to square, but won't have a nice grid. 3) Use the square grid as you are, but recognize that you can't have one grid that covers the sphere. Maybe a grid that covers about half the sphere centered on a point of current interest meets your needs.

1
How would I calculate the area of a rectangle on a sphere using vertical and horizontal angles?

3
Lat/Long grid points covered by projecting rectangle onto sphere
14
Great arc distance between two points on a unit sphere
1
How do I rotate a rectangle of latitude and longitude?
2
Find Latitude of point given Longitude and Great Circle orientation
1
Reflections On Sphere Surface / Getting Great Circle from two 3D points
5
Finding the northernmost latitude in a great circle that passes through two points on the sphere
0
Converting a geodesic into a set of Euler angles
5
Find the distance between Helsinki and Seattle