I'm a programmer working on a calculation with a curve trend. I'm using OpenOffice Calc (like MS Excel) and it's given me a formula for a graph that I don't understand. I can't find this form anywhere.

Here is the chart: 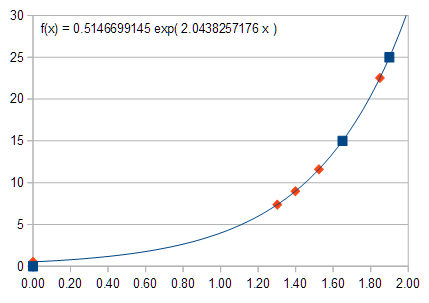 I don't recognize that formula. the exp() part is part of the program syntax I think. The documentation for it says:

Can anyone tell me what this formula is called and how it works? It's been a long time since my math classes.

exp is the exponential function, also sometimes known as the natural antilogarithm. Usually mathematicians write it as $e^x$ instead of $\exp(x)$, but it's the same thing.

It has various possible definitions -- one of them is that $x\mapsto e^x$ is the function that is its own derivative and maps $0$ to $1$.

The particular numbers in your function are probably ones that the program has chosen for you such that the function approximates the data points you've asked it to fit to. Using power laws we can also write it as

In general this kind of function is known as an exponential growth function. The constant $0.514...$ is the value of $f(0)$; you can call it the $y$-intercept or "initial value" or something like that.

exp is the exponential function.

Not the answer you're looking for? Browse other questions tagged exponential-function or ask your own question.