Free objects; the way they are defined in terms of commutative diagrams 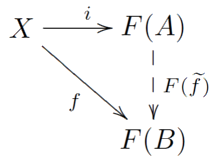 I just can't seem to understand the categorical definition of free objects in terms of commutative diagrams, so I would appreciate any help in grasping the intuition behind the way free objects are defined in categorical setting.

There's a more sophisticated way to think about free objects that involves fewer diagrams. Recall that the forgetful functor has a left adjoint, which produces free objects. From this perspective, forming a free object (generated by some set $S$) is equivalent to finding the canonical object containing $S$.

For example, consider the forgetful functor from groups to sets. Then the free group generated by $\{a,b\}$ is the canonical group which contains the symbols $a,b$. Hence it will have no relations. On the other hand, when you take the forgetful functor from abelian groups to sets, it will be the simplest abelian group containing $a,b$, which in this case would be $\mathbb{Z}[a,b]$.