This is a follow up to Is every shape possible with a snake? .

Imagine a 2d snake formed by drawing a horizontal line of length $n$. At integer points along its body, this snake can rotate its body by $90$ degrees either clockwise or counter clockwise. If we define the front of the snake to be on the far left to start with, the rotation will move the back part of the snake and the front part will stay put. By doing repeated rotations it can make a lot of different snake body shapes.

Now let us define a valid shape. A shape is valid if it can be formed from a straight line snake by applying at most one $90$ degree bend at each one of the integer points along its body and no two parts of the resulting shape intersect or touch each other.

We now apply some further rules to say a shape is reachable. A shape is reachable if it is valid and it is possible to reach the orientation without any parts of the snake's body intersecting or touching in between. This includes during the rotations needed to bend a part at right angles.

Here are some examples thanks to Martin Büttner.

We start with the horizontal snake.

Now we rotate from position 4. 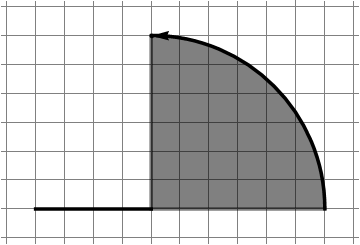 We end up after the rotation in this orientation. 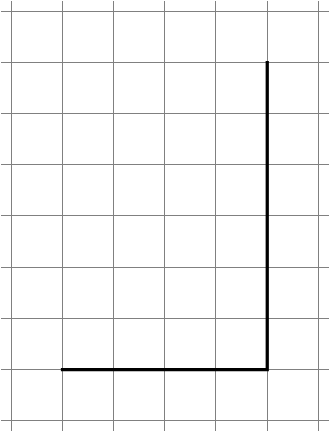 Now let us consider this orientation of a different snake. 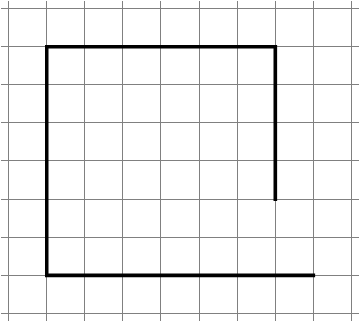 We can now see an illegal move where there would be an overlap caused during the rotation. 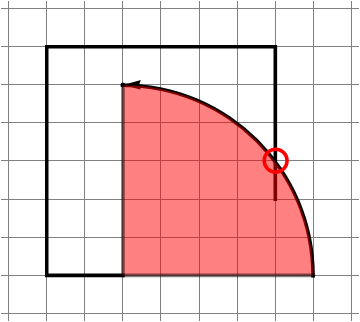 When a rotation happens it will move one half of the snake with it. We do have to worry about whether any of this part which is rotated might overlap a part of the snake during the rotation. For simplicity we can assume the snake has width zero. You can only rotate at a particular point in snake up to 90 degrees clockwise of counter clockwise. For, you can never full fold the snake in two as that would have involved two rotations at the same point in the same direction.

Shapes that can't be reached

A shape that can't be reached is

(Thank you to Harald Hanche-Olsen for this example)

What is the shortest possible unreachable valid shape?

David K gave a shape of length 31 which is unreachable. Is this the shortest possible?

Taking into account that the snake can fold or unfold itself at any one of its integer-coordinate points at any time (provided that it does not touch itself during or after this operation), the snake of length $31$ shown below (based on Harald Hanche-Olsen's example) is unreachable:

It is clearly impossible for the snake to fold or unfold at any other point.

When I first answered this I considered only "straightening" moves when thinking about transforming the snake back to its initial shape. This led me to propose the following shape for a snake of length $24$:

As observed in the comments, there is a legal move at one of the points along the top edge of this shape (in fact there are three such points at which there is a legal move), after which the snake can obviously be unfolded to its initial shape. Hence this shorter snake's shape would be unreachable only under a much more restricted set of rules in which a right angle bend in the snake, once made, could not be unmade. As that restriction was not intended in the original problem statement, this shape is not a solution to the problem. 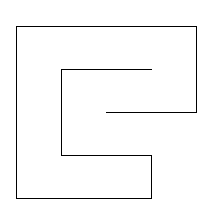 If entire subcomponents can be moved, there needs to be a hooking structure that prevents rotation on either end in either direction. I believe this is the shortest possible way to create a hook.

It seems that my answer fails here: 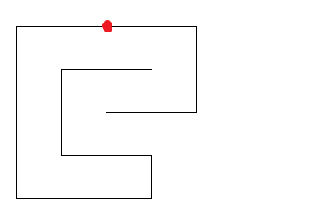 I'm leaving this answer here for posterity, but it is indeed incorrect.

Analysis of The Problem

Assuming we start with a line of length $L$ and then perform a sequence of bends $b_i$ of $\pm 90$ degrees on any integer point along the line $\in [1, L]$. We call that sequence a pattern $P$. We can extend the set of possible bends to $[-90, 90]$ to give us a sense of continuity. Bends of exactly $90$ degrees will be "whole bends" and other bends will be "partial bends". Patterns consisting of only whole bends will be called "whole patterns".

Definition A pattern is also unreachable if it's invalid. This is only slightly different from the question's definition of unreachable as it also applies to patterns without considering which bend is being made prior.

Corollary
Let $P^L_o$ by the pattern of the straight line of length $L$ without any bends. A pattern $P$ is unreachable if it is unreachable from $P^L_o$.

Now, we have some tools to work with.

There are actually two classes of unreachable patterns upon closer inspection.

11
Is every shape possible with a snake?

6
Aren't asteroids contradicting Euler's rotation theorem?
3
Fitting Shape in Circle for Shape Classification
4
3D Rotation Decomposition?
11
Is every shape possible with a snake?
5
Prove or disprove $p(|T|)\neq 0\longrightarrow \exists v\in V_c:R(v)\neq 0$
8
Is it possible to change position of the segment so that it is parallel to Y axis?
1
Plane vector rotation
1
Types of possible moves of tiling puzzle pieces
2
How can I calculate the area reachable by the tip of an articulated arm?