I'm in an argument with someone who claims that a two mile in 7:59 does not imply that one mile (at some point within the two miles) was covered in under 4:00. This is obviously wrong, but I'm not sure how to create a proof showing otherwise.

Does anyone have an idea for how to go about this?

The comment by André Nicolas is related to a very pretty theorem that deserves to be much better known. I first came across it in R.P. Boas's Traveler's Suprises, which appeared in The Two-Year College Mathematics Journal, 10 no. 2 (1979), pp. 82-88 (though I read it in the reprint that appeared in the highly recommended Lion hunting and other mathematical pursuits).

After giving the standard Mean Value Theorem problem ("if you travel in a differentiable way and your average speed is $50$ mph, is there some instant during which your instantaneous speed was exactly $50$ mph?") and a small variant ("Is there some small interval of time during which your average speed was also exactly 50 mph?"), he then gives two very similar but subtler questions:

If $f(x)$ is a continuous function, a horizontal chord of $f$ means a line segment with slope $0$ with both ends on the graph of $f$.

Here is Levy's version; you can easily see the similarity with Rolle's Theorem:

If $f$ is a continuous, real valued function on the closed unit interval such that $f(0)=f(1)$, then the graph of $f$ has a horizontal chord of length $\alpha$.

(Aside: You'll note this is exactly the argument Will Jaggy gives in his answer.)

Question 2 also has an affirmative answer if we drop the assumption that the travel did not include stopping or backing up, but according to Boas the proof is much more difficult (it comes from a generalization of the Universal Chord Theorem proven by Hopf, that any continuous curve that has a chord of length $1$ has a parallel chord of length $\frac{1}{n}$ when $n$ is an integer.; he cites Hopf's Über die Sehnen ebener Kontinuen und die Schleifen geschlossener Wege. Comment. Math. Helv. 9 (1937), 303-319.

The way you argue with these people is with pretty pictures. 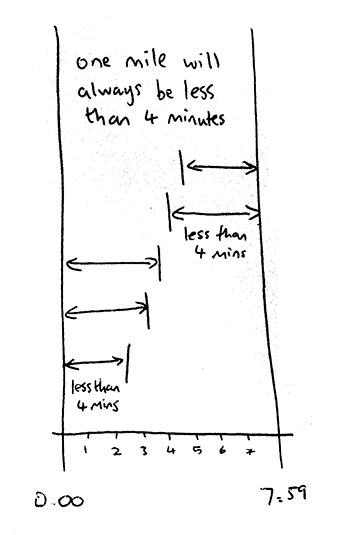 I think the simplest way would be to prove it wrong by assuming that the person is right.

Just to throw a relevant keyword into the discussion, the proof follows directly from the generalisation of the pigeonhole lemma to continuous intervals (notice that the “generalisation” section on Wikipedia describes a different generalisation which is non-continuous):

(I believe the generalisation is due to Gene Myers but it’s pretty easy to prove anyway.)

Suppose to the contrary that both miles were run at a time greater than or equal to 4:00. Then put together, the two miles were covered in at least 8:00. We arrive at a contradiction. Thus our initial assumption was incorrect. One mile must have been run in less than 4:00.

You can prove a stronger result: Either the first or the second mile of the race was run in under four minutes.

The argument can be explained geometrically.

Assume the time taken for each of the two miles is $x$ and $y$.

To fulfill (1) we have to meet the boundary shown in blue in Figure A.

Not the answer you're looking for? Browse other questions tagged average pigeonhole-principle or ask your own question.

5
Prove that if 2000 m is run in 4:50, then one mile is run under 4:00
13
Prove that at a party with at least two people, there are two people who know the same number of people…
4
Ramsey Type problem (variant of people at a party)
0
Why must average only be used with normal distribution?
0
How to compute Final Grade with assignment weightings?
0
For irrational real number $r$, find $n \in \mathbb{Z}$ such that $|nr - [nr]| < 10^{-10}$.
0
Proof of the lack of existence of a Hamiltonian Cycle
1
Board game question
0
What is more accurate in my situation: Average of averages, or average of all
3
Compositions of $20$ that have exactly $14$ summands