Is reduced homology a full functor on connected spaces?

No. There is an obstruction coming from the cup product, and so it will be easier to talk about cohomology. A simple family of examples when $X = Y$ is to take $X = Y = \mathbb{CP}^n$ for $n \ge 2$. As a graded ring with the cup product,

There are other subtler obstructions coming from more exotic cohomology operations, but over $\mathbb{Z}$ these are a bit hard to work with. In particular, even if the cup product vanishes there are still obstructions on the induced map on $\mathbb{Z}_2$ cohomology (which indirectly obstructs the induced map on $\mathbb{Z}$ homology) coming from the fact that it has to respect Steenrod operations.

It is nice to see so many elaborate examples, but here is a trivial one...

Later. The above example is for unreduced homology homology, but a similar sort of example (in that the obstruction comes simply from counting) can be used easily. Consider the poset 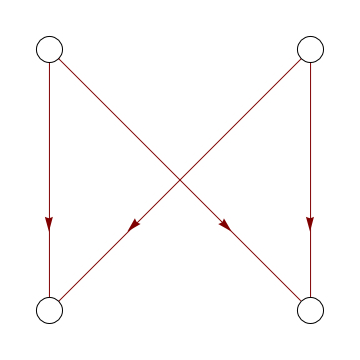 and endow the four point set with the order topology, and call it $X$. The space $X$ has the weak homotopy type of $S^1$, and therefore $H_1(X)\cong\mathbb Z$. There is a finite number of maps $X\to X$, simply because $X$ has only four points, and there are infinitely many maps $H_\bullet(X)\to H_\bullet(X)$, so some of the latter cannot be gotten from maps of the space.

Indeed, given any compact CW-complex there is a finite poset with the same weak homotopy type, and we can do the same silly counting argument to get examples.

Here are some aspherical examples.

To make things more interesting, take a 4-dimensional closed real-hyperbolic manifold with $b_2(M)>0$ (examples, again, abound). Since $M$ has zero signature, the group of automorphisms of the intersection form on $H_2(M)$ is infinite, while $Out(\pi_1(M))$ is again finite.

Edit. Here are some details:

Definition. A group $G$ is called Hopfian if each epimorphisms $G\to G$ is an isomorphism.

Malcev proved in 1940 that all finitely-generated matrix groups are Hopfian. (He noticed that each residually finite group is Hopfian and then proved that all finitely generated matrix groups are residually finite.) I will use this in the context of fundamental groups of complete hyperbolic and complex-hyperbolic manifolds. These groups are subgroups of $PO(n,1)$ and $PU(n,1)$ respectively (where $n$ is the real and complex dimension respectively). For instance, if $M$ is a hyperbolic n-manifold, then $M=H^n/G, G<PO(n,1)$, $H^n$ is the hyperbolic n-space.

Lemma. Suppose that $M$ is a closed oriented manifold with Hopfian fundamental group. Let $f: M\to M$ be a degree $\pm 1$ map. Then $f$ induces an automorphism of $\pi_1(M)$.

Corollary. If $M$ is a real or complex-hyperbolic manifold, then any degree 1 map $f: M\to M$ is a homotopy-equivalence.

Remark. It is an open problem, first posed by Hopf himself, if any degree 1 map $M\to M$ of a closed oriented topological manifold is a homotopy equivalence, see here.

Corollary. In the above setting, assuming that real dimension of $M$ is at least 3, there are only finitely many automorphisms $\phi: H_*(M)\to H_*(M)$ induced by continuous self-maps $f: M\to M$.

Proof. Suppose that $\phi$ is such an automorphism. Then, by looking at the action on the top-dimensional homology, $f$ has to be a homotopy-equivalence. Mostow proved (Mostow rigidity theorem) that each homotopy-equivalence $f: M\to M$ is homotopic to an isometry. (Wikipedia article states this only for hyperbolic manifolds, but Mostow proved much more!) Lastly, the isometry group of a closed real or complex-hyperbolic manifold (of any dimension $>1$) is finite. This follows, for instance, from the Arzela-Ascoli's theorem and the fact that an isometry homotopic to the identity has to be the identity map. qed

Not the answer you're looking for? Browse other questions tagged algebraic-topology homology-cohomology or ask your own question.

32
Use of Reduced Homology
13
The fundamental group functor is not full. Counterexample? Subcategories with full restriction?
7
Homology other than singular?
21
Homology Whitehead theorem for non simply connected spaces
2
Which maps on the zeroth homology do actually come from continuous maps?
5
Homology with local coefficients as a functor from pointed, path-connected spaces and $\pi_1$-modules.
4
Uniqueness of possibly non-simply connected universal covering spaces.
3
If $X \subset Y$ are topological spaces, is there any relation between their universal covers?