I have four points as shown in this figure: 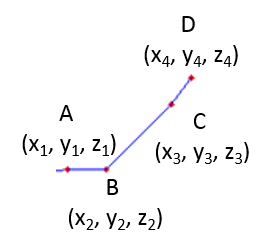 I want to calculate one vector for all these points. So, what would be the correct way:

Or is there any other possible solution?

First of all, welcome to Math Stackexchange!

There is no such thing as a single vector representation over all of these four points.

Mathematically, a vector in the Euclidean $\mathbb{R}^n$ is a tuple of $n$ numbers — for example $$\begin{pmatrix}a\\b\end{pmatrix},\quad a,b\in\mathbb{R} $$ If you consider the 2-dimensional case, just as in your question.

So, what are these vectors used for?

If you want to think in pictures, think of the vector as an arrow pointing 1 unit to the right and 2 units up. It has no certain starting point, by this definition, the vector just tells you about the direction! But if you use this vector to describe the location of a certain point, you have to imagine this arrow to be drawn from the origin. In this situation, the vector “points” to this point. If a vector describes the location of a point $A$, we usually write $\vec{OA}$ for it.

Another thing to do with vectors is describing the relative position of two points to each other. In this case, the arrow would start at point $A$ and then point to point $B$. For such a usage of a vector, we would write $\vec{AB}$.

Geometrically, one can “chain” tho vectors — mathematically, you just add them: $$\vec{AC}=\vec{AB}+\vec{BC}$$ Flipping the direction makes it negative in each component: $$\vec{AB}=-\vec{BA}$$

Back to your original question:

I want to calculate one vector for all these points

Apparently, it is just not possible to use one single vector for that purpose.

But either way, you will end up with four vectors.

EDIT: As I think this might be your actual conceptual problem: You can obtain a vector from $A$ to $D$ by “going over” $B$ and $C$ ($\vec{AD}=\vec{AB}+\vec{BC}+\vec{CD}$), but this would in the end result in one vector that just describes the relative position from $A$ to $D$ — but the information with the help of which vectors you calculated at is lost.

LATER EDIT: Let me add a bit about the component or basis notation:

But one can look at a vector as being a sum of each component:

And do not be confused by how I named the components: Because one might use vectors with more than three components some time, mathematicians tend not to use $x$, $y$ and $z$, but rather use for a vector $\vec{a}$ the components $a_1, a_2, \cdots, a_n$.

The second option would be upper-bounded by the first. See the triangle inequality.

Not the answer you're looking for? Browse other questions tagged geometry contest-math or ask your own question.

4
Distance between 2 points in 3D space (in spherical polar coordinates)
3
Given two points with 3D coordinates, and three angle observations, how to caculate the coordinate of the third point
0
Define the angle of the line which has two different points in 3D
1
Angle between points on plane representation of torus
0
Parabola through $3D$ space on vertical plane given $2$ points and vertex
2
Deriving the midpoint formula in 3D using the distance formula