With the exception of degenerate situations, a conic is uniquely determined by five points lying on it. Likewise, five lines tangent to a conic uniquely define that conic. With four points and one tangent line, there are in general two conics meeting these requirements, and by duality, the same holds for four tangents and one point. Two cases remain, one dual to the other, namely three points and two tangents and vice versa. In those cases, there are in general four possible solutions. Some of them may be complex.

What's the most elegant way to find these four conics which pass through three given points $A,B,C$ and are tangent to two given lines $g,h$? 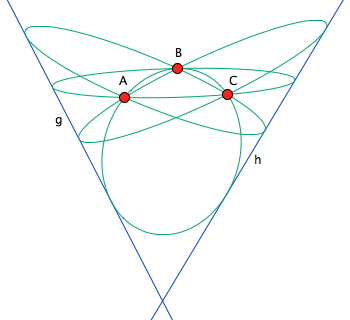 I have some algorithm to do this, but its core lies in finding roots of two distinct quartic equations, one for either touching point, and then pairing solutions numerically. The coefficients of the quartic equations are huge, both in term of space they need to write down and of how big the numbers get. I might add this approach as an answer eventually if nothing better turns up.

I hope someone finds a way to translate this problem into the intersection of two conics, in such a way that each point of intersection corresponds to one solution without any need to match things. But other elegant solution would be welcome as well.

The comment by Narasimham made me aware of a very elegant way of tackling this problem. The figure above can be interpreted as the orthogonal projection of a right cone whose axis lies in the plane. The cone intersects the plane in the two lines, $g$ and $h$. The points $A,B,C$ are in fact points on the cone, so they lie either above the plane or below the plane but are projected orthogonally into the plane. These three points in space define a plane, and that plane intersects the cone in a conic section. The orthogonal projection of that conic section is again a conic section, namely one of the four indicated in the figure. The four different solutions come from different choices about which of the points $A,B,C$ lie above the plane and which below. Since reflecting everything in the plane doesn't affect the resulting projected conic, one of the three points can be chosen arbitrarily, while the other two each allow for two possible choices, leading to $2^2=4$ generally distinct solutions.

If we introduce new symbols $p_i$ for the coefficients of this plane, we can shorten this to

This is a homogeneous quadratic equation in $(x:y:w)$ and as such describes a conic in the original plane. Now one might want to undo the projective transformation which led to the special coordinates, and then we are done. The four possible choices for the signs of $\pm\sqrt a$ and $\pm\sqrt b$ will lead to the four possible conics.

Not the answer you're looking for? Browse other questions tagged conic-sections algebraic-curves projective-geometry constraints or ask your own question.

2
Determining a conic section from points and tangent lines
4
Given a pair of conics, construct (synthetically) their shared tangent lines
5
Projective and affine conic classification
2
Constructing a conic from two point-polar pairs
0
Prove: If the five points of a conic are rational, then it contains infinitely many rational points.
5
What is the equation for an ellipse given 3 points and the tangent line at those points?
6
Is there a geometric construction that finds the intersection of two conics, given only five points on each?
1
Chosing points so that $5$ tangents determine a conic
2
Different types of pencil of conics in the projective plane
1
Conics consisting of two points/lines makes them rank 2