The Product of Two Gaussian Random Variables is not Gaussian distributed:

What is going on here?

When (what physical situation) is described by one, and what by the other? (I think a few real world examples would clear things up for me)

On the other hand, even in the case that $X$ and $Y$ are IID standard normal random variables, their product is not itself normal, as the links you provide show. The product of $X$ and $Y$ is a scalar-valued random variable, not a vector-valued one as in the above case.

1.) The first example is already sufficient. Just to throw in another one for a sum of Gaussian variables, consider diffusion: at each step in time a particle is perturbed by a random, Gaussian-distributed step in space. At each time the distribution of its possible positions in space will be a Gaussian because the total displacement is the sum of a bunch of Gaussian-distributed displacements, and the sum of Gaussian variables is Gaussian.

2.) The second situation (product of Gaussian PDFs) is confusing because the resulting function is a Gaussian, but it is not a probability distribution because its not normalized! Nevertheless, there are physical situations in which the product of two Gaussian PDFs is useful. See below.

TL;DR - a physical example for a product of Gaussian PDFs comes from Bayesian probability. If our prior knowledge of a value is Gaussian, and we take a measurement which is corrupted by Gaussian noise, then the posterior distribution, which is proportional to the prior and the measurement distributions, is also Gaussian.

As is fashionable in beysian probability, we throw out the value $P[\tilde{X}]$, because it doesn't depend explicitly on $X$, so we can ignore it for now and normalize later.

Now, our assumption is that the prior, $P[X]$, is Gaussian. The measurement model tells us that $P[\tilde{X}\mid X]$ is Gaussian, in particular $P[\tilde{X}\mid X] = N[\Sigma_{\epsilon},X]$. Since the product of two Gaussians is a Gaussian, the posterior probability is Gaussian. It is not normalized, but that is where $P[\tilde{X}]$ (which we "threw out" earlier) comes in. It must be exactly the right value to normalize this distribution, which we can now read off from the variance of the Gaussian posterior.

What you should really take away from this is that Gaussians are magical [1]. I don't know of any other PDF which has this property. This is why, for example, Kalman filters work so darn well. Kalman filters utilize both of these properties, and that is how you get a super-efficient algorithm for state estimation for a linear dynamical system with Gaussian noise.

[1] - Gaussians are not actually magical, but perhaps they are mathemagical.

In brief, you were confused by two totally different concepts.

Now are the savings of a kid normally distributed? We know the mean, median, mode of a normal distribution are same as it is symmetric with a standard deviation.

Intuition 2 (Multiplying Gaussian PDFs): Now you're multiplying not the numbers but the functions together. The multiplying is just a bunch of algebra and the resulting function also fits the form factor of a Gaussian. The proof for that is given in your link. It means if you have populations of kids there will be a Gaussian representing their savings with some average savings from each sub population. Basically, a mixture of gaussians is a gaussian. See https://en.m.wikipedia.org/wiki/Mixture_model for how various distributions mix. It’s useful for building machine learning models. Maybe given distributions of daily savings and total savings you want to establish the distribution of how long the kids tend to save.

I am surprised @heropup's answer is accepted, because the original question is about the product of two Gaussian PDFs resulting in a new, scalar PDF (instead of a vector joint PDF like @heropup supposes). Although we have two Gaussian PDFs of different variables, i.e.

they are multiplied by assuming some dummy variable $t$: 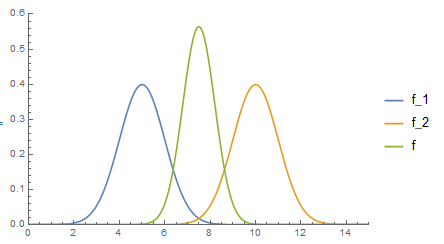 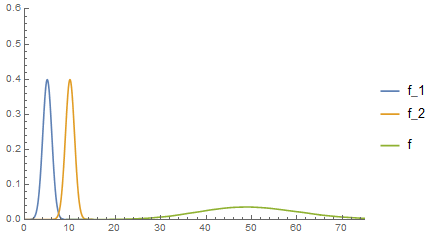 Note that $f$ in this plot is generally not Gaussian.

Not the answer you're looking for? Browse other questions tagged probability intuition or ask your own question.