I have this idea for a graph but don't know what function could describe it better.

The idea is something like the "squared" function turned $90$ degrees to the right, so that possible values for $x$ are always positive and $y$ may be both positive and negative.

The graphs of $\sqrt x$ and $-\sqrt x$ combined look good too, but I don't know how to write that as a single function (eh, I'm so bad with these things).

Basically, anything that may look like this will do.

Looking forward to some solution.

The bad news: You cannot express a sideways parabola as a function of $x$. Why? Let's go back and look at a restriction on functions:

Vertical Line Test: For a relation to be a function, it must (colloquially) pass the vertical line test. That is, you must be able to draw a vertical line anywhere on the relation's graph and the line must intersect the relation in at most one point. 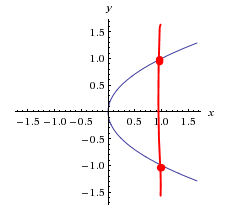 However, the good news is that one may still describe such a graph with mathematical notation. Two such ways are below, but keep in mind that they are not functions of $x$.

The graph you describe will have equation $x=y^2$.

You cannot write it in the form "$y=\langle\hbox{function of $x$}\rangle$" because, just as you pointed out, every $x>0$ will correspond to two $y$ values, not just one.

I'm not actually sure what you mean by writing it as a single function as it has two branches (the positive and the negative one).

By using parametric equations to express both $x$ and $y$ as functions of $t$, you can describe curves that are not necessarily functions of $x$.

Not the answer you're looking for? Browse other questions tagged algebra-precalculus functions graphing-functions or ask your own question.

7
how do you graph a function?
0
Determining quadratic coefficients without function
2
Sketching the graph of trigonometric functions involving absolute value function
1
$y= | \sqrt x |$, should the graph extend to include complex numbers?
1
How do we know that a function's graph is an accurate representation of its solution set?
1
On The Shape Of Trig Graphs To A Precalc Student
0
What is the SSCG function?