Applying linear algebra to solve a problem in mechanical equilibrium

I came across the following problem in "Introduction to Applied Mechanics" by Gilbert Strang, and am a little confused about the solution to this problem. The following figure shows the problem. 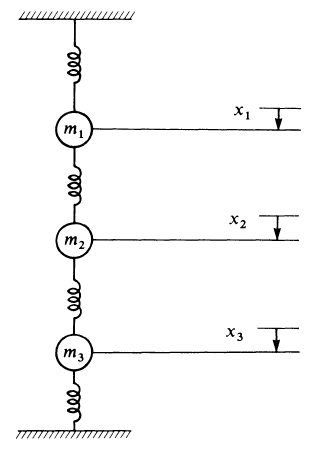 The following vectors are defined for the problem,

Thus the elongations of the $i^{th}$ spring is given by, $e_i = x_{i-1} - x_{i}$. This means that an upward movement of the mass above the spring, and the downward movement of the mass below the spring will result in elongating the spring, and thus positive elongation. It must be noted that $x_0, x_4 = 0$ as these correspond to the boundary conditions represented by the walls on which the ends of springs 1 and 3 and clamped.

The forces in the springs (positive for tension, and negative for compression) is given by the following,

Now the force on the $i^{th}$ mass is $f_i = y_i - y_{i+1}$. If the spring above the $i^{th}$ mass is under tension then $y_i$ will be positive, and will tend to pull the mass upwards, and thus it has a positive contribution $y_i$ to the force on the mass. The opposite is true for the spring below the mass, thus has a negative contribution $y_{i+1}$.

Can someone tell me where I am going wrong?

And he has $e_i = x_{i} - x_{i-1}$ (the opposite of your equation), which makes sense because $x_0=0$ and the obvious physical intuition is that $e_1>0$, i.e. the first/top spring is elongated. Besides the obvious "why would want to do that?", you cannot just pick arbitrary signs for the elongation and force in Hooke's law; they are correlated (in sign) or else the force changes its meaning.

The $\mathbf{A} = \mathbf{B}^\mathrm{T}$ equality holds only if the axes for measuring $\mathbf{x}$ and the forces $\mathbf{f}$ is the same, including orientation/sign. You have flipped the sign/direction of one axis (i.e. of $\mathbf{x}$) but not the other one ($\mathbf{f}$), i.e. your forces are still positive downwards as in Strang's book.

To see this more easily, consider the reduced/simplified problem where you only have one object between two springs one from top, the other from the bottom: 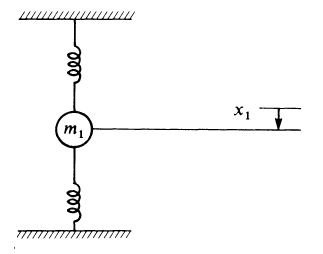 So the elongations of the two springs necessarily have equal magnitude, but have opposite signs: $e_1=x_1$, $e_2=-x_1$ in the same reference system. Obviously

This is physically ok because from an external point of view the two springs exert forces in the same direction since compressing one spring means elongating the other by the same amount. So any other force that has to work against these two springs, like the gravitational force due to the mass $m_1$, has to equal (be in equilibrium with) $\mathbf{f}$, i.e.

This is as if the springs were actually in parallel if both were attached to the same surface; you can visualize this by rotating the bottom surface (while keeping the spring attached) until you glue it to the top one.

So let's see now what happens in this simpler system if we consider $x_1$ positive going up instead, i.e.

You'll obviously get the stiffness matrix to change sign, i.e. $\mathbf{f} = -k_1x_1 - k_2x_1$, which corresponds to expressing Hooke's law (for both springs) in terms of the reaction force. Exactly the same thing happens in the general case: if you flip the axis of reference for $\mathbf{x}$ and keep the one for $\mathbf{f}$ unchanged you get a change of sign in the stiffness matrix. This is actually explained a bit later in the book as "Positivity means that when all the forces $f$ go in one direction, so do all the displacements $x$."

Not the answer you're looking for? Browse other questions tagged linear-algebra applications classical-mechanics or ask your own question.

0
Frictional forces and their directions
4
How to solve equation of motion for multiple pulleys
2
Forming equations for damped Simple Harmonic Motion
1
Using Hooke's Law with simple harmonic motion
1
How to obtain the mass of a particle rotating around an axis when the difference of tensions in a wire are known?
1
How to find the elongation of a spring when it is tied to a brass bar over a tilted wall?
0
How to find the acceleration of a cart sliding over a wire?
0
A mass weighing $16$ pounds stretches a spring $\frac{8}{3}$ feet