Question about Definition of Boundary in Stokes' Theorem

Edit: I was discussing with my teacher and we think the above is the case (although I would really like someone to please confirm) but interestingly depending on how you parameterize a surface you may get similar but not exactly the same results for the boundary curve by following the above method, although you do get equivalent results if you account for direction, and the same answer via two parametrization makes me think I'm on the right track. To demonstrate what I mean let me use an example. Call the surface S the part of the sphere $x^2+y^2+z^2=4$ above the plane $z=1$. The boundary curve is obviously the intersection of the plane and the sphere, that is the circle $x^2+y^2=3$ (and $z=1$). It seems from the fact that we can get this result using the method that traces the out the boundary curve by mapping to the surface along the domain using two different parametrizations that this definition of a boundary curve is correct (though note that the spherical one requires that two parts cancel each other out). Example: 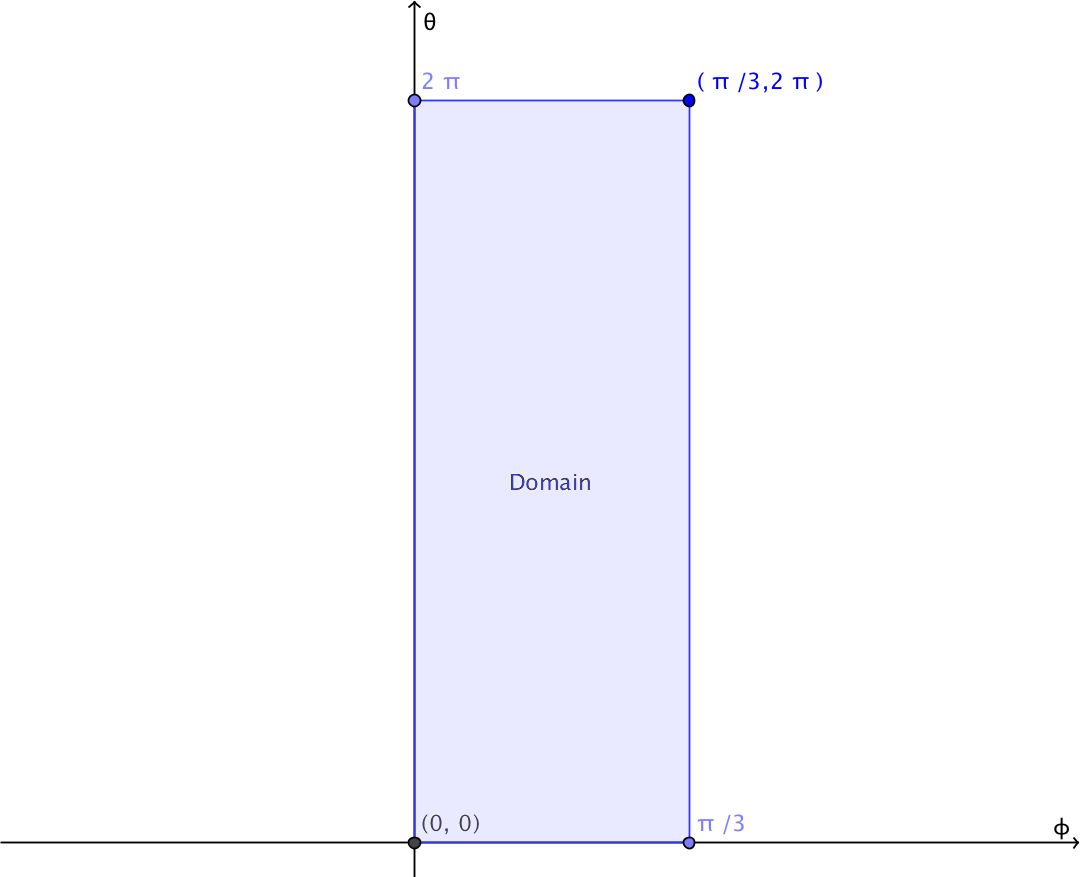 Going along the bottom ($\theta =0, \phi$ varying to $\frac{\pi}{3}$) gives us a downward arch along the sphere from the top to the bounding circle. Similarly, going along the right gives us the bounding circle, going along the top gives the arch but in the opposite direction (so they cancel -- I presume) and at $\phi=0$ moving down the last side of the rectangle (where $\theta$ is varying from $2\pi$ back to $0$) all we get is a point which doesn't contribute to the curve leaving us with the same boundary curve to S. To recap, as we map to the surface alone the boundary of the domain, we go from the "north pole", down a longitude to the 60-degree latitude, around the latitude 360 degrees and back up the same longitude to the north pole, gibing us the boundary circle.

In both cases you get the "boundary ring" by mapping to the surface along the boundary of the planar domain region. I was wondering if this method can be a general definition of the boundary of a surface. If someone could confirm or correct that would be great.

You are asking a very good question. The problem, however, that a proper answer to it lies beyond the class you are taking. You should consider reading, say, Spivak's Calculus on Manifolds or the book by Guillemin and Pollack Differential Topology.

Here is the upshot: There is a concept of an (oriented) differential manifold with boundary, it is a bit abstract, but the key is that it allows you to define the notion of boundary which is independent of the parameterization that you use. A 2-dimensional manifold is simply a surface. Instead of trying to "parameterize" a surface $S$ (or, more generally, a manifold $M$) via a single map of a planar region, you consider a collection of maps from the closed upper half-plane $\{(x,y): y\ge 0\}$ to your surface. These maps $f_i$ (called charts) are required to be 1-1, which allows you to consider the compositions $f_i^{-1} \circ f_j$. These compositions are called transition maps. Each transition map is required to be differentiable (say, infinitely-differentiable, just to be on the safe side). The boundary points of the $S$ are defined as points which are images of points of the x-axis under charts. One verifies that if $p$ is in the image of the x-axis under one chart, then the same is true for any other chart whose image contains $p$.

Another useful thing that you learn by reading either of these books is that Stokes' theorem holds not only for surfaces with boundary but for manifolds with boundary of arbitrary dimension and in this form it includes all fundamental theorems of multivariable calculus (Stokes, Green, Gauss) and can be written as $$ \int_{M} d\omega = \int_{\partial M} \omega, $$ where $M$ is a compact $k$-dimensional manifold with boundary $\partial M$, $\omega$ is a differential form of degree $k-1$ on $M$ (this is a replacement of vector fields which you see in the multivariable calculus), while $d\omega$ is the exterior derivative of $\omega$, which is the proper replacement of Curl and divergence.

Not the answer you're looking for? Browse other questions tagged multivariable-calculus differential-geometry definition vector-analysis surfaces or ask your own question.