I have some troubles with the general idea of curve sketching.

Calculating those informations are no problems for me.

However when it comes to sketch the curve I always make mistakes. I have problems by drawing the line because I don't know from which side or which direction it goes when $x = +∞$, $-∞$. How do you sketch this curve step by step. 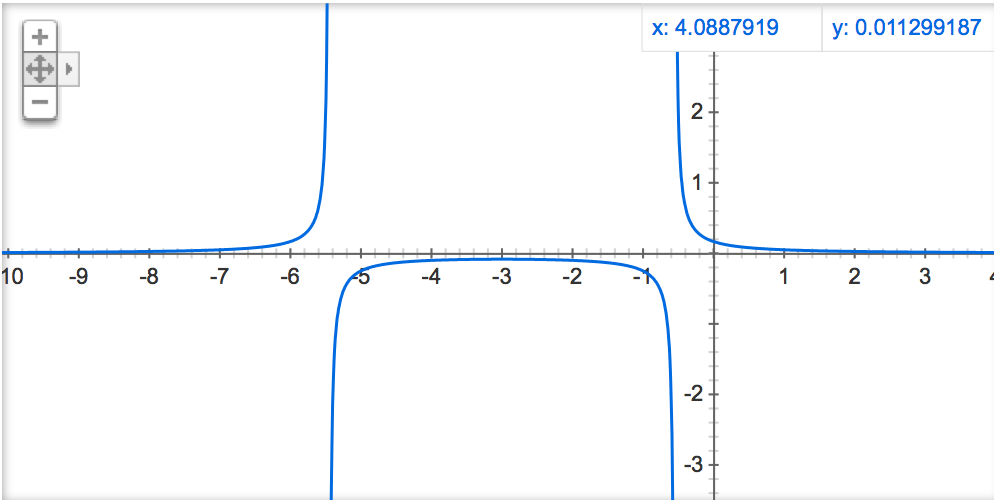 For your example, let's figure out what it looks like at the far right of the diagram. Here we have passed all the relevant points of interest, and your calculations tell you that it is going to zero. But is it approaching zero from above or below? Take the function $f(x)=\frac1{2x^2+12x+6}$ and plug in a really large value of $x$. You don't need to do this with a calculator, just pick a number that you know will be bigger than everything else in the problem, say $x=1000000$. In this case you have the denominator being $2(1000000)^2+12\cdot1000000+6$, which is quite obviously positive and large, since the first term is so big that the others are just small potatoes compared to it (although in this case they are also positive). Since the numerator is just $1$, it is dominated by this big number.

This tells you (a) that it goes to zero, and (b) that it does so from above, because the reciprocal of a large positive number is a small, positive number. Of course, for the above analysis there's no need to actually plug in $x=1000000$; it suffices to note that $2x^2$ will dominate the other terms, so it will be positive for large $x$. Similarly, at large negative $x$, $2x^2$ will be large and positive, so we expect it to approach zero from above on the right side too.

Now let's look at the two singularities. The work we've done so far is already sufficient to figure out the behavior here, since it starts on the positive side, shoots off to infinity at the left pole, comes back from negative infinity since it's a simple pole, then doesn't cross the $x$-axis (there are no roots) and turns around to negative infinity, and comes out from the positive infinity side to meet our earlier asymptote to zero from above. But let's look at this process in a little more detail.