Deriving the Surface Area of a Spherical Triangle

A triangle on a sphere is composed of points $A$, $B$ and $C$. The $\alpha$, $\beta$ and $\gamma$ denote the angles at the corresponding points of the triangle: 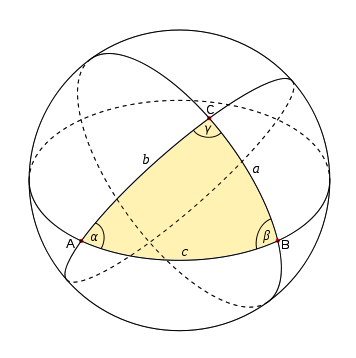 The Girard's theorem states that the surface area of any spherical triangle:

I'm wondering how to derive this formula.

Could you please help explain this clearly?

Notice now that $P_A\cup P_B\cup P_C$ is the entire sphere, and that $P$'s intersect at the triangle + the opposite triangle. We thus have:

As the two triangles have the same area, you get your formula.

A bit late to the party, but we can also use Gauss-Bonnet theorem, which can be used for other $2$-dimensional manifolds as well, e.g. the hyperbolic plane. It states that if $M$ is a $2$-dimensional Riemannian manifold with piecewise smooth boundary, then $$\int_M K dA +\int_{\partial M} k_g+\sum_i \alpha_i=2\pi \chi(M) $$ where $K$ is the Gauss curvature, $k_g$ the geodesic curvature (which is zero for geodesics), $\alpha_i$ the angles by which the tangent to the boundary turns at points where $\partial M$ is not smooth, and $\chi(M)$ the Euler characteristic of $M$.

A spherical triangle is formed by connecting three points on the surface of a sphere with great arcs; these three points do not lie on a great circle of the sphere. The measurement of an angle of a spherical triangle is intuitively obvious, since on a small scale the surface of a sphere looks flat. More precisely, the angle at each vertex is measured as the angle between the tangents to the incident sides in the vertex tangent plane.

Theorem. The area of a spherical triangle ABC on a sphere of radius R is

SABC=(∠A+∠B+∠C−π)R2. (1) Incidentally, this formula shows that the sum of the angles of a spherical triangle must be greater than or equal to π, with equality holding in case the triangle has zero area.

Since the sphere is compact, there might be some ambiguity as to whether the area of the triangle or its complement is being considered. For the purposes of the above formula, we only consider triangles with each angle smaller than π.

An illustration of a spherical triangle formed by points A, B, and C is shown below.

Note that by continuing the sides of the original triangle into full great circles, another spherical triangle is formed. The triangle A′B′C′ is antipodal to ABC since it can be obtained by reflecting the original one through the center of the sphere. By symmetry, both triangles must have the same area.

Proof. For the proof of the above formula, the notion of a spherical diangle is helpful. As its name suggests, a diangle is formed by two great arcs that intersect in two points, which must lie on a diameter. Two diangles with vertices on the diameter AA′ are shown below.

At each vertex, these diangles form an angle of ∠A. Similarly, we can form diangles with vertices on the diameters BB′ and CC′ respectively.

Note that these diangles cover the entire sphere while overlapping only on the triangles ABC and A′B′C′. Hence, the total area of the sphere can be written as

Ssphere=2SAA′+2SBB′+2SCC′−4SABC. (2) Clearly, a diangle occupies an area that is proportional to the angle it forms. Since the area of the sphere is 4πR2, the area of a diangle of angle α must be 2αR2.

Hence, we can rewrite equation (2) as

Not the answer you're looking for? Browse other questions tagged geometry spherical-geometry or ask your own question.