Can we determine if a binomial coefficient $C(n,p)$ is even or odd, without calculating its value? ($p\lt n$, $p$ and $n$ are positive integers)

I also want to take this opportunity to mention a paper which discusses generalizations of this problem, and which is both quite entertaining to read and perhaps has one of the strangest titles of any math paper: Granville's Zaphod Beeblebrox's Brain and the Fifth-Ninth Row of Pascal's Triangle.

Motivated by a duplicated question that has been asked today, I'd like to offer an alternative approach to the problem.

Thus, we have a method that allows to obtain the parity of $\binom nr$ in at most $\log_2 r$ steps.

I'm surprised that noone mentioned this. 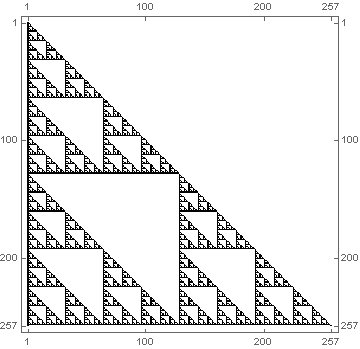 You get a pattern that is exactly the Sierpiński triangle. Analyzing this pattern leads naturally to a way to compute directly the parity of ${n\choose p}$.

Not the answer you're looking for? Browse other questions tagged binomial-coefficients parity or ask your own question.

8
Generalizations of the number theory concepts of “even” and “odd”?
5
Odd and Even Parity in Proofs
51
Is an irrational number odd or even?
2
Subtracting even and odd binomial coefficients?