How to find an ellipse , given 2 passing points and the tangents at them?

Please answer to a question , how to find an ellipse which passes the 2 given points and has the given tangents at them. And one related question is that the given condition can decide just one ellipse which satisfies it?

Edit : May be , I can say the first answer (by Mr. André Nicolas) is for the general case. Is there no special case where only a finite set of ellipses satisfies the condition?

Edit : According to the answers and comments , I can compute an arbitrary chosen ellipse for my condition (using the method by Mr.Patrick Da Silva). But there are possibly many others which satisfy my conditions. Am I right?

Here is a complete characterization of all possible ellipses that satisfy the given criteria.

Here are some figures from my answer to a duplicate question that I had not realized was a duplicate. The ellipses are shown for $a=\frac12,0,-\frac12$. 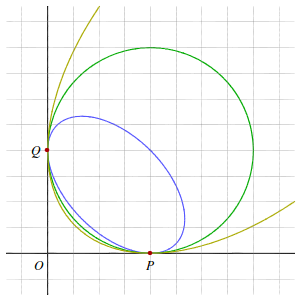 Case 2: The two tangents are parallel and neither passes through both points. Then there is an affine transformation mapping $P$ and $Q$ to $(-1,0)$ and $(1,0)$, and the tangents to lines parallel to the $x$-axis. Now there is an infinite family of ellipses given by André Nicolas which satisfy these conditions, namely $ax^2 + y^2 = 1$ with $a > 0$.

Update: See these two previous posts for a way to choose the best ellipse from this one-dimensional family of ellipses, where by "best" we mean the one with the least eccentricity:

It's easier than you think. 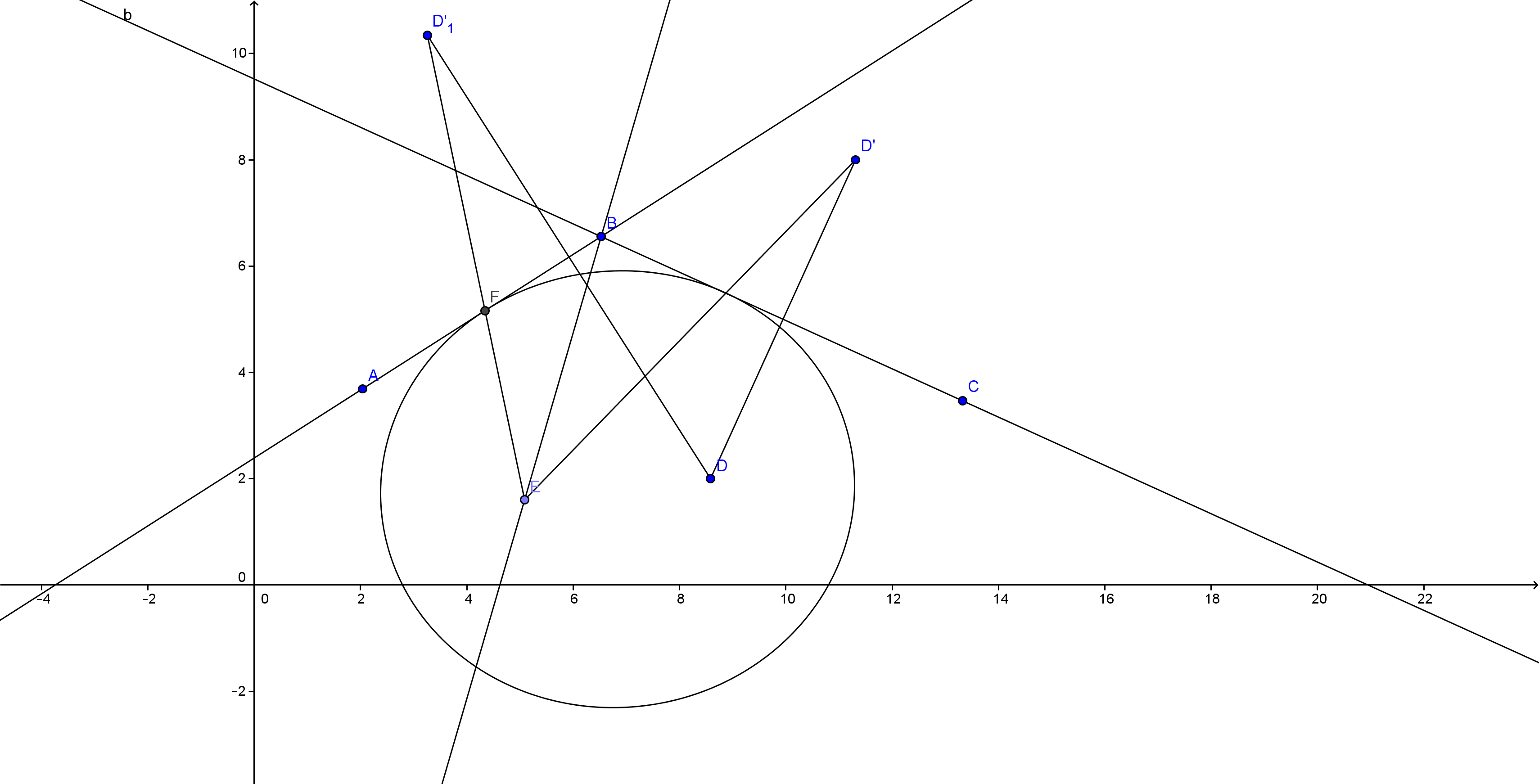 You can do it to be tangent to any two lines like for example in this picture $AB$ and $BC$: 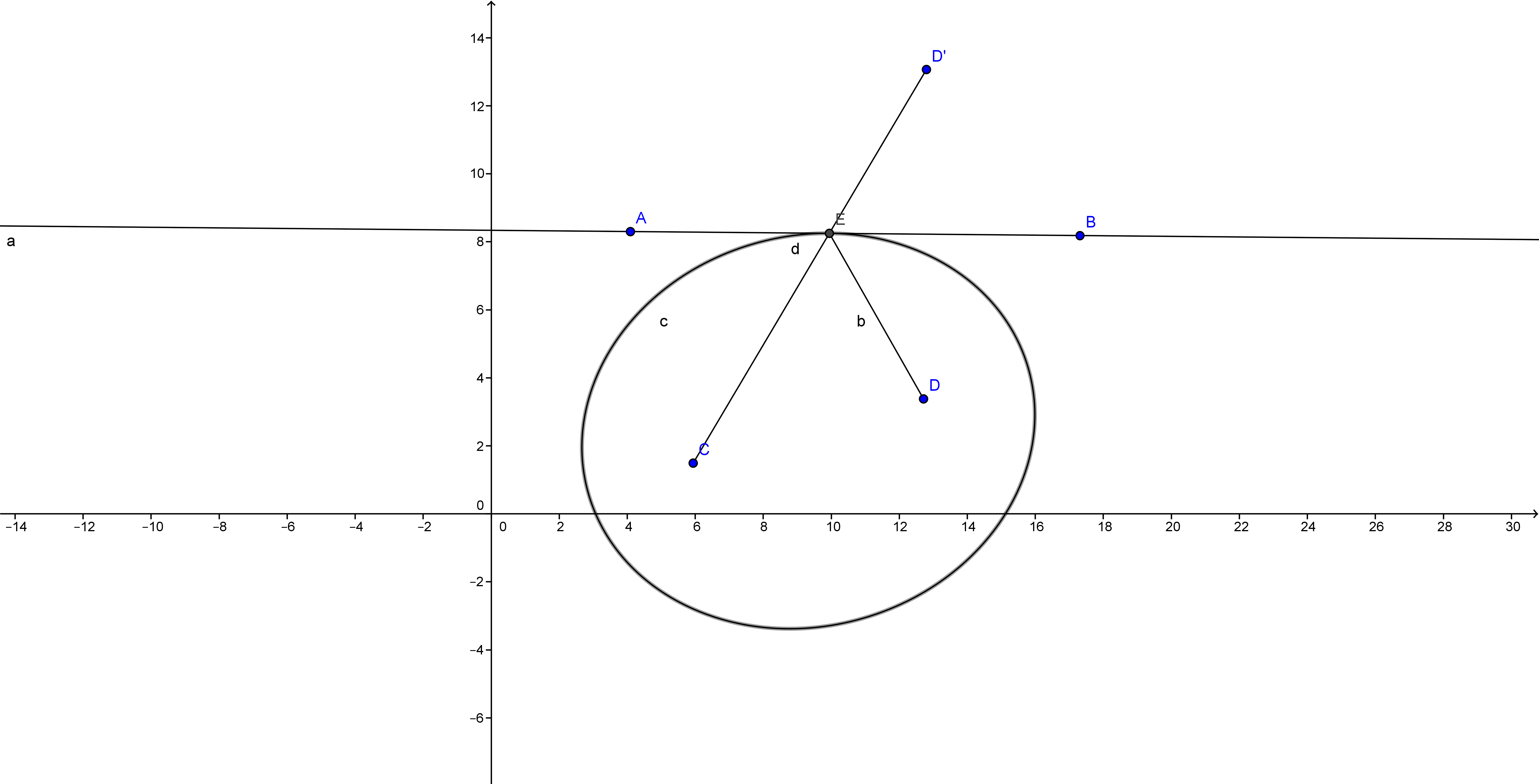 And you can prove this (in the second pic):

So how to find this point?

Answer: Reflect the point $D$ on the line and name it $D'$ then the value $CE+DE=CE+D'E$ and its minimum when the three points $C$ and $E$ and $D'$ are collinear (the nearest distance between two points is the straight line).

So why its tangent?

Because if that is not the minimum value for example the point $E'$ then there exists a second point like $E''$ that $CE'+DE'=CE''+DE''$ (because the amount increases continuously if u move the minimum point to either right or left so for every point in the right there exists one on the left) then it is obvious that the ellipse would intersect the line at two points $E'$ and $E''$. Then its not tangent but for the minimum value its only one point.

Please e-mail me if this was helpful (ariahala@gmail.com)

There are infinitely many ellipses, even assuming that the two tangent lines intersect.

This follows from the very nice property of an ellipse:

Basically, if you shoot a laser from $B$ to any point on the ellipse, and the ellipse is a perfect mirror, then the reflected ray will pass through $A$!

This can be proven using the physics principle: light takes the route which takes the shortest time. Using the fact that locus of an ellipse is $PA + PB = $ constant, if light from $B$ reflected on the ellipse has to take the shortest time, it can be shown that it has to pass through $A$.

This gives us a way of generating multiple ellipses.

Suppose the given points are $P$ and $Q$ and the tangents ($p$ and $q$ respectively) intersect at $O$, also assume that $\angle{POQ}$ is not acute.

The two tangents divide the plane into four regions. Consider the region $R$ which contains both $P$ and $Q$ on its border.

Now we can pick multiple lines parallel to $B_1B_2$ and use that to get multiple ellipses (at most two parallel lines can give the same ellipse).

EDIT: As Rahul's comment points out, I assumed implicitly that the ellipse was centered at the origin. This is important ; for everything to work out well here, you need the two points to be linearly independent vectors, the center must be assumed at the origin and obviously the tangent lines must not got through the origin. Since there is no ellipse over which two linearly independent points have parallel tangent lines, we must also assume that the tangent lines are intersecting somewhere else than at infinity.

A conic curve (as an ellipse) is in general given by 5 points. If 2 of these points get very close together, we can see that this condition in the limit is equivalent to give a point and the tangent at that point. So there are in general infinite solutions (2 points and 2 tangents are "equivalent" to 4 points and then we have another point left)

Added: Projective transformations are powerful tools to treat this type of problems.

One reasonable way to choose the "best" solution is to minimize the eccentricity of the conic. They show you how to do this in the following paper:

If you want an implicit equation of the conic in the form $f(x,y)=0$, you have to eliminate $t$ from the first equation above. Then you can use standard eigenstuff techniques to get the center, rotation, and semi-axis lengths of the ellipse.

I think you'll find that center of the ellipse lies on a line passing through tangent intersection and the midpoint of the secant between those points... Incidentally, it's a property I found myself when faced with this problem, and only later found it corroborated in a book (Matematische Formelsammlung, from 1950-and-something). That will give you 5th equation needed to solve for $ x_0 , y_0 , a , b, and \ \phi $.

3
Determine ellipse from two points and direction vectors at those points
1
Defining/constructing an ellipse
1
Solve for an Ellipse Tangent to 2 Lines
1
Can I define a 2-D ellipse via two points and their respective tangents?
13
Roundest ellipse with specified tangents
2
Hyperbolic local replacement in the neighborhood of a curve's vertex
1
Are two ellipse arcs always almost identical if they have the same end points and the same center of ellipses?
1
Finding centers of ellipses with two points and their respective tangents
1
Calculation method for a British Standard based on finding an ellipse given tangents?
1
Defining ellipse using points and normal vectors from them
See more linked questions

1
Are two ellipse arcs always almost identical if they have the same end points and the same center of ellipses?
1
Calculation method for a British Standard based on finding an ellipse given tangents?
1
Finding centers of ellipses with two points and their respective tangents
3
Is it always possible to draw an ellipse given any two points and the center?
3
How to get the angle between the inner common tangents to two general ellipse
1
How to get the angle between the imaginary inner common tangents when two ellipse intersect with each other
4
Construct focii of ellipse given center and four tangent lines