Reflexive, symmetric and transitive closure of the following graph

First of all, I have to understand which relation this graph represents: 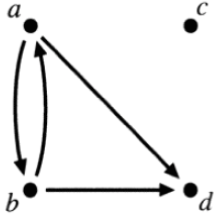 The relation drawn above, I think, can be described as follows on $A^2$:

I have first a more formal question: what would be the set build for this relation?

Now, since I am a newbie, I will just try to give the reflexive, symmetric and transite closure for the relation or to discuss the problems that I have:

If you could try to correct me, if I am wrong, it would be great :)

On the premise that an element points to an element it is related to, this diagram is correct, yes.

I have first a more formal question: what would be the set build for this relation?

Do you mean expressing $R_A$ in setbuilder notation? If so, I'm not sure if there's a proper means of doing so that doesn't feel somewhat "off," at least to me. The definition that comes to mind is

If anyone has a better idea I'd love to hear it, because this mostly just seems to be the definition of a relation (in terms of a set of ordered pairs).

Indeed, that's the idea: the "closure" of a property for a relation is the relation given, plus those you need to get that property to hold. This ambiguity for you is why I might express the closure as, instead

since it makes it clearer which elements you added to $R_A$.

Graphically, imagine making this closure as drawing lines so that each element points to itself: 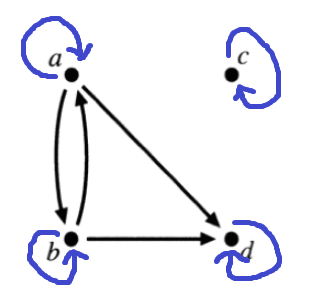 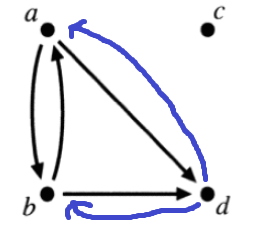 Yup. For this, graphically, you need to envision it like so: if you can follow two consecutive lines from one element to another and then to a third, you also need a line going directly from the first to the third. The only such chains you can make are

and the latter two are already in the graph. So you just have 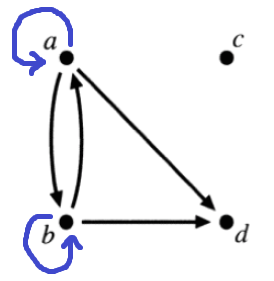 So in summary, what you did seems fine.

(Though you did post this years ago so I imagine you don't really need this confirmation and help now, but if nothing else this might help others in the future and also gets this off the unanswered list.)

Not the answer you're looking for? Browse other questions tagged proof-verification relations or ask your own question.