Finding the location of an image of the Mandelbrot set

I've got an image of a segment of the Mandelbrot set that I generated with an iPhone app a long time ago (I use it as my background image). I now have no idea where in the set the image came from. 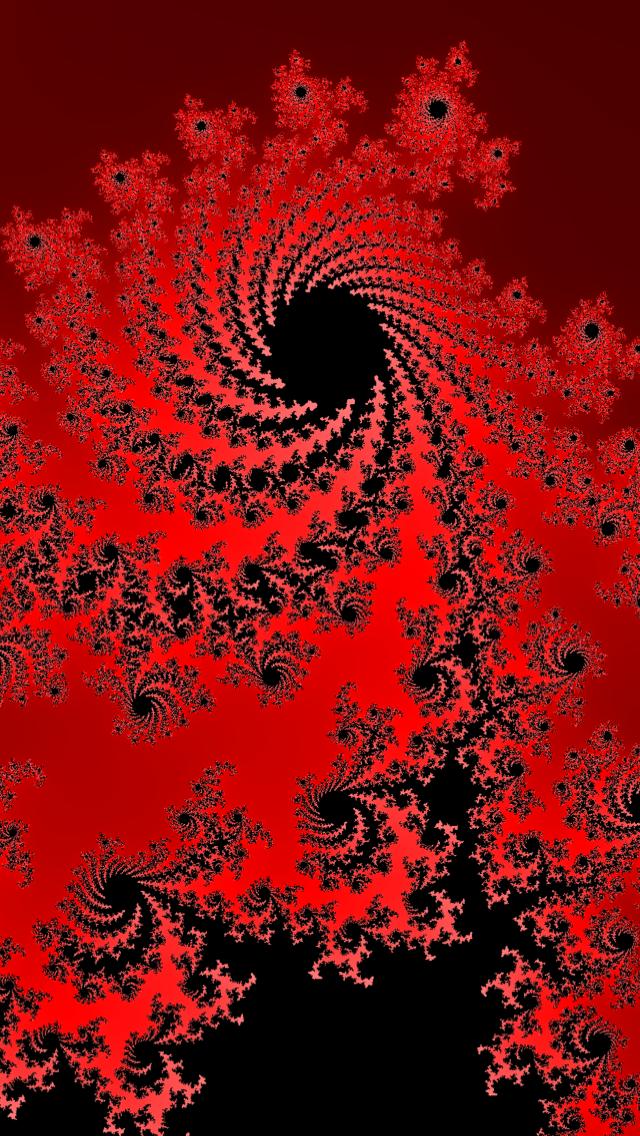 Are there mathematical tricks I could use to help find the location in the set, which would make the search faster than brute-force?

In Mathematica V10, we can generate an image very much like yours with the following command: 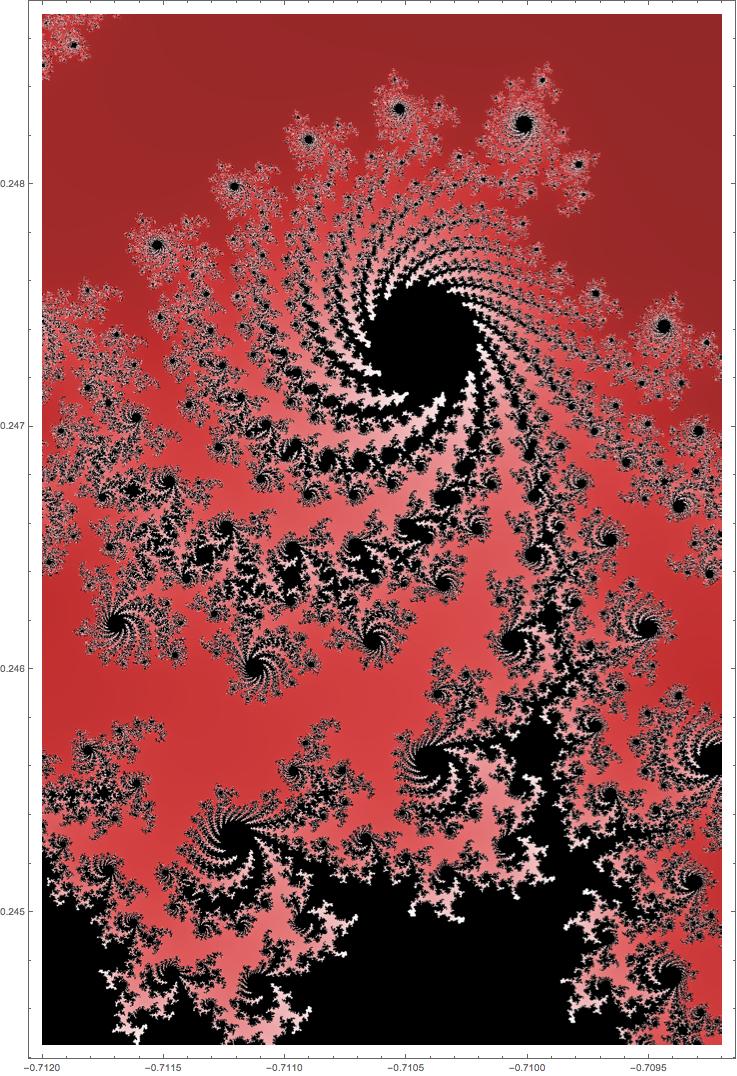 Of course, it might make sense to increase the iteration count. Here's the same image with MaxIterations set to 1500. 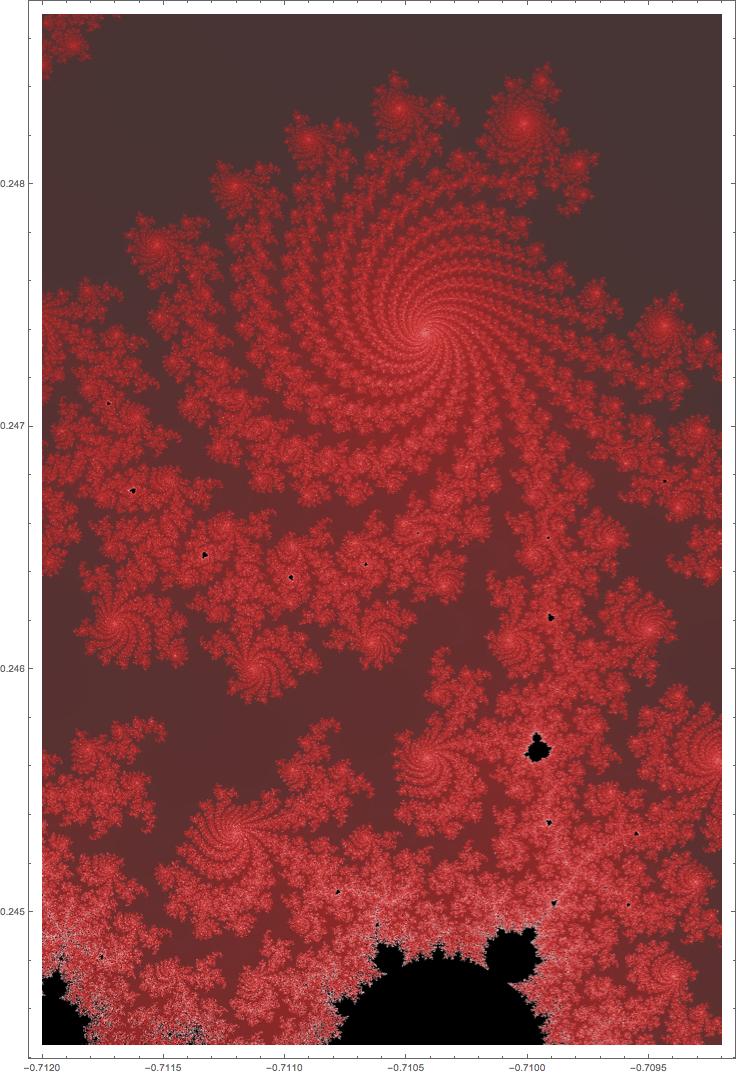 The key geometric feature that allows us to find this is the spiral pattern. There are 13 arms spiraling in to the Misiurewicz point near the top of the figure. That tells us that we are located near a period 13 bulb. Counting counter-clockwise from the main spike, the arms get smaller until we get to the $7^{\text{th}}$ arm, indicating we could look at the $6/13$ or $7/13$ bulb, which I'll describe in a moment. Also, the first prominent spiral (which isn't really spiraling much) has four arms; this will be useful when we try to figure out which of the smaller components off of the period bulb we should examine.

The main cardioid of the Mandelbrot set can be parametrized via $$c(t) = \frac{1}{2} e^{2 i \pi t}-\frac{1}{4}e^{4 i \pi t}.$$ There is a bulb attached to this cardioid at each rational number $t$. The denominator of that rational number tells you the period associated with the bulb, i.e. every parameter $c$ chosen from the part of that bulb directly connected to the main cardioid yields a function $f_c(z)=z^2+c$ with the property that the critical point zero is attracted to an orbit whose period is that denominator. This also happens to be the number of arms that spiral in near here.

The numerator of the fraction $t$ tells you how the points in the periodic orbit are stepped through. This is easiest to see with an example of the resulting Julia sets. 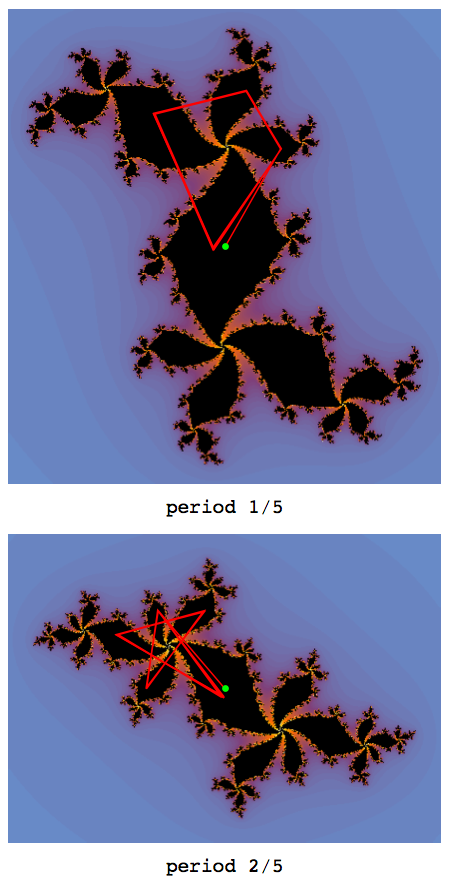 This also happens to mirror the changes in the sizes of the spiral arms of the Mandelbrot set.

This point is shown in red in the image below. The image also includes a sketch of the cardioid as determined by the parametrization $c(t)$. 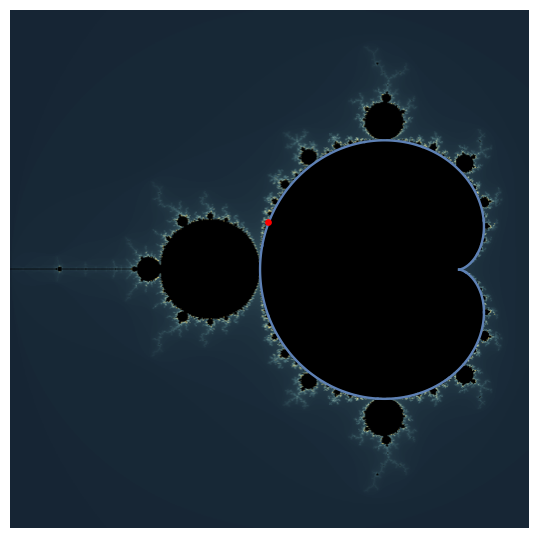 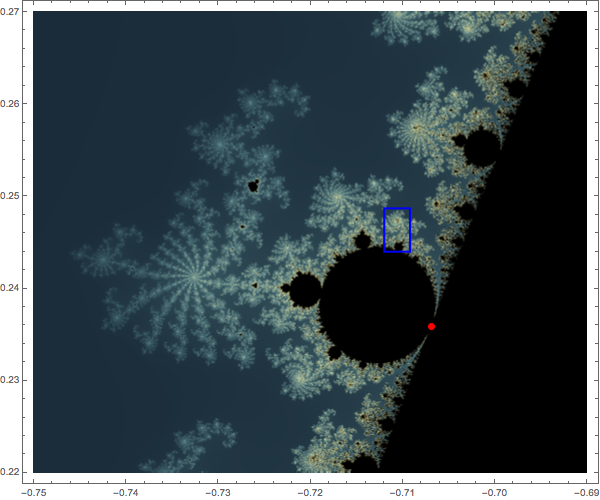 Now, at this scale, all of the smaller disks that we see attached to the main $6/13$ disk have similar spiral patterns. This is where we use the fact that the first prominent spiral has four arms. This leads us, finally, to the portion outlined in blue in that final image.

Not the answer you're looking for? Browse other questions tagged algorithms fractals complex-dynamics or ask your own question.

3
Looking for fractals which are computationally demanding and preferrably parallelizable.
2
Are fractal image generators one-way functions?

0
Create a new image from an image set's patterns
7
How to compute a negative “Multibrot” set?
0
Using Backtracking Algorithm to determine all the subsets of integers
41
Why does the Mandelbrot set appear when I use Newton's method to find the inverse of $\tan(z)$?
1
Coloring the Mandelbrot set using iterated points
1
Mandelbrot set perturbation theory: When do I use it?
2
Algorithm for rendering non-filled Julia sets?
2
Ultimate Mandelbrot Fractal Zooming