I think there's more to it than this, though. Specifically, the identity $$\int_a^b f(g(x)) g'(x) \, dx = \int_{g(a)}^{g(b)} f(u) \, du$$ is a relationship between definite integrals which could have applications other than symbolic evaluation of the integral on the left. In this case, the change of the bounds of integration is important in its own right. Thus my question:

What are some important applications of change of variables in definite integration, other than symbolic evaluation?

I have at least one answer but would be happy to hear more, particularly those that are easily understandable by Calc II students, as I think it's an important pedagogical question.

What are some important applications of change of variables in definite integration, other than symbolic evaluation?

Here are a handful:

The geometric interpretation is simply that the area of a region is preserved by reflection about its midsection. 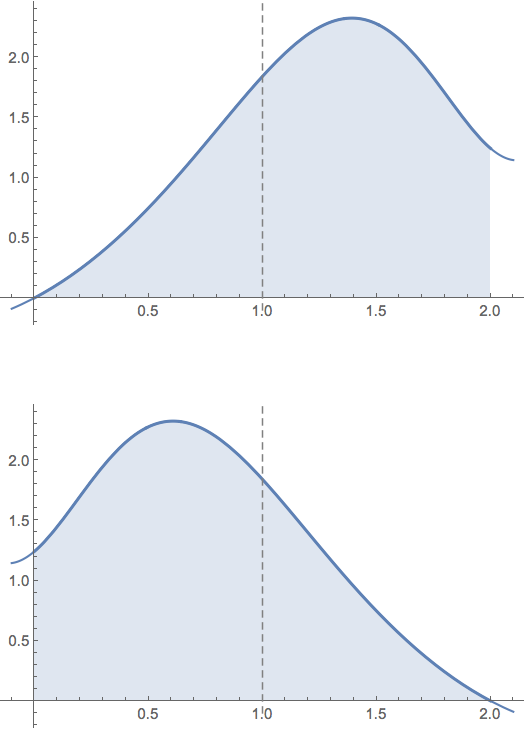 I will give my opinion as a student who recently "finished" Calculus, i.e. from Calc. I to Real Analysis.

First of all, I'd point out that the "symbolic evaluation" is probably the most important part of it. The identity that you've written was, for me, the only way I could actually accept the otherwise cryptic statement, presented to us as a "rule" for indefinite integrals: $$\mathrm du = u'(x)\mathrm dx$$ How was I supposed to reason this? What is this mysterious $\mathrm d$? A function of functions, whose result ends up having another such $\mathrm d$? An infinitesimal? What's that?

"Intuition" was never a deal-sealer for me, and under no circumstances was I prepared to accept "multiplying by $\mathrm dx$" in the identity $\mathrm du/\mathrm dx = u'(x)$. I needed to know why. This was where the identity for definite integrals came in. Of course, knowledge of a formal proof, one can argue, doesn't necessarily constitute an understanding; the "why". However, what it does provide is a sort of tether, a security that one can start with the mathematics that they (for whatever reason) know and accept at that moment, and arrive if they wish at the conclusion. So, once I knew and understood the proof concerning areas under functions, the proof that $$\int_a^b f(g(x)) g'(x) \,\mathrm dx = \int_{g(a)}^{g(b)} f(u) \,\mathrm du$$

In summary, the rule for changing variables in definite integrals, and the proof of said rule with reasoning that was within my grasp at the time, served as psychological grounding when dealing with $\mathrm dx$ and the likes. Note that this could be extended to (a limited set of) other contexts, notably the "separation of variables" one realizes in certain differential equations. Without this I was supposed to believe, again, that I was actually multiplying by $\mathrm dx$!

I realize that you ask for applications other than symbolic evaluation, and though I've mentioned the separation of variables in ODEs, which I think is a good example, I'll try to think of some more and edit this post later.

Not the answer you're looking for? Browse other questions tagged calculus integration definite-integrals education or ask your own question.