King and knight moving on an infinite chess board

There are actually two separate problems:

How many squares can a king moving on an infinite chess board reach in N moves?

How many squares can a knight moving on an infinite chess board reach in N moves? 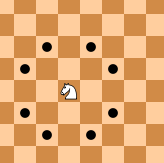 I solved the first one, but the second one seems much more difficult.

With the help of a computer (e.g. using Dijkstra's algorithm), try plotting the knight-reachable squares for, say, $N=10,11,12,13$. You should find that you get a solid octagon (whose diameter increases linearly with $N$), surrounded by a fuzzy fringe. But the width and pattern of the fuzzy fringe is the same for each $N$. If it were getting wider and more complex, the situation would be difficult to analyze, but here we have for each $N$:

In sum, for large $N$, the number of reachable squares ought to grow as a second-degree polynomial. Fit such a polynomial to the values for $N=10,11,12$ and verify that it works for $N=13$ too.

For $N$s that are too small to allow the central solid octagon to develop, you will probably have to override the quadratic with tabulated values. But once $N$ gets large enough, the quadratic growth will continue indefinitely.

This is just illustration for what @Henning Makholm described:

(if somebody is interested in the implementation of this simulation, the code is here)

It looks that closed form of number of squares on infinite chessboard reachable at <= n knight's moves from a fixed square is known as A018836, and is following:

Not the answer you're looking for? Browse other questions tagged combinatorics infinite-games or ask your own question.

5
Math and Logic of Infinite Chess
3
Chess Board and Knights
3
Knights on Multidimensional Torus Chessboard
1
Proving partial greedy property for minimal knight's path between two squares on unbounded chess board
9
minimum number of steps for knight in chess
4
Knight movement on chess field
5
Is it possible to start with a knight at some corner of a chess board and reach the opposite corner passing once through all the squares?
0
Minimum number of steps for a knight on chess board (5 x 5 or under)