Sine of a Complex Number

While I know that $\sin(x)=2$ has no real solution, I tried seeing if it has a complex solution.

I am not sure what I've done is all correct or even allowed (I realised I have taken the principle value for $\log(i)$ so my domain is already restricted) but that is not my main question.

I have a much better grounding with Euclidean Geometry than complex numbers and the Argand Plane so my first reaction was; what are the geometric implications of this, if it is correct?

Can complex angles simply be illustrated on an Argand Diagram?

What triangle would $\sin(x)=2$ relate to and how can the 'opposite' side be longer than the hypotenuse?

Does this mean that geometry on the complex plane is non-Euclidean and perhaps curved?

That last question is particularity troubling as I have been using complex numbers to solve Euclidean Geometry questions and have been treating shapes and angles in the Complex plane as I would treat them in the Real plane.

Edit: I'm afraid I may not have been too clear. My questions aren't concerning the technical aspect, although it is reassuring I've done the algebra correctly, but rather the geometrical implications of this result.

A geometric interpretation of this can be constructed, but it is not simple to “visualize”. You are right, however, in that it cannot be realized in Euclidean geometry and must be non-Euclidean: every Euclidean triangle has the opposite side shorter than the hypotenuse. Instead, we can realize it in a "complex-dimensional plane".

But we can proceed into the strange and fantastic world as follows. You are already familiar with the notion of 2-dimensional real space, $\mathbb{R}^2$. This is just the usual 2-dimensional plane, with an $x$- and $y$-axis. We next have to understand how distance and angle are defined. This is expressed most cleanly with the notion of an inner product of vectors, so you'll need to know some stuff about vectors to understand this.

by the Pythagorean theorem. Then the distance between the points is

which is the usual distance formula. The angle between two vectors u and v is given by

where $\mathbf{u} \cdot \mathbf{v}$ is the dot product, or inner product of the two vectors:

Note that the vector length and so distance are also expressible in terms of this: $||\mathbf{v}|| = \sqrt{\mathbf{v} \cdot \mathbf{v}}$. The inner product, geometrically, is the length of the projection of one vector onto the other, scaled by the length of the other vector. Thus the angle formula means: “form the right trangle by dropping a perpendicular from one vector to another, and then compute the cosine of the angle as adjacent/hypotenuse, then get the angle by passing to the inverse cosine”.

So with all that set up, we are now ready to move forward. We “upgrade” our plane $\mathbb{R}^2$ to $\mathbb{C}^2$, which is a “plane” where the coordinates are now complex numbers. Topologically, it has four real dimensions, not two, so we cannot easily visualize it. But we can get a “geometry” out of this. Instead of thinking of four real dimensions, we think of two complex dimensions. The $x$- and $y$-axes of our space are now complex planes, or complex lines, to really hammer in the analogy. We can have two vectors in $\mathbb{C}^2$ just as in $\mathbb{R}^2$, and we can define an “inner product” by

(note that, in complex conventions, since the coordinates are complex, we use $z$ and $w$ instead of $x$ and $y$.)

From this, we can recover a “distance” and “angle”, although they will now be complex numbers, instead of real numbers. One problem this creates is that distance, like angle, becomes ambiguous: it is possible, by moving the points around, to convert a “positive” distance into a “negative” one, and so the two-valued nature of square roots becomes central. As a result, we have to choose a distance convention, which will inevitably have a discontinuity; however, we need to remember that this discontinuity marks no discontinuity in the space, for it is perfectly continuous. It is nicer to instead work with distance-squared instead of distance, for this reason. (This use of distance-squared is not peculiar to this alone – in the geometric structure known as Minkowski space, it is better to do the same thing, for there distances can be negative, even though they're still real, unlike here, where they are complex!)

It is difficult to visualize these complex “distances”, especially in $\mathbb{C}^2$. To help, it would be useful to go to the one-complex-dimensional case, $\mathbb{C}^1$, which is just good ol' $\mathbb{C}$. The difference here is in how we are interpreting $\mathbb{C}$. We are, instead of considering it a 2D Euclidean space, considering it a 1D complex space. In this space, the complex distance of a point from the origin is $\sqrt{z^2}$, and to make things easier, we consider the squared distance, i.e. $z^2$. Just as in 1D real space, there are two points which stand at a given complex distance from the origin. We can map out regions on the plane which correspond to positive real, negative real, positive imaginary, negative imaginary, and complex squared distance. The following diagram illustrates these concepts, showing regions at different kinds of distances on a complex line, which is what we really need to be thinking of here. 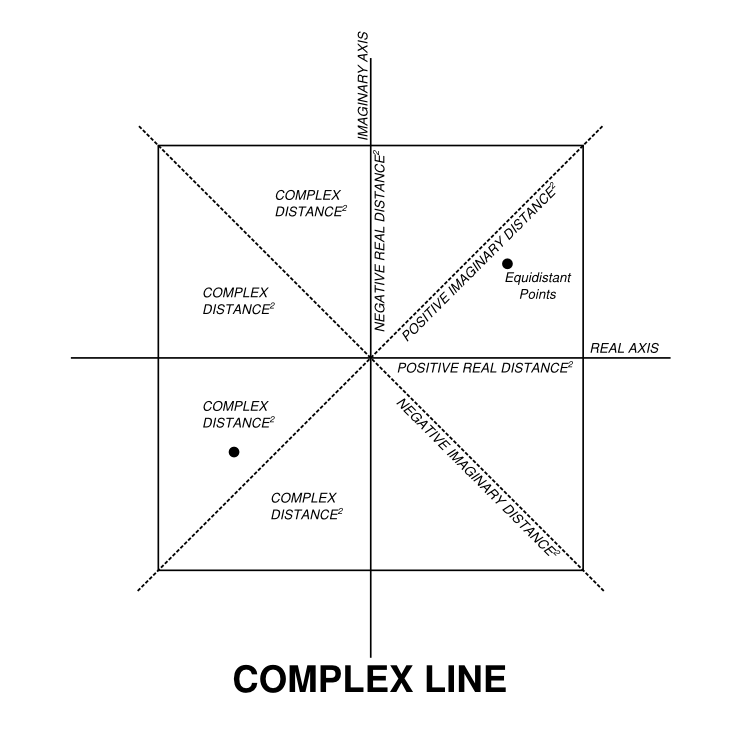 Now, going back to two dimensions. In two complex dimensions, lines are given by scalings of vectors just as they are in two real dimensions: the only difference is that they are scaled by complex numbers, thereby producing 2-real-D planes, which are what we have been calling complex lines. The usual 2D Euclidean rotation matrix

transforms $\mathbb{C}^2$ just fine, and it preserves the inner product even when rotating by arbitrary imaginary or even complex angles. Using this rotation matrix, we can create two vectors with the angle you desire between them. Take $\mathbf{u} = (1, 0)$. Then, using your angle, the other vector is $\mathbf{v} = (2, i \sqrt{3})$, since $\cos\left(\frac{\pi}{2} - i \log(2 + \sqrt{3})\right) = i \sqrt{3}$ and $\sin\left(\frac{\pi}{2} - i \log(2 + \sqrt{3})\right) = 2$. The complex angle between these two vectors in $\mathbb{C}^2$ is the desired angle. And so is the angle between the corresponding complex “lines” (i.e. 2D planes). And the weirdest part is: these “lines”, despite their topologically planar nature, will intersect at only one point! That's one of the weird things about 4-(real)-dimensional space. You can add a third “line” to make a triangle, and if you do it right, then you will have a “triangle” with the properties you desire, although because a point does not cut off a plane, such “triangles” will have infinitely extensive “sides”, like a triangle drawn on the plane but with its sides produced to infinity. This can be seen by considering that since a complex line is described as $r\mathbf{v}$ for a vector $\mathbf{v}$, we have its points as $(rv_x, rv_y) = (z, w)$ for every complex $r$, and thus we see that they satisfy the equation

which, in general, is

In the case of real $w$ with $-1\le w\le 1$, elementary goniometry already produces two sets of solutions, which have zero imaginary part. So saying $\rho=1$ is equivalent to saying that $w$ is real and $-1\le w\le1$.

Note that, by definition, $\sin z$ is periodic with period $2\pi$. This shows also that such a period is essentially unique (or we'd find other sets of solutions). The theory of analytic functions explains that an entire function can have at most one period (up to integral multipliers).

You can check your answer:

The geometrical relation where the sine is the opposite side of a right triangle is valid for real angles. It seems hard to envision a triangle with a complex angle, as well.

Not the answer you're looking for? Browse other questions tagged complex-numbers complex-geometry or ask your own question.

11
Are complex determinants for matrices possible and if so, how can they be interpreted?
12
What are the uses of split-complex numbers?
0
Show that the equation of a line can be given as ℑm(αz+β)=0
0
Geometrical Application of Complex Numbers
1
Solving Simultaneous Equations with Complex Numbers
0
a function defined on the complex numbers
0
Complex plane conundrum
2
The logarithmic form of $\text{arcsin}(x)$ and its implications