It was over 20 years since I studied maths and I am stuck. I'd really appreciate some help understanding this (probably quite simple) problem.

I have $n$ items that I can place on $m$ positions. $m$ ≥ $n$. The total number of combinations is the old and trusty ${m \choose n}$, but I also need to partition the combinations on k - the number of items directly adjacent to each other

What I am looking for is best shown with a couple of examples.

Five positions and one item can be combined in five ways when $k$ is one. 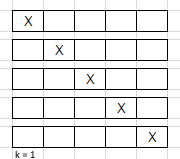 What I am trying to find is a function $f(m, n, k)$ that give me the number of combinations for some value $k$. For example:

Of course, adding up the number of combinations for all valid $k$ is ${m \choose n}$.

(Basically, $z$ tags the total number of blocks, so the g.f. is exponential in $z$, and $x$ tags the lengths of the blocks. The $m$ turns into $m+1$ because of the extra empty cell we added.) Bringing things full circle, this says

There is no simple formula, but you can use a simple recursive property to efficiently compute $f$.

Then, any valid (m,n,k) configurations either :

Using that, you can very efficiently compute $f$ with some dynamic programming. An example in python :

Not the answer you're looking for? Browse other questions tagged combinatorics binomial-coefficients combinations or ask your own question.

0
Ways of spending money combinatorial problem
3
Number of ways to arrange items
3
Number of ways to arrange 3 boys and 5 girls in line if the boys must stand next to each other?
0
Number of ways to choose 3 items out of 8 if 2 items can not both be choosen
0
How many ways can you arrange $n$ indistinguishable objects in $k$ distinguishable positions? (with $n\le k$)
0
All combinations and number of permutions of each combination with three kinds of items
3
Permutations- Restriction on two items placed next to each other.
2
what is the number of ways to split k distinct items into n distinct bins with no bin with exactly one item?
1
Number of ways of selecting N items with K types where each type must have $n_i$ items where $\sum_i n_i = N$
2
How many ways can you choose 12 items from 8 items types if you choose at least one of each type?