I am trying to calculate the degrees of the attaching map of the two cell of the torus. I have the following cell structure: 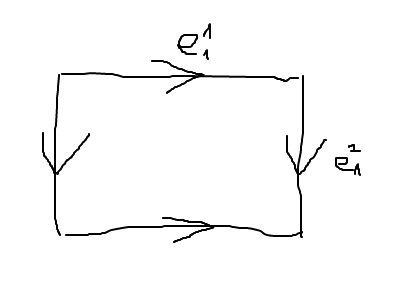 when I should be getting

What am I doing wrong? How can I calculate the degrees of this attaching map?

EDIT: I tried to improve my answer by first clarifying your method, and giving more details on a second method. I hope this helps!

First of all, it is commonplace to use the superscripts for dimension, so one might more typically label the 1-cells $e^1_1$ and $e^1_2$. (This is done in Hatcher, in particular.)

Method 1: Your issue amounts to misinterpreting the attaching maps.

Perhaps the key point of confusion is that while the boundary map does amount to two maps $S^1 \to S^1$, the maps are NOT degree 1. After all, maps $S^1 \to S^1$ could take any integer as the degree. In your case, $e^2$ is attached to each 1-cell TWICE, so the degrees could be either 1+1 or 1-1, depending on the orientation.

Method 2: If you prefer a slightly more rigorous method than using pictures, note that for the purposes of homology it is sufficient to describe a map up to homotopy. So, we can describe the map by the induced behavior on fundamental groups.

We have $\partial e^2 = S^1$. The fundamental group of the circle is generated by the (homotopy class of the) loop $ \phi : [0,1] \to S^1, t \mapsto e^{2\pi i t}$. In this example, $X^{(1)}$ is a wedge of two circles, with fundamental group isomorphic to the free group generated by $\alpha,\beta$, which represent the homotopy classes of loops around each of the circle factors.

Not the answer you're looking for? Browse other questions tagged algebraic-topology cw-complexes or ask your own question.