A man who lies a fourth of the time throws a die and says it is a six. What is the probability it is actually a six?

First, I apologise for the vague title. I couldn't think of a short way to represent the problem. Also, I am aware that a similar question exists, but I have a little bit more insight.

A man is known to speak the truth three out of four times. He throws a die and reports that it is a six. Find the probability that it actually is a six.

The answer in the book is $ \frac{3}{8} $, which sounds completely off to me, given the numbers, on first glance. I decided to try it on my own. After some contemplation, it indeed is true that $ \frac{3}{8} $ is correct. But, the question's vagueness makes it interesting. It's sort of a naive answer!

Here's the first of my two solutions: 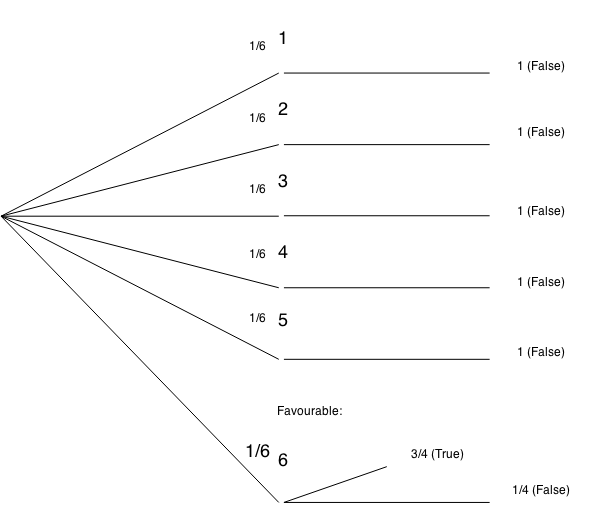 Please note that I don't care about the sixes rolled when he lies about it being a six, because that condition is not applicable to the question.

I'm very skeptical about my calculations! I decided to whip up a simple program and see what the probability distribution is for $$ \frac{Number~of~sixes~rolled~while ~saying~it's~a~six}{Number~of~dice~rolls} $$

Considering the book says $ P(E~|S_2) = \frac{1}{4} $, which is in essence is contradictory to the question, let's also consider the other possibility: 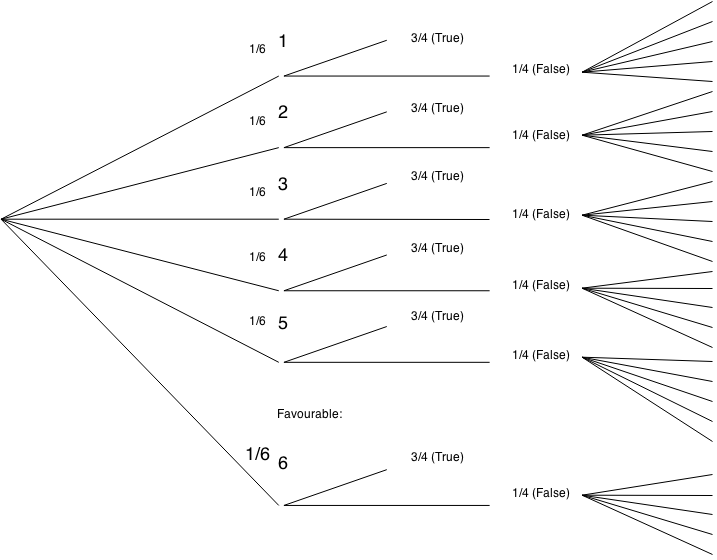 It's even more vague in this scenario! If the man lies after any given roll, there is a $ \frac{1}{5} $ probability that he will lie about it being any other number. This creates a new branch at each lie, which splits into five. In this case,

This seems like the more intuitive answer, and it is why I doubted the original answer in the first place. Given a truth probability of $ \frac{3}{4} $, there was no way that the probability of a six was $ 37.5\% $!

The ambiguity of the question is what makes $ \frac{3}{8} $ wrong to me. Entirely out of curiosity, which answer fits best with the question and are these calculations correct or baloney?

There are essentially three aspects of the question that I would consider vague:

Item 3 is the real sticking point, since without making the assumptions of Items 1 and 2, no computation can be performed at all. But Item 3 requires us to interpret the meaning of "lie," and more problematically, a fully reasonable computation is possible under a variety of interpretations. To see why, let's make the process a bit more concrete:

Now consider two plausible interpretations of what happens if the man lies:

Indeed, there are any number of possible interpretations, because ultimately what influences the desired conditional probability is the probability that the man will choose to report a six given that he has decided to lie after not actually rolling a six, and this is not specified in the question. Both options already described yield reasonable interpretations, but we could also recognize them as special cases of the general probability $$\Pr[X = 1 \mid Y = 1] = \frac{3}{3+5p},$$ where $p = \Pr[Y = 1 \mid (X = 0 \cap L = 1)]$. Option A sets $p = 1/5$ (choose uniformly among the other options), and Option B sets $p = 1$ (always choose to report 6).

Consequently, I would regard this question as having insufficient information to formulate a conclusive answer.

There are two situations in which the man can report a 6, either he is telling the truth or he is lying. The key assumption that seems to be made here is that the man's veracity is independant of the value on the die. Namely, he is just as likely to lie if the die shows a six as if it shows a three.

That being said, as you posted above, this is an example of Bayes Theorem. Let me change your nomenclature a bit.

Let $T$ be the probability of the man telling the truth, regardless of situation $=\frac{3}{4}$

Let $\bar{T}$ be the probability of the man not telling the truth, regardless of situation $=\frac{1}{4}$

5
Probably that an $80\%$-truthful person actually rolled a $6$
3
Intuitively understanding the purpose of Bayes' theorem for a $3/4$-probability truth-teller
8
A man is known to speak truth 3 out of 4 times. He throws a die and reports that it is a six. Find the probability that it is actually a six.
2
Probability related to truth and false
1
How to compute this conditional probability using the probability tree?