How do I prove that there infinitely many rows of Pascal's triangle with only odd numbers?

This is exercise number $59$ from Chapter $2$ of Hugh Gordon's Discrete Probability.

Show that there are infinitely many rows of Pascal's Triangle that consist entirely of odd numbers.

In particular, if we number the rows starting with the top as $1$, the rows will all odd numbers will be exactly the rows with number $2^n$ for some $n \in \mathbb{N}$ (or $n=0$ for the first). You can see this if you think about the Sierpinsky triangle coloring.

This can probably be done by induction but a direct proof would be preferable.

illustration purposes; certainly seems rows $2^k - 1$ are a good bet. I would revise the problem and point out that all even, except the initial and final $1,$ seems to be rows $2^k$ only.

I drew this initially for finding the total number of gifts in "The Twelve Days of Christmas" song. I remember telling my father about that twenty or thirty years ago, and him complaining "Why is it binomial (14,3)? It's 12 days, how does 14 make sense?" Much later, I got some graph paper (quadrille) and made the most legible version i could and made a jpeg. I like, especially, how row 14 has consecutive coefficients 1001,2002,3003. Good reason for this, relying on $7 \cdot 11 \cdot 13 = 1001.$ 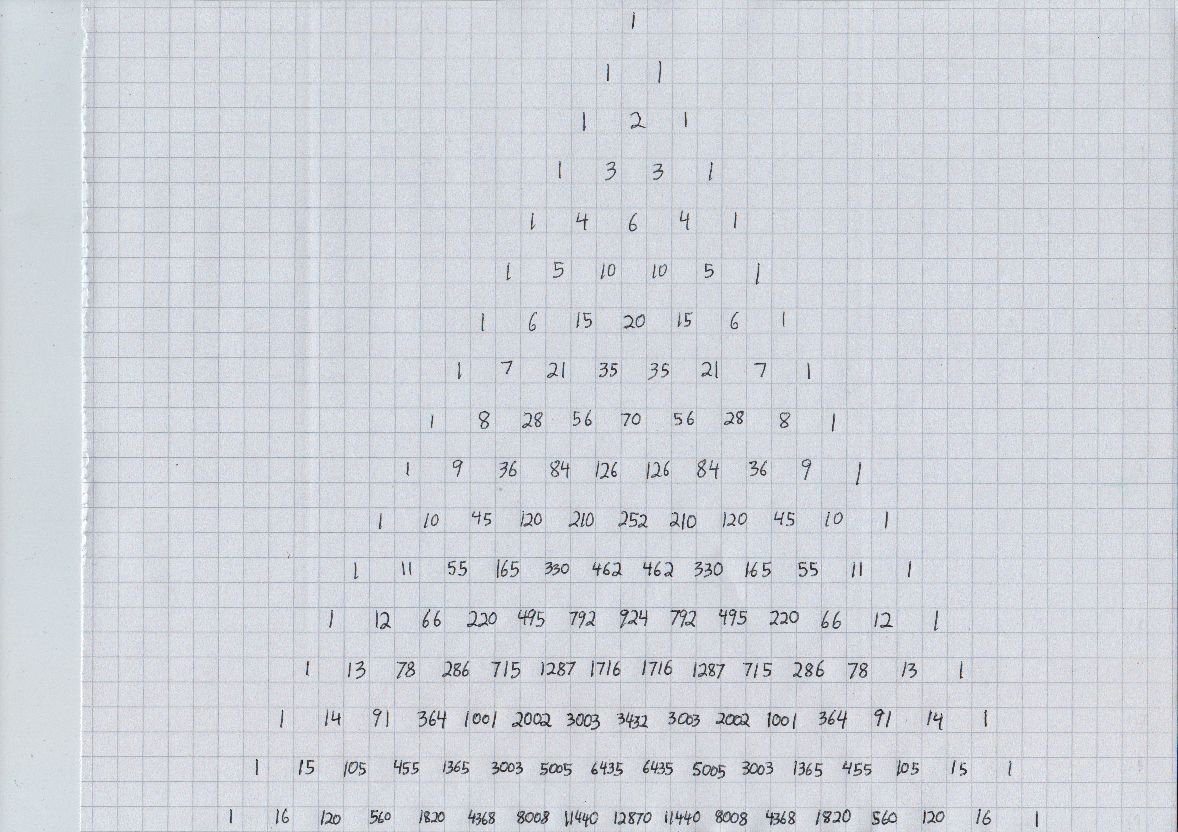 this property follows from the fact that if $m+n=2^k-1$ there are no "carries" in the addition.

For the record, it can indeed be done by induction, and quite easily at that. Recall the generalization of Pascal’s identity, itself easily proved by induction on $m$:

How about a nice combinatorial proof after all that algebra? (It is still by induction, though -- sorry.)

Most of these strings can be paired with a different string of the same kind by reading it backwards. The ones that can't are the palindromes.

How many palindromes are there? We can choose a palindrome by taking one of the $\binom{2^{n-1}-1}{\lfloor k/2\rfloor}$ possible first almost-halves, followed by either a or b according to whether $k$ is odd or even, followed by the reverse of the first half.

Not the answer you're looking for? Browse other questions tagged combinatorics modular-arithmetic binomial-coefficients or ask your own question.