Why is there more room in a square room than there is in a rectangular room when the perimeter is the same in both rooms?

I can take that rectangle, cut the length off, add it to the width, and get the same area as the square.

While I wait to properly understand the question, here are some more "ridiculous algebraic formulas". Suppose the size of the square is $a$. Then the dimensions of the rectangle must be $a+b$ and $a-b$ for some $b$. Its area is $(a+b)\times(a-b)=a^2-b^2$, which is less than the area of the square, $a^2$.

From the later comments:

Mathematics is a man made concept. Everything has a reason for being the way it is. . . There was a reason the inventors of mathematics created it the way they did. . . A human created the formula to determine the area and the perimeter, etc of something.

I see! You're asking the question "Why does the square have larger area than the rectangle?" in the sense of something like "Why is the speed limit only 20 miles per hour in this podunk town?" Someone was responsible for that speed limit. They could have chosen otherwise, but they chose this. Why?

But here I don't think people had that much choice in the matter. Area is just a name for the number of little squares that can fit inside a given shape. Perimeter is a name for the number of little line segments that can go along the boundary of the shape. Those would still be there even if we hadn't given those concepts a name, just as a lemon would have a colour and a taste even if we didn't have words for yellow and sour. I mean, you can draw a $4\times2$ rectangle and a $3\times3$ square on a piece of graph paper and count the number of little squares and the number of little lengths on the boundary by hand without using any formulas. Go ahead, try it right now! What part of that feels invented, or man-made, or arbitrary? Did someone else choose those numbers, when you counted them yourself?

It's kind of implicit in your original framing of the question, too, isn't it? You've built a $14\times12$ foot room and a $13\times13$ foot room, and you find that the $13\times13$ room has more space in it. And you want to know why someone defined the formulas so that it works out this way. The idea that some mathematicians in antiquity are responsible, that if only they had defined area and perimeter differently it would somehow change the amount of stuff you can fit into your rooms, well, it doesn't make any sense to me.

If I may rephrase the problem, what is the maximum area $A$ of a rectangle of given perimeter $P$ ?

The perimeter and the area of a shape have little or no relation to one another.

Cut yourself a length of string and tie it together to make a loop. You can lay this out on the ground so that it surrounds many different sized areas.

There will be a maximum possible area. This is a famous problem known as the Isoperimetric Problem. It turns out that the maximum enclosed area is given by making a circle.

But what about the smallest possible enclosed area? Well, if you use "mathematical string", i.e. a one dimensional object with no thickness and with perfect "bendability", then you can \contrive a shape that encloses an area as small as you like. Think about a long, thin rectangle. If you want the enclosed area to be less then make the rectangle longer and thinner.

This shows that, in the case of the rectangle, the maximum enclosed area is given by making by $t-\tfrac{1}{4}p=0$, i.e. by making the thickness one quarter of the perimeter. This means we have made a square. In such a case, the maximum area is $\tfrac{1}{16}p^2$.

I'll try to give an intuitive answer. For the rigorous mathematical argument you have Claude's answer.

Let's imagine we build our rectangles and squares from small $1\times 1$ blocks.

Now, to build a square with area $4$, you put $2$ small squares on top of another two small squares. All of these will have $2$ sides that contribute to the perimeter.

This same argument can be increased to any size square/rectangle. Any rectangle will always have more of these blocks exposed to the outside than a square of the same area.

This proves that a rectangle will always have a larger perimeter than a square with the same area. This implies that if a rectangle and a square have the same perimeter, the rectangle must have a smaller area.

My attempt at making it as simple as possible:

Suppose you have a rectangle that isn't a square. Then it's longer in one dimension than the other.

Now take a little bit (say 1 inch) off of the long sides and add it to the short sides.

Since you added 1 inch to two sides, and removed 1 inch from two sides, the perimeter stays the same.

Therefore you can always increase a rectangle's area, without changing its perimeter, by transferring length from the long sides to the short sides (as long as the amount of length that you transfer isn't more than half the difference between them).

The only time this isn't possible is when all of the sides are the same length — that is, when the rectangle is a square. Therefore, a square maximizes area for a given perimeter.

and the rectangle is in fact a square. you now prove that in the above we really get a maximum point.

Another more basic way with the same notation:

and thus its vertex is a maximal point. But the vertex is given by

This is both in response to the comments made in Rahul's answer, and also as an additional graphical proof.

In addition, let me emphasize that to mathematicians, "Why" something is true is explained in mathematical proof. Explaining things via formula and pictures and such is not a "How" but is indeed a "Why". Also let me emphasize that when beginning anything it is important to remember the definitions. Area of a shape is loosely defined as "how many unit squares can fit in a shape", and for rectangles in particular it is explicitly defined as $A\times B$ where $A$ and $B$ are the lengths of the sides.

Without loss of generality let the rectangle we are comparing to be longer than it is tall. Having started with a square of side length $B$, choose some positive value of $x\leq B$ and relabel the side length as $B=A+x$ where $A = B-x$ 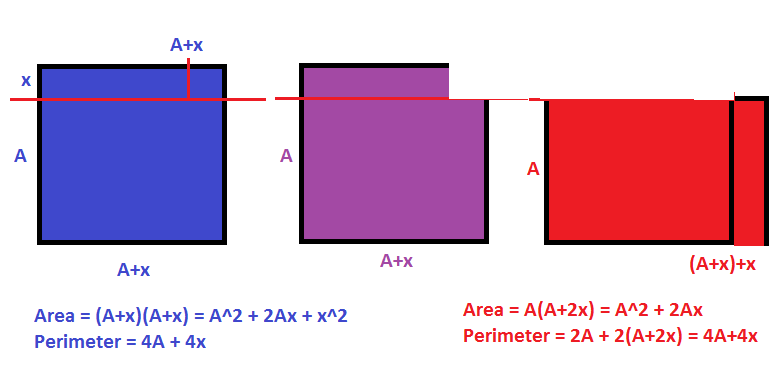 By changing the value of $x$, you are able to form any rectangle of given perimeter, and if $x=B$ then you get a line segment which has zero area. $\square$

Now remove another square, adjacent to the one that you first removed (let's say top almost-left). You now have a 13x13 square from which you removed a 2x1 rectangle. The perimeter is still the same, but the area has been diminished by two.

Keep removing 1x1 squares along the same edge (top edge), until there is only one 1x1 square left on that edge. You now have a 13x13 square from which you removed a 12x1 rectangle, without changing its perimeter. You can also think of it as a 13x12 rectangle with a single 1x1 square hanging off one corner (at the top of the top right corner).

Now take that one extra 1x1 square and move it from the edge it's on (top edge) to its adjacent edge (right edge), so that now you have a 13x12 rectangle with a single 1x1 square hanging off the same corner, but in the other direction (at the right of the top right corner). You can also think of it as a 14x12 rectangle with a 11x1 rectangle missing. In this step, you once again did not change the perimeter, and you also did not change the area.

Now, starting from the 1x1 square that's hanging off the corner, add one missing 1x1 square back next to it (just below it). You now have a 14x12 rectangle with a 10x1 square missing. In this step, you did not change the perimeter, but you increased the area by 1.

Keep adding 1x1 squares back until you have a full 14x12 rectangle. Every time you add a 1x1 square back, you are increasing the area by 1, without changing perimeter.

Now look at what you did over all: you removed 13-1=12 squares off the top, but you added 12-1=11 squares on the right. Therefore, the area decreased overall from start to finish.

If you think about how this process works, you will see that if you start with a square, you will always end up removing more 1x1 squares from the top than you add on the right, and therefore the area will always decrease overall. (Try it for a few different size squares to see why.)

Robert, to keep it simple think of perimeter as 'Exposed Surface'. Perhaps a visual illustration of 'why' will be of more use to you than an algebraic one? 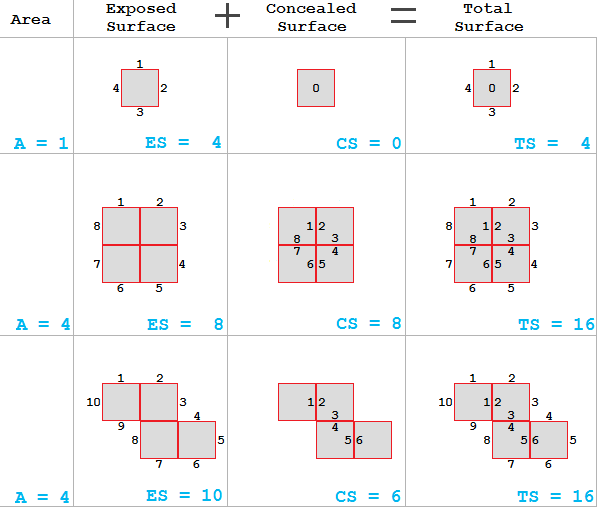 Then with that in mind, this: 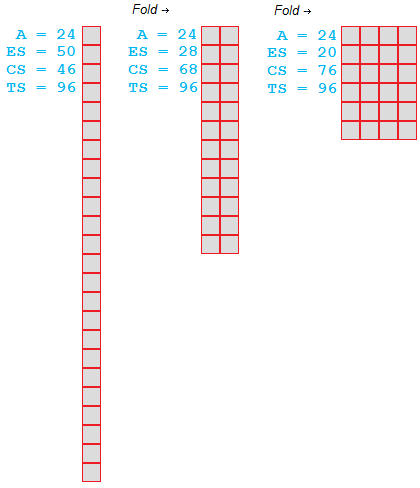 Notice how 'Area' and 'Total Surface' stay constant throughout the shape change (folding) process. Modifying the shape of an object directly influences the ratio of 'Exposed' & 'Concealed' surfaces (measured in terms of discrete units). Therfore the 'perimiter' of an object can be modified significantly without the need to change its area.

As for the units used, they don't really matter, we could be referring to (m), (cm), (mm), etc. down to atomic distances if you like: 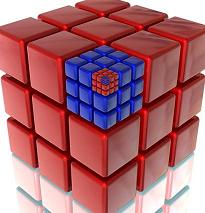 Either way the concept is the same; you break the object down to discrete units, and from there you can analyse the relationship between shape, area, and perimeter.

Constant perimeter does not imply constant area, because the later depends on $A+B$ while the former depends on $AB$. And recaling the AM-GM inequality:

The equality happens when (and only when) $A=B$

The following proves that a square always has a greater area than a non-square rectangle of the same perimeter.

There are many ways to prove this. I have designed this particular proof so that almost anyone, even without much mathematical experience, can understand it.

28
Why does a circle enclose the largest area?
6
Solving min-max optimization problems in original ways (that is, avoiding the frenzy of differentiation)

1
Muddled Notions Regarding the Measurement of Quantities in Different Dimensions
2
Square of One more than the Larger Part
0
Perimeter/footprint and square meters
0
Which shapes could have the largest and lowest possible area?
6
Surface optimization for a volume
3
Why is the catenoid the minimal surface of revolution?
1
Moment of inertia of a square (single integral)
2
Why is the area of a rectangle the height multiplied by the width?