Can Point inside quad be determined with angles alone?

Is it possible by calculating the angles between points to determine whether a point is inside (including on), or outside the quad

Off the top of my head it looks like

Is this a valid way to test whether a point lies inside a quad? I can't seem to come up (in my head) with a situation in which the angles from point A would total $360 ^{\circ}$ as well 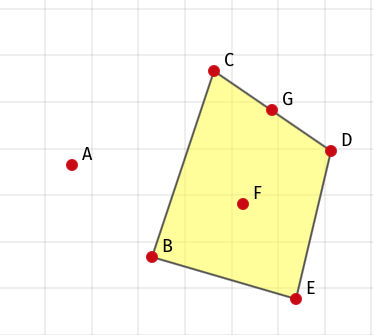 I'm hoping to use this information to turn this into a little software routine in python (which it now occurs to me might be subject to rounding errors...)

Don't know if you can do it just with angles (e.g. what if the quadrilateral has a reflex angle in it?) But any quadrilateral can be split into two triangles (e.g. BCD and BDE for your notation). Then your problem reduces to determining if a point is an interior or boundary point of either of the triangles.

How to determine some points are inside or outside in triangle

1
Proof for solar declination angle?
3
Does the sum of exterior angles of a simple, convex polygon truly = 360°?
1
I need some help with Geometry. Is this a correct answer to this problem?
3
Is there anything special about intersection points of vesica pisces circles on a triangle?
0
How to properly relate the time elapsed and the angles in a problem involving an analog watch?
3
Angles inside a triangle
1
Triangles : isoceles and angles inside with other triangle
2
Can an angle between the subdividing segments and the edges of a triangle be determined only by interior angles and the intersection of the segments?