Understanding the Definition of the Tensor Product of Chain Complexes

I understand this definition works by yielding a chain complex (with a nilpotent boundary operator as usually defined), but I don't understand anything about it beyond that.

Added: Does the tensor product of chain complexes as defined above posses some universal property (which is easy to formulate) in $\mathsf {Ch}_\bullet$?

For topological / geometric insights I refer to the text "Rational Homotopy Theory" by Felix, Halperin and Thomas. For formal definitions and applications in homological algebra the book by Gelfand and Manin is recommended, instead.

$\{Ci\otimes Dj\}$ is nice double complex，with left hand side is $n$-th object in total complex of the double complex. you can refer to balancing ext and tor in Weibel's book. it has a nice application to prove two left derived functor of $A\otimes B$ gives same functor.

Ok I have never seen definition of tensor product of chain complexes before but it seams to me quite sensible. I did a very crude drawing which might give you some motivation behind the definition (If I got it right :D)

In the picture we have two chain complexes $C_\bullet,D_\bullet$, in fact they are simplicial complexes of dimension $1$. They are both just an edge with two end vertices. Now you would like to somehow combine them and get square and that is the tensor product. Or you could take two circles and get torus or circle and edge and get cylinder.

I did not label every element of $C_\bullet \otimes D_\bullet$ I just labeled vertex $a\otimes d$, edge $e\otimes c$ and face $e\otimes f$. 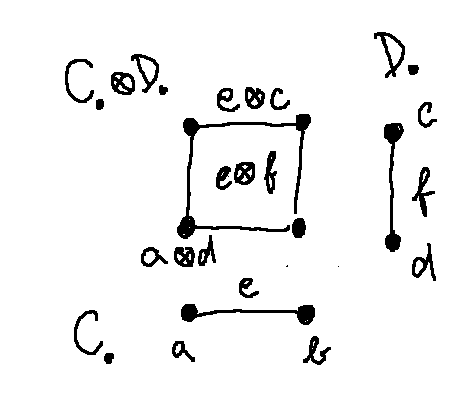