Game to maintain distinct number of balls in glasses

There are $n$ glasses, containing $n+1,n+2,\ldots,2n$ balls, respectively. Two players $A$ and $B$ play a game, alternately taking turns with $A$ going first. In each move, the player must choose some balls (perhaps all, but not empty) from one glass, so that the number of balls remain pairwise distinct. The player who cannot move loses. Who can win?

To see why this works let's work thru an example where $n=6$. The initial setup is

This ensures that $A$ always has a valid move after $B$, so player $A$ makes the last move and thus wins.

This is Welter's Game with special starting positions. In chapter 13 of On Numbers and Games, John Horton Conway presents an amazing analysis based on "animating functions." It appears to be his own take on an earlier solution presented by Welter (but without attribution).

Although there is not enough space to give a full account of this game, I will sketch the theory, indicate how the calculations can be carried out, provide an original algorithm to compute the values of this game's starting positions, and display the winning moves. References (at the end) will fill in the details. Some working code is appended for those who might like to explore further.

Why this is Welter's Game

Let there be glasses with $k_1, k_2, \ldots, k_n$ balls. Represent this configuration by putting $n$ coins on a horizontal strip of squares, numbered $0, 1, \ldots$ from left to right, with a coin placed on square $k_i$ representing the contents of glass $i$. The rules of the glasses game, translated to this setting, are

That's Welter's Game. For example, glasses with $1,3,6,10$ balls correspond to this coin configuration:

The algebra of Welter's Game

As in all Nim-like games, this one is fully determined by its Grundy value (aka "Nim value" or "nimber"), which is an element of the set $\{0,1,2,\ldots\}$. The natural addition of Grundy values (Nim addition, written ${+}_2$) reflects the addition (or "disjunctive compound") of games. If you turn off the ability of your binary computer to carry digits, it will perform Nim addition.

The Grundy value of the position with $k_1, \ldots, k_n$ balls is written $[k_1|k_2|\cdots|k_n]$. According to Conway, Welter found it by exploiting two relations:

By exploiting the second relation repeatedly you can simplify the game by Nim-adding $a$ to produce a $0$ and using the first relation to reduce the number of arguments. This quickly terminates and in the process will spit off the Nim-sum of a bunch of $x$'s (at every other step), which yields the Grundy value of the position.

Conway develops an algebra of "animating functions," which share many properties of Complex rational functions. With it he shows that the Grundy value of a Welter position is an animating function, providing the basis for many simplifying algebraic identities. For details see Conway; for a brief introduction, refer to Guy (references at the end).

The Grundy values of the starting positions

As a function of $n$, they limit to a beautiful fractal: 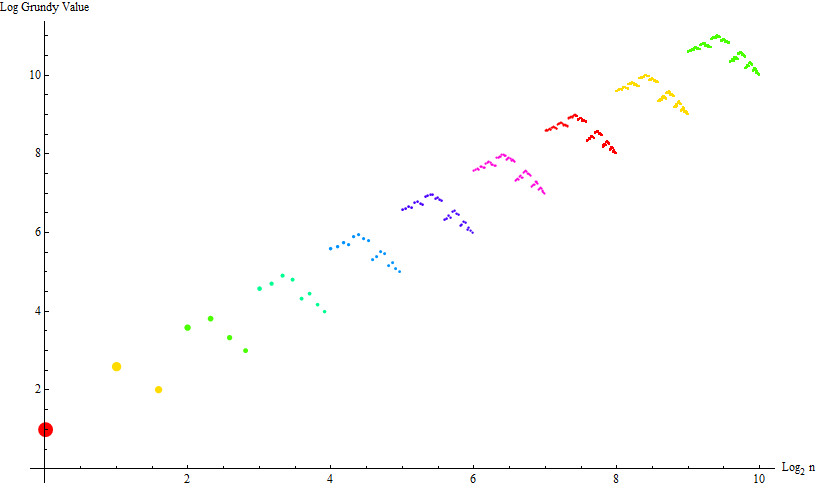 The points are colored according to the lengths of their binary representations. Each time the length is increased, patterns from the previous two lengths are copied to the right and up.

These can be proven recursively using Conway's animating function algebra. The values of $w(n)$ start out, beginning at $n=1$, as

It is immediate that the Grundy values of all starting positions are nonzero. This means the game is a win for the first player, whose best moves are to positions with zero values.

The Grundy values of some special positions

For those who might wish to explore further, here is some Mathematica code implementing the basic operations (Nim-addition and Conway's mating function) and computing the value of any position in Welter's game (using Conway's algorithm as a Nim-sum of "mated pairs").

John Conway presents the algebra of animating functions in On Numbers and Games (2nd Ed., A K Peters, Ltd, 2001).

Not the answer you're looking for? Browse other questions tagged combinatorics game-theory combinatorial-game-theory or ask your own question.

13
Who has a winning strategy in the hamilton-circle-game?
2
Alice and Bob number sum game
0
stacks with odd number of cards
10
What is the winning strategy for this Game on the Power Set
4
Palindromic String Game
8
Tower game strategy
2
The game of taking an even number of stones