What I need is to generate an SVG file while having a series of (x,y) ready.

I need to make a Bézier curve from them so I need to calculate control points (mid-points) for them. This image explains what I am exactly looking for: 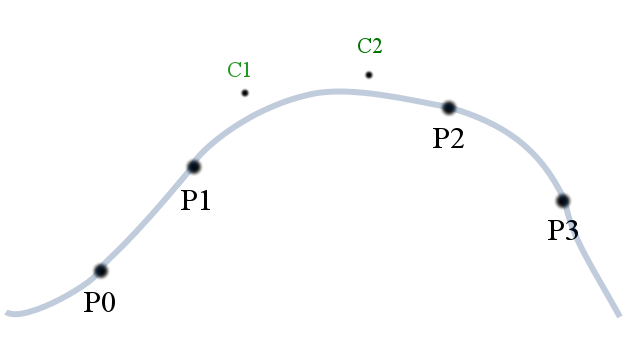 I have points P0, P1, P2 and P3 ready. What I need is to calculate control points C1 and C2. The curve does not pass them. But it bends toward them.

I need a formula which gives me C1 and C2 in clear direct form:

I was thinking about least square method and some other methods but I had no idea how to implement them.

You may say "But it's obvious that the control points in this case should be on the $x$-axis!" and I say "but your problem statement doesn't require it." Indeed, I chose this example because it was easy to write, but given any set of $P_i$, I can again find an infinitely family of ways to place the intermediate control points so as to join the $P_i$ with Bezier segments.

I'm going to suggest that you consider looking at Catmull-Rom splines, which are piecewise cubics passing through a sequence of points like your $P_i$. Each segment of a CR-spline can be expressed as a Bezier curve, because the Bezier basis functions span the space of cubic curves. One detailed reference on this is Computer Graphics: Principles and Practice, 3rd edition, of which I am a coauthor, but there are plenty of other references as well.

Not the answer you're looking for? Browse other questions tagged graphing-functions algebraic-curves interpolation bezier-curve least-squares or ask your own question.