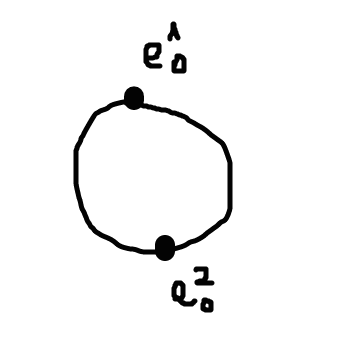 Here the degree is described as " the degree of a continuous mapping between two compact oriented manifolds of the same dimension is a number that represents the number of times that the domain manifold wraps around the range manifold under the mapping."

I understand that. If I apply it to the $2$-cell in my example then half of the $2$-cell wraps once around one of the $1$-cells while the other half wraps around the other $1$-cell.

Therefore we should have $\deg(f_1) = \deg(f_2) = {1\over 2}$. The problem is, in the definition the degree is an integer. How do I calculate the degree of this attaching map correctly?

Maybe my problem is that I don't know how to define the attaching map for this example so that it is one attaching map $S^1\to S^1$ rather than two maps. After all, the degree is define for one map $S^n \to S^n$. But I don't see how I can calculate the degree if I define it using one map.

With orientation as assumed in the answer by Ted Shifrin: 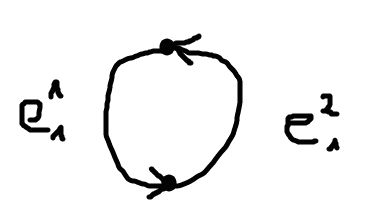 In this question I am asking about degrees of attaching maps $\chi_n$ as in the definition of cellular homology on Wikipedia. I am not asking about boundary maps.

6
Degree of a map $S^0 \to S^0$
4
Understanding cellular homology: degree of attaching map of a two cell
7
Finding the degrees of the attaching map of the $2$-cell of the torus
1
Attaching maps in a product cell complex
4
Homology of a space obtained from $S^n$ by attaching a cell $e^{n+1}$ by a map of degree $m$
0
Computing Homology with Attaching Maps
5
Degree of Map between Spheres
2
Attaching maps of products of CW-complexes.
0
Calculating cellular homology, how to relate degree of boundary map with hand waving arguement