In answering a question I mentioned the Asteroids video game as an example -- at one time, the canonical example -- of a locally flat geometry that is globally different from the Euclidean plane. It might be out of date in 2010. This raises its own question:

are there other real-life examples of geometries formed by identifications? We know the cylinder and Moebius strip and there are probably some interesting equivalents of those. Origami are coverings of a punctured torus and I heard that there are crocheted examples of complicated 2-d and 3-d objects. Are there simple, Asteroids-like conversational examples for flat surfaces formed as quotients? Punctures and orbifold points and higher dimensional examples all would be interesting, but I am looking less for mathematically sophisticated than conversationally relevant examples, such as a famous game or gadget that makes a cellphone function as a torus instead of a rectangle.

(edit: Pac-Man, board games such as Chutes and Ladders, or any game with magic portals that transport you between different locations, all illustrate identification of points or pieces of the space, but they lead to non-homogeneous geometries. The nice thing about Asteroids was that it was clearly the whole uniform geometry of the torus.

edit-2: the Flying Toasters screen-saver would have been an example of what I mean, except that video of it exists online and shows it to be a square window onto motion in the ordinary Euclidean plane.)

You could view a kaleidoscope as a picture of a pattern in the quotient of the plane by a suitable group action.

Similarly, some Escher work is a picture of life inside hyperbolic surfaces -- quotients of the hyperbolic plane. 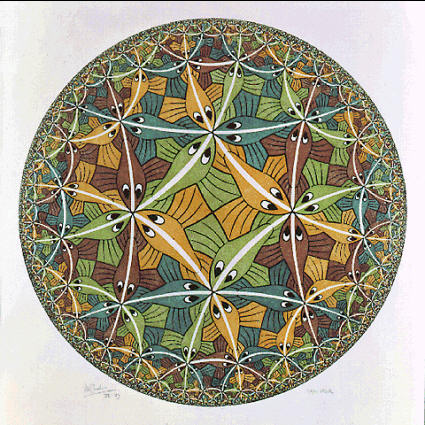 On the more extreme end, $\mathbb R^2$ is a quotient of $\mathbb R$, so presumably you have a stricter question in mind than the one you've actually written, as you can get all kinds of things as quotients. $SO_3$ (rotations in 3-space) are a quotient of the unit quaternions. This is used in computer graphics, among other things.

For the kaleidoscope, you're really viewing the quotient as an orbifold with its natural geometric structure, rather than just as a topological space.

Many role-playing games have toroidal worlds. Especially Dragon Quest and Final Fantasy games. It's a pity that few go through the trouble of implementing a true spheric topology. I don't mind other topologies if they fit the game world, but in RPGs it's mostly understood that the world should be Earth-like.

And then, there is also this marvelous site:

The original Sonic the Hedgehog games (on the Sega Genesis and similar consoles) provide good examples. Many of the levels wrap around vertically, so that there is no bottom or top. They are equivalent to cylinders, I suppose.

Here are some examples from Sonic 3:

The designers used this to make the giant hill at the beginning of the ice cap level that is many times taller than the level itself. Also, the Sonic 3 Special stages are toroidal, just like Asteroids, though in the game they are presented with an apparent spherical curvature, which had me terribly lost and confused until I googled it. In hindsight, I should have realized that you can't cover a sphere with squares, but Sonic doesn't exactly give you a lot of time for thinking.

In (some of) the Civilization games you can decide whether you want to play on a (bounded) plane, or a cylinder, or even a torus, I think.

A running track is a good one-dimensional example. We start with the real line and identify all points {x + n*400meter}, or equivalently we take a 400meter long line segment and glue the ends together. Now, we can sit in the stands and watch an entire 800m, 1600m, or 3200m race, because we have a nice "compact" track!

Once you explain how tiling the real line with 400m segments leads to a running track, it may be easier to explain how two-dimensional tilings of the plane (or sphere or hyperbolic plane) can lead to quotient spaces. Of course, we need to know how to glue the edges, and that point may be a little vague in a casual conversation-- but if Asteroids is not available, I think that tilings are one of the best ways to visualize quotient spaces.

Take a look at this version of Asteroids that runs in other quotient spaces besides the flat torus:

This short paper describes the approach:

In Portal, the sets that are glued together can be looked through and jumped through seamlessly. Since the exit portal can be placed behind the entrance portal, one can even see the nested images of onesself standing between the portals. Is that what you mean by a homogenous geometry?

In Super Mario Galaxy, there are many different surfaces, but the quotient geometries have their seams hidden in some way if the transition region can be navigated. While going for the star Bunnies in the Wind, one plays on a cube which has a tunnel running through the center. Gameplay segments as one goes from the outside of the cube to the inside, so the quotient part is visible, but the seam is navigated through and clearly connects the two regions directly. By the same token, one might be interested in the Dusty Dune galaxy, which contains a three-hole torus. The holes are very flat, and the outside rim can't be walked on, so that they are effectively just pathways between two three-hole disks glued together.

If the visible seam isn't so necessary, the Cyclone Stone level has at least two independent cycles.

Another rather classical version of this is the snake game on a lot of Nokia phones. Indeed, in certain versions, it is possible to "open" the edges of the screen to a toroidal playground.

Not the answer you're looking for? Browse other questions tagged general-topology geometry recreational-mathematics education or ask your own question.

81
Why is a circle in a plane surrounded by 6 other circles?
15
topologies of spaces in escher games
6
Aren't asteroids contradicting Euler's rotation theorem?