I have the following two questions in my book: 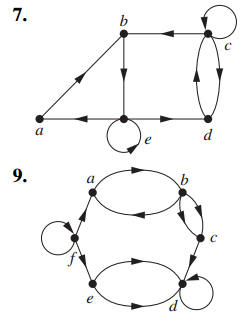 Describe a graph model that represents whether each person at a party knows the name of each other person at the part. Should the edges be directed or undirected? Should multiple edges be allowed? Should loops be allowed?

Read a bit more carefully the definition that your book gives: "A directed graph may have multiple directed edges from a vertex to a second (possibly the same) vertex are called as directed multigraphs."

Not the answer you're looking for? Browse other questions tagged discrete-mathematics graph-theory multigraphs or ask your own question.

7
Graph-Minor Theorem for Directed Graphs?
1
What does multiple edges mean in simple graph definition?
3
What is the formula for the density of a multigraph (both undirected and directed)?
1
Disjoint cycles in a regular multigraph of even degree
2
Number of directed multigraphs with $n$ arrows?