Smallest constant of Lipschitz retraction from bounded to continuous functions

Question: Does there exist a $2$-Lipschitz retraction from $B$ onto $C$?

I expect the answer to be negative, but so far was unable to find a suitable obstruction. 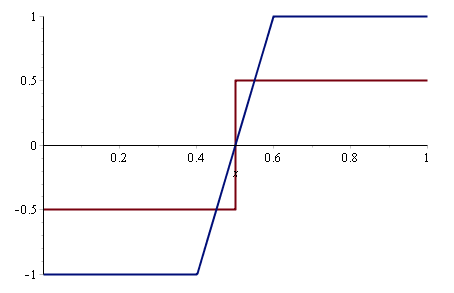 It seems that Nigel Kalton gave an answer to your question. He proved in [1], theorem 3.5, that for every compact metric space $K$, $C(K)$ is a $2$-absolute Lipschitz retract.

Consider the set of pairs $(h_1,h_2)\in B\times B$ such that $h_1$ is usc, $h_2$ is lsc, and $h_1\le h_2$. The main step of the proof is a $1$-Lipschitz retraction of this set onto its diagonal $\{(h,h) : h\in C\}$. This can be done via an iterative process, since the Lipschitz constant $1$ is preserved under composition. For the purpose of this construction, Kalton replaces a general compact set $K$ with the Cantor set, due to universality of the latter.