I figured this out:

I also validated it by Monte Carlo simulation. For $n=30$, $m=20$ and $p=0.5$, I get the following distribution, where the circles are the analytical probabilities and the line connects the MC estimates. 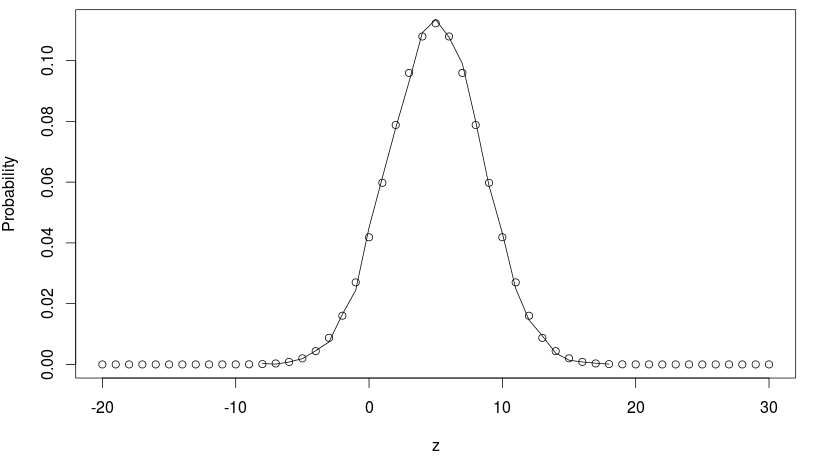 Because that looked to me pretty much like a binomial distribution, I gave it a try and figured out that its actually a binomial, just shifted by m to the left. This can be simply written as $P(Y=y) = Bin(y+m, m+n, p)$. Hence, given equal success probabilities, the sum of two independent binomially distributed random variables is binomial, but also their difference, just shifted to the left.

This question here difference between independent binomial variables is actually the same as mine, but received no answer and only the comment that there would be no simple formula. But the above formula looks pretty simple to me.

In general consider the means and variances of the distributions:

So the only case where $n\gt0$ and $m\gt0$ where the means and variances match a binomial distribution is when $p=\frac12$.

If $n$ and $m$ are sufficiently large, you can use the normal approximation:

Not the answer you're looking for? Browse other questions tagged probability statistics random-variables or ask your own question.