Later on, we learn the power series definitions of sin and cos.

How can one prove that these two definitions are equivalent?

Most of the proofs in elementary calculus textbooks use the definition of $\sin x$ via geometry to prove that the derivative of $\sin x$ is $\cos x$ (namely, the fact that $\lim_{x \to 0} \frac{ \sin x}{x} = 1$). Consequently, it follows that $\sin x$ and $\cos x$ are the two linearly independent solutions of $y'' = -y$. The power series equations are also two linearly independent solutions of this differential equation. Moreover, $\sin x$ and its derivative coincide with the derivative of the power series for $ \sin x$ at zero (no surprise, it's a Taylor series). Same for $\cos x$. By uniqueness of solutions to ordinary differential equations, this proves that $\sin x$ and $\cos x$ as defined in school are equal to their power series. (This is an expansion of Qiaochu's comment.)

If you allow yourself a tiny bit of calculus ( "$\sin x / x \to 1$" as "$x \to 0$" ) and apply some combinatorics, there's a really nice geometric interpretation of the terms of the power series for the functions. Consider this diagram and the polygonal "spiral" that starts at $P_0$ and closes in on the point $P$ (where $|P_0 P| = 1$).

Now, the lengths $|P_{k} P_{k+1}|$ are equal to the lengths of the curves $|I_k|$, which constitute a series of successive involutes (with $I_0$ defined to be a segment, and $I_1$ defined to be an arc of the unit circle). Combinatorics and the calculus result I mentioned show that the involute lengths satisfy ...

Interestingly, the same thing can be done with secant and tangent, using an involute zig-zag:

and the lengths $|I_k|$ turn out to be the appropriate multiples of powers of $\theta^k$.

BTW: I have not (yet) cracked the case for cosecant and cotangent.

In this paper it is shown that the addition law for cosine (and a couple other simple assumptions) uniquely determines cosine and sine. So then it's enough to prove geometrically that the high school functions satisfy that law (this is essentially Ptolemy's theorem), and prove that the power series functions satisfy it (using the binomial theorem and such manipulations).

As a rough outline, the circular definitions of sine and cosine (the y- and x-coordinates of the image of (1,0) under a rotation about the origin) lead to being able to differentiate sine and cosine, and once you know how to differentiate them (infinitely), Taylor's Theorem justifies that the power series is equal to the function.

Call the highschool functions (defined by the right triangle inscribed in a unit circle, the angle being equal to the length of the arc of the circle) $\sin_h$ and $\cos_h$, and let $\sin_p$ and $\cos_p$ be the power series definitions. (Note that these functions are continuous and agree at the end points $0$ and $2\pi$).

To do this rigorously you have essentially no choice as to the logic of the proof.

The first definition constructs (sin,cos) as a pair of functions on the unit circle X^2 + Y^2 = 1. The functions are just Y and X respectively.

The second definition constructs another pair (Sin,Cos), of functions on the real line. The functions are specific power series.

To show that these pairs are "equal" has a unique meaning: to construct some local identification of the two spaces (a locally invertible parametrization of the circle by the line, and vice versa, i.e., a covering map) such that under this identification (sin,cos) corresponds to (Sin,Cos).

This identification is itself unique: the rotationally invariant angle measure in the plane (Haar measure on SO(2,R) in its conventional normalization to have total length 2*Pi). If angle measure is already available by other means, such as length measurement on the circle, one gets a second construction of (sin,cos) through their inverse functions (using integrals) and one then has to check that arcsin^{-1} = Sin where the function on the left is an integral and the right is a power series.

Otherwise we have only the map in one direction, (Cos(t),Sin(t)) from the line to the circle using power series, and one has to check that Cos^2(t) + Sin^2(t) = 1 and the local invertibility (everywhere nonzero velocity vector) of the map. This would define angle measure on the circle as "t", ie., the inverse of the power-series parametrization of the circle by the line.

(Edited to remove Tex, click on the edit-history to see it with the TeX.)

Akhil Mathew's answer is definitely the most beautiful and brief one, but here I have a different approach which I think will be the most effective to VISUALIZE the entire stuff.

Using the power series definitions of the trigonometric functions, we can arrive at the following result: $$\frac{d}{dx}arccos(x)=-\frac{1}{\sqrt{1-x^2}}$$ Where $\mid x\mid\leqslant1$.

Now we introduce a 2D cartesian co-ordinate system and plot $y=\sqrt{1-x^2}$ [it looks like the unit circle equation, but note that we're not taking $\pm\sqrt{1-x^2}$ and hence the figure we'll get will be rather a semicircle covering the 1st and the 2nd quadrant only;Otherwise we'd have a great problem with the multi-valued function.Further we take $\mid x\mid\leqslant1$ to avoid complex plotting]. Suppose a ray $\vec{OB}$ from origin cuts the circumference at $B(x,\sqrt {1-x^2})$. Now we drop a perpendicular $BD$ from $B$ to $X$ axis. Clearly, $D$ is at $(x,0)$. 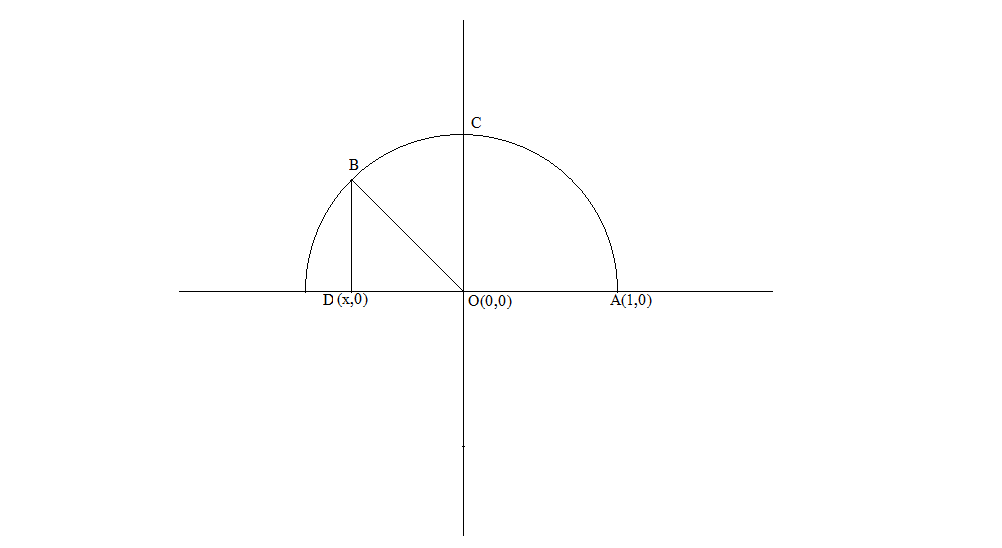 Isn't this what you wanted!

N.B. We have deduced the interrelation of the two definitions for the first two quadrants only. If we went for the 3rd and 4th, we won't be successful as the function $arccos$ doesn't have any image to represent angles of those quadrants. You can generalize the above for all quadrants and also for angles greater than $2\pi$ using results(obtained from power series definitions)like$cos(\pi+\theta)=-cos\theta;cos(-\theta)=cos\theta;cos(2\pi+\theta)=cos\theta$ etc.

This was origanally part of an answer HERE.

I remember my math teacher in high school (1968) putting (something like) this on the board and saying that it was a very old proof. I've tried finding it but I haven't had any luck. It is by no means a rigorous proof. But I think it is very interesting nonetheless.

Let's assume that n is an odd number. Then

Not the answer you're looking for? Browse other questions tagged geometry calculus trigonometry or ask your own question.

61
Are there theoretical applications of trigonometry?
52
Intuitive understanding of the derivatives of $\sin x$ and $\cos x$
54
Interesting math-facts that are visually attractive
19
what is sine of a real number
33
Axiomatic definition of sin and cos?
26
When the trig functions moved from the right triangle to the unit circle?
23
Intuition of Addition Formula for Sine and Cosine
18
Is there a geometric method to show $\sin x \sim x- \frac{x^3}{6}$
5
How can the circular function $\tan(\theta)$ be both a length and a ratio of lengths?
5
How to obtain the series of the common elementary functions without using derivatives?
See more linked questions