How can I see that the connected sum $\mathbb{P}^2 \# \mathbb{P}^2$ of the projective plane is homeomorphic to the Klein bottle?

I'm not necessarily looking for an explicit homeomorphism, just an intuitive argument of why this is the case. Can we see it using fundamental polygons?

For some really nice pictures that should make this quite clear to you, look at some of Carlo Sequin's recent papers like this one:

Let me try a different tack:

We'll look at IMMERSED versions of each of these (embedded Klein bottles in 3-space being kinda scarce).

The gist of the argument is the following (and you may not need the pictures once you get it):

I'll show you part 3 in pictures. We start with a schematic picture (i.e., I'm a lousy artist) of the standard picture of a K-bottle. The red ovals are meant to indicate cross-sections. We also have a piece of very elastic rubber, shown as a rectangle in the lower right. It's blue on one side, and red on the other: 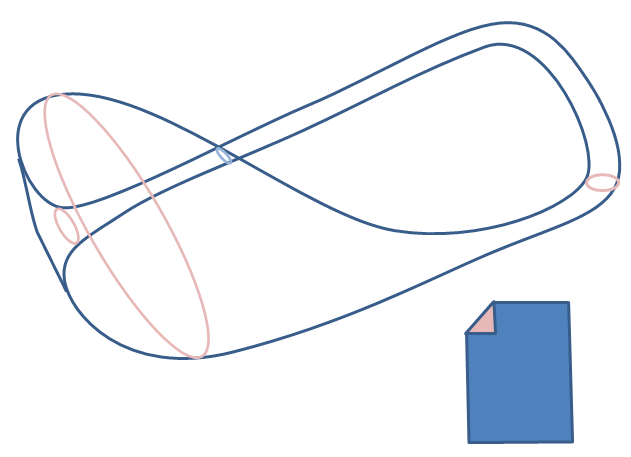 Next, we bandsaw this bottle in half, along the plane of symmetry (i.e., the plane perpendicular to our view direction). I've drawn, in dark blue, the resulting boundary. You can check for yourself that the boundary is an immersed circle in the plane. 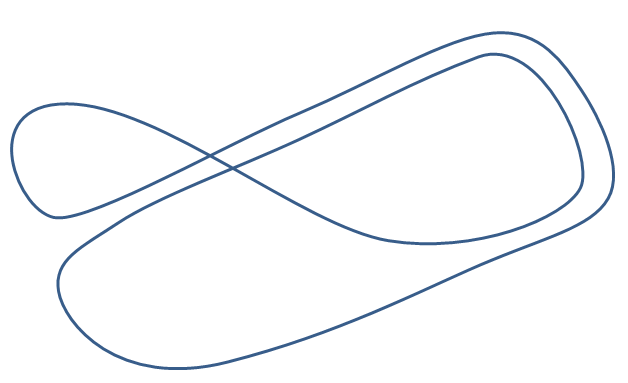 Now I'm going to build up the rest of the "far" half of the K-bottle, in steps. I start by gluing a rectangle of rubber as shown, and press the red mid-line "back" away from us, so that the thing depicted as a blue rectangle is really more like half of a paper-towel-tube. Clear? 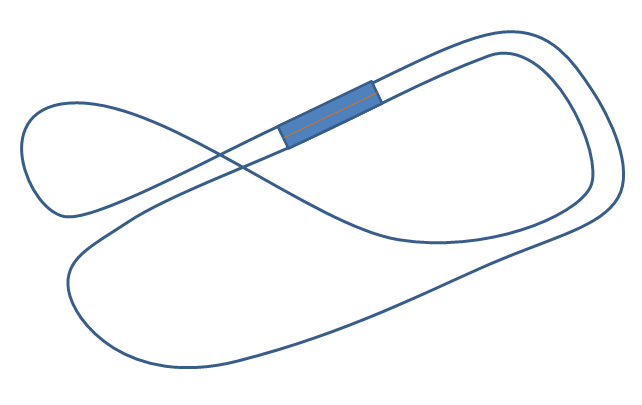 Now I extend this to glue up with more of the boundary: 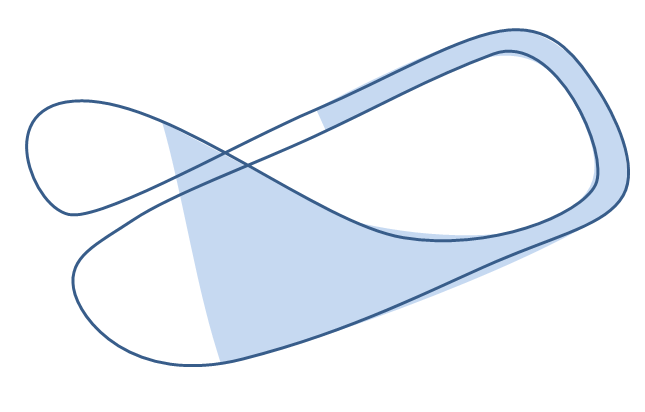 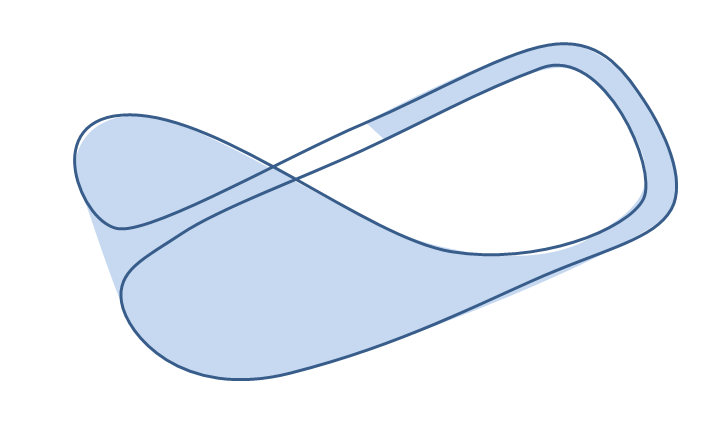 But when I reach the left end, to continue I have to fold the rubber sheet forward, so that you see the back side (in red): 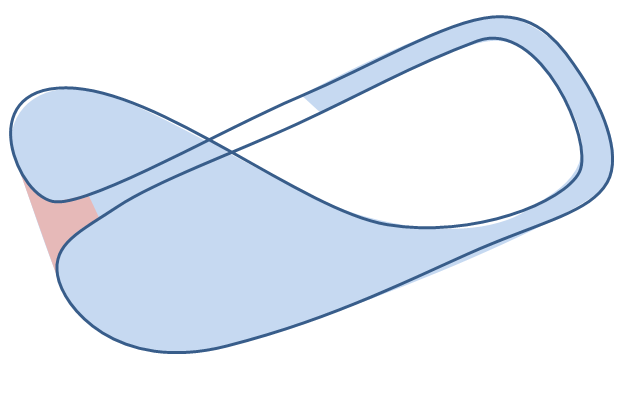 I continue extending, and you can see that to finish the job, I need to glue the sheet to itself in a way that matches the blue side with the red...and that makes a Mobius band. 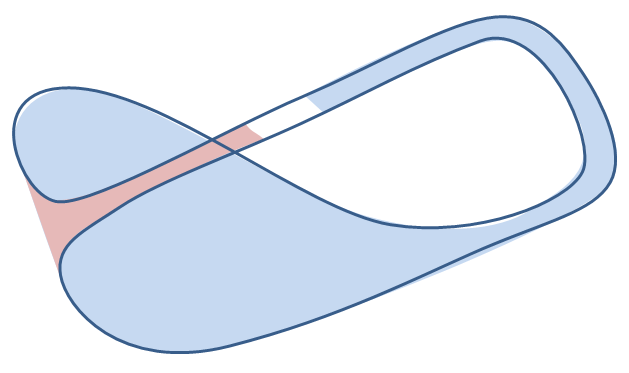 Here's an answer more in the spirit of the question. All figures should be read from upper left to upper right to lower left to lower right.

Fig 1: A Klein bottle...gets a yellow circle drawn on it; this splits it into two regions, which we reassemble, at which point they're obviously both Mobius bands: 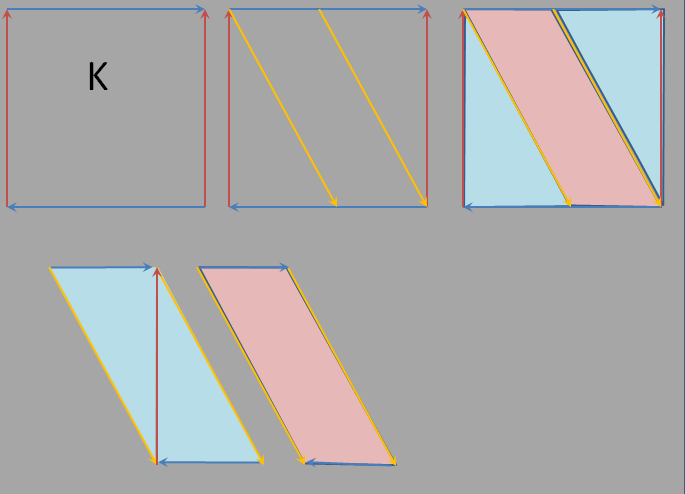 To see that $P^2$ minus a disk is a Mobius band, look at the following. In the upper left is $P^2$, drawn as a fundamental polygon with sides identified. In the upper right, I've removed a disk. The boundary of the now-missing disk is drawn at the lower left as a dashed line, and the two remaining parts of the edge of the fundamental polygon are color-coded to make the matching easier to see. In the lower right, I've morphed things a bit, and if you consider the green-followed-by-red as a single edge, you can see that when you glue the left side to the right, you get a M-band. 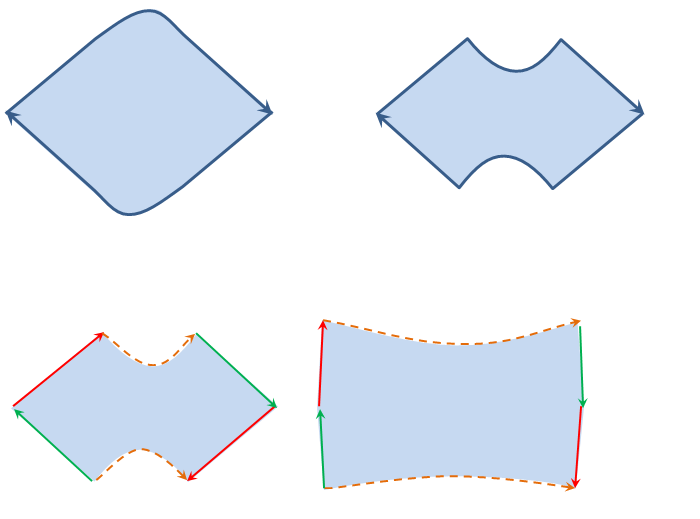