My math class went over the original Monty Hall problem a few days ago, then looked at a related question where the number of doors was increased to five. There was a struggle to figure out what the answer to the problem is, and after coming back to it a few more times we're still a bit unclear.

In this extended problem, let's say you pick door A out of doors A, B, C, D and E. The host then opens one of the other doors to show it's empty and gives you the choice to stay or switch to one of the other remaining doors. a) If you always stay with the door you picked, what is the probability of winning? b) If you always switch to another door, what is the probability of winning?

Note that the host will open only one door. All the extended Monty Hall problems I found online had the host open all but one, so they weren't really helpful with this particular problem my class is working on.

I calculated that the chances are 1/4 regardless of whether you switch or not since the host opening only one empty door is not enough to truly affect the difference in win rates between staying and switching. Is that right?

EDIT: Sorry about the confusion for me not being clear enough. The problem I bring is indeed ising the same basic principles as the original: the host will always open a door after you choose one to show it is empty, and then you are given the choice. The reason why I got to 1/4 is because I was looking at the situation by figuring out how many ways can you win/lose depending on where the prize is after the host opens an empty door as well as which door you switched to, which gave me 3/12 for every switch or 1/4 (or by putting it all together i got 12/48). We didn't get far enough into the lessons to learn more about calculating probability with conditions so I apologize if that was what led to me a false calculation. Thanks for the answers, everyone!

Think about it this way:

But you still only get to pick ONE door, and you have $3$ to choose from, so if you are going to choose to pick from the remaining $3$ doors, which together have $\frac{4}{5}$ chance of winning, you'll have a $\frac{1}{3}$ chance of being right from the selection of these three (since it is equally likely that you'll choose any of these three).

Here is a picture: 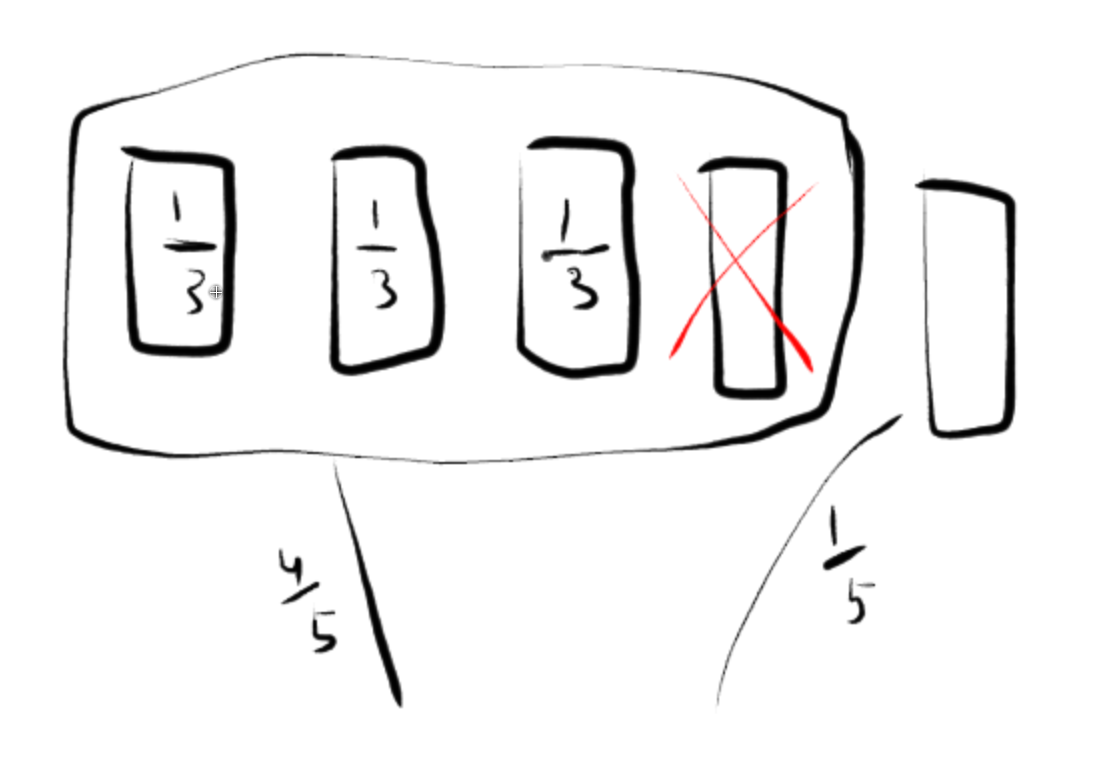 The computation is straightforward, though it is easy to get tangled up.

I assume there is only one prize behind the doors. The probability that your originally picked door ($A$, say) is the winner is $\frac15$ and this does not change because the host really does not give you any informationm about that door. He does give you information about the other doors, though. If he open $B$, clearly the probability of $B$ being the winner door is $0$. And (unless there is some known bias in the host's choices) the remaining doors $C,D,E$ have equal winning probabilities $p$. From $\frac15+0+p+p+p=1$, you can compute $p=\frac4{15}>\frac15$.

All the extended Monty Hall problems I found online had the host open all but one, so they weren't really helpful with this particular problem my class is working on.

The reason all the online Monty Hall problems have the host opening all but one is to convince you that, indeed, you get new information about where the prize is based on the host's door. If you have a hundred doors to choose from, you pick one, and then the host opens 98 of the others, do you now have a 50% chance? No, you have a 1% chance, and 99% the prize is behind the other door. Always change the door.

What if the host only opens 97 of the others? Do you now have a 1/3 chance? No, you still have a 1% chance. 99% of the time, the prize is still behind one of the other two doors, so now each of the other doors has something like a 49% chance of having the prize. You switch.

$1/4$ can't be right, because if you arrive at the game with a fixed determination never to switch, you will win exactly when the door you picked first has the prize, which (assuming the prize is randomly placed in the first place) happens with probability $1/5$.

It would be absurd if it increased your chances of winning simply that the game host opens another door first and gives you an option that you don't take. If that actually changed your chances of success, then how if the host opened another door and didn't give you an option to switch? Since you wouldn't switch either way, whether you're given the chance or not should not change the success probability.

The chance of pointing to the correct door was $1/5$ before the opening of a different door, and must still be $1/5$ afterwards. The chance of the prize being behind one of the other doors is the complement of this, that is, $4/5$, and by symmetry it must be a third of this per door, so $4/15$.

I think that the problem is ill-defined as it stands. The answer to the second question (i.e., the probability of winning upon switching) depends on (1) what door-opening policy the host uses; and (2) what switching policy the player uses.

If one implicitly assumes that the player selects randomly with equal probability of $1/3$ from the three other unopened doors upon considering switching, then the probability of winning is $4/15$, indeed, as other answerers pointed out. This can be seen to be true irrespective of how the host selects which door to open.

However, consider the following scenario. Without loss of generality, suppose that the player chooses door $A$. The host uses the following door-opening policy:

Given the host's door-opening policy, there are five relevant states of the world, each occurring with probability $1/5$:

Upon using the switching policy specified above, the player wins the prize upon switching in the second and the third of the five states. Hence, the probability of winning upon switching is $2/5>4/15$.

Therefore, the answer depends on how the host chooses which door to open and how the player selects which unopened door to switch to! This is because the player can infer some extra information from the particular door-opening policy the host uses. In the example above, if the player knows the policy the host uses, then she can be sure that the prize is behind door $B$ upon observing door $C$ having been opened! This extra information improves the player's chance of winning the prize upon switching.

With five doors, however, the specific details of how non-winning doors are opened by the host and how unopened doors are selected by the player do matter!

In fact, if the host really likes the player, he can make sure she wins with probability $4/5$ upon switching! To see this, suppose the host uses the following policy (again, wlog, assume that the player has chosen $A$):

You can easily check that the player will win with probability $4/5$ if she uses the following policy:

This is because if the player knows the host's policy, then the host is basically “telling” the player where the prize is, as long as it is not in $A$.

The standard assumptions are:

Let's say that you chose door A and Monte opens door B. We wish to compute $$ \Pr[\text{prize behind door A}\mid\text{Monty opens door B}]. $$ Using the assumptions, we solve using a probability tree. Stage 1 of the tree will represent the actual position of the prize, with three options: door A, door B, or one of doors C, D, E.

Because there was a complaint about lack of a mathematical treatment, and because this problem comes down to the same mathematical principles that most extended Monty Hall problems do, here's a generalized treatment.

The general setup is, there are $n$ doors, and there is a valuable prize behind exactly one door (the "prize door"), whose identity is not known to you. Initially, you choose one door. With some non-zero probability $p$ (which is independent of whether you chose the door with the prize initially), the host will then open $m$ doors, $m \leq n - 2,$ where neither your initially chosen door nor the prize door (if it is different) can be one of the $m$ doors.

Now let's say you are playing the game and the host has just opened the $m$ doors, that is, you have just observed event $B.$ We ask, what is now the probability of $A$ (that is, the probability that the car is behind the door you initially chose), given that we have observed $B$? That is, what is $P(A|B)$? By applying Bayes' Theorem, we find that $$P(A|B) = \frac{P(B|A)P(A)}{P(B)} = P(A),$$ since $\frac{P(B|A)}{P(B)} = 1.$ That is, the probability that you have already chosen the prize door is exactly the same after the host's action as before the host's action.

In other words, every one else who told you something equivalent to that last sentence was telling you the truth. 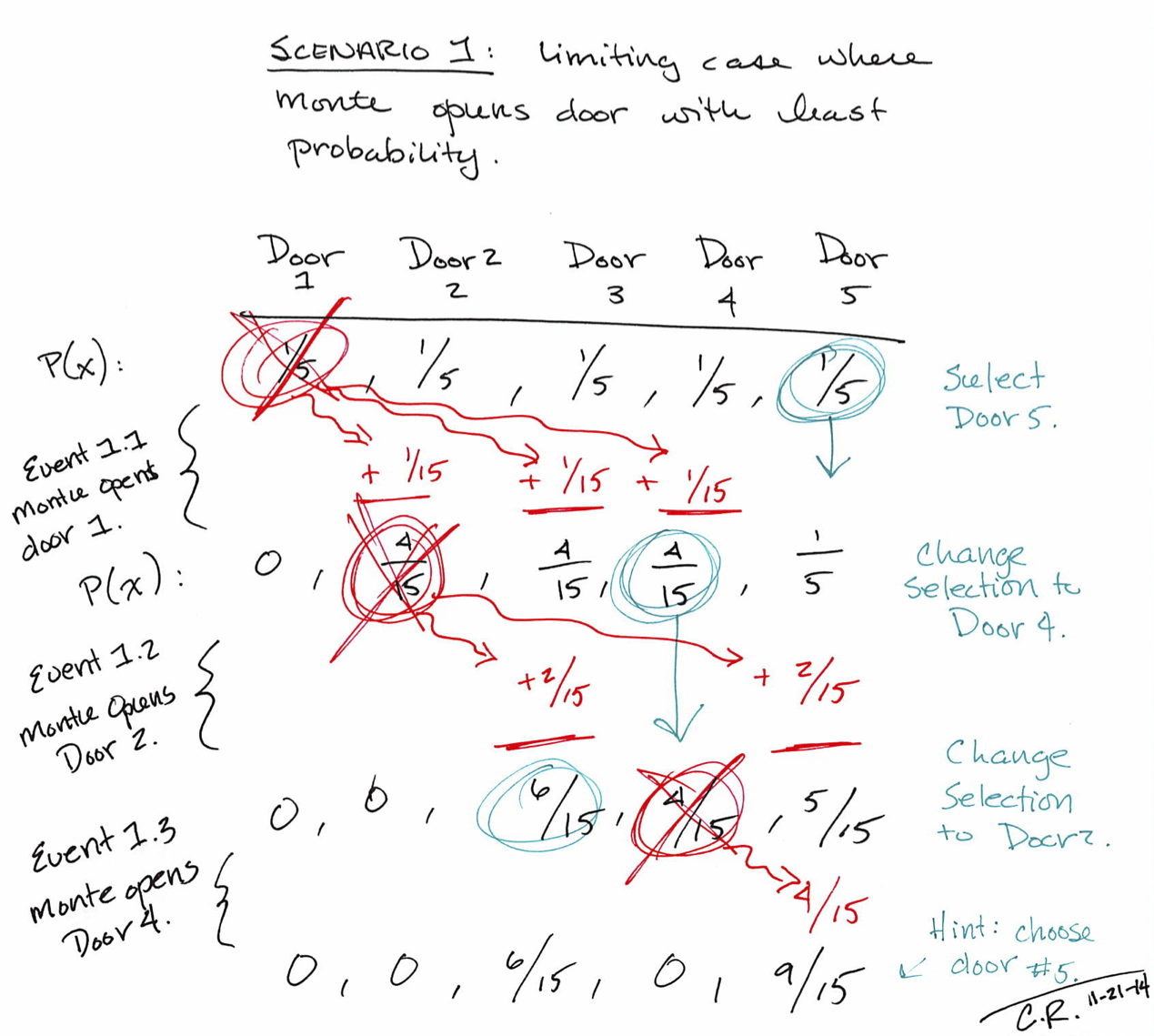 Not the answer you're looking for? Browse other questions tagged probability discrete-mathematics monty-hall or ask your own question.