Strong Mathematical Induction: Why More than One Base Case?

In strong induction, as you can see below, you prove more than 1 base case. I am not sure why. Then you prove $n+1$ is true...

I don't know why or how they choose however many base cases to prove or why proving extra base cases matters. Could someone please explain the inductive step of $3 + n - 2$? Where did it come from? 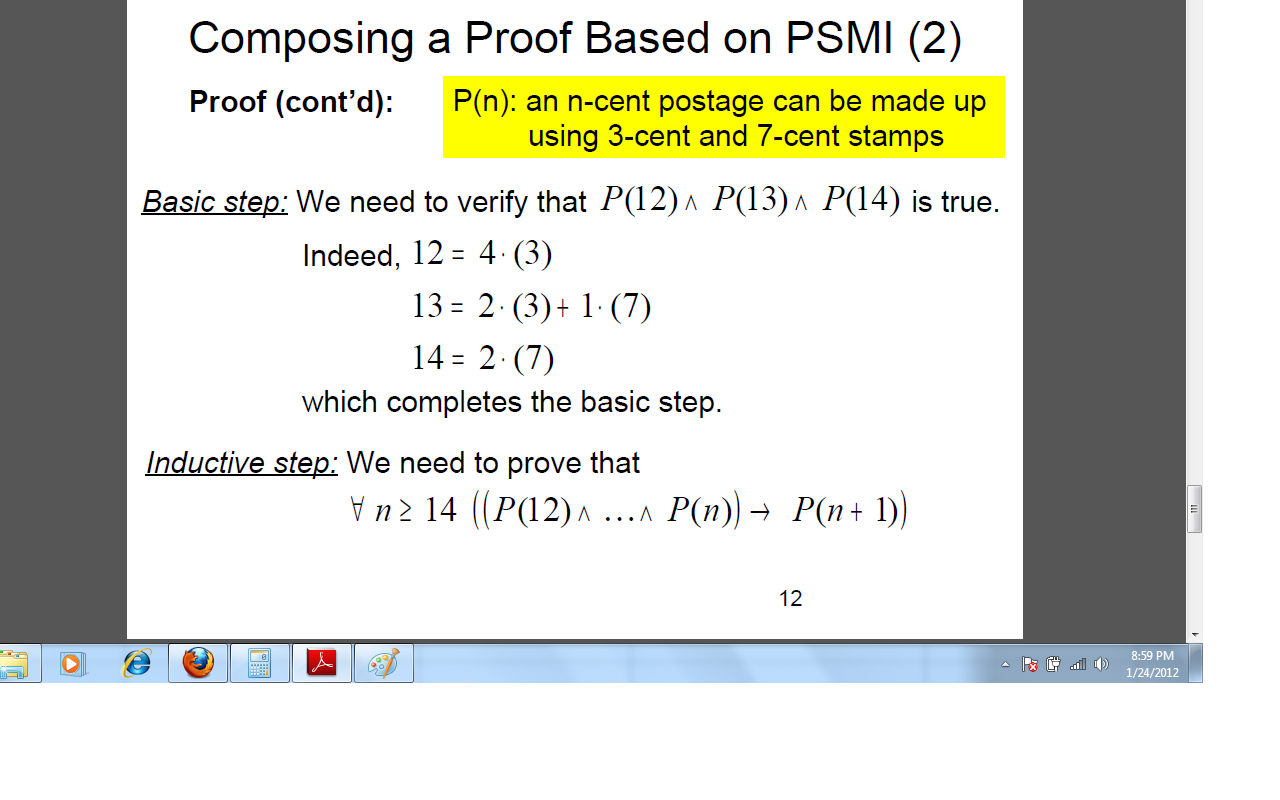 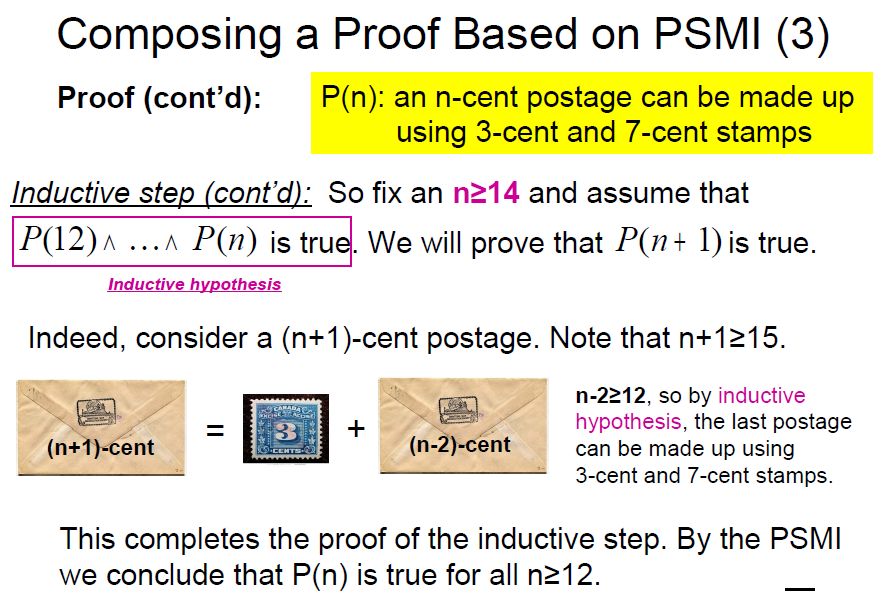 As written, this is inaccurate, though that may be simply a result of poor phrasing.

In standard induction, we do two things:

In strong induction, we only need to prove one thing:

(I used what is called the "Well Ordering Principle for Positive Integers": every nonempty collection of positive integers has a smallest element; this is in fact equivalent to induction).

Caveat: In strong induction, it is often the case that the general argument proving the implication does not hold for all $n$, but only for all "sufficiently large" $n$. In that case, we need to establish the implication for some $n$ "by hand". This is often, incorrectly, called a "base" of the induction. In fact, it is a "special case" of the proof of the single inductive step.

Here, the proposition being proven is:

The strong inductive step is:

If $n\lt 12$, then this is true simply because the proposition is true for $n$, so the consequent is true.

And if $n\geq 15$, the argument we had before already worked.

Personally, I prefer to do proofs by strong induction by first doing the "general case", and then doing the "special cases", as the latter are only revealed after we examine the general proof and see if it works for all $n$ or not. This also helps draw the distinction between proofs by strong induction and proofs by regular induction, specifically that the latter need a base and an inductive step, while the former only needs an inductive step (but may require special cases).

Arturo's answer is very correct, but since you said you haven't understand much, I will just try to rephrase some points.

First, it's important to notice that as it is, the proof (or the statement is wrong). The correct statement is, as stated by Arturo:

An n-cent postage where n is greater or equal than 12 can be made up using 3-cents and 7 -cents stamps.

Now, you could try to use simple induction, and to say let's assume P(n) is true, and let's show that P(n+1) is also true. The problem is that you won't be able to show that, because knowing how to make a n-cent postage with 3-cents and 7-cents stamps does not help you to make a n+1-cent postage! For instance, a 20-cents postage can be made as 7+3+7+3. But a 21-cents postage is made using 7+7+7.

Now, your proof holds, because intuitively:

1
Method of Proof (Computer Science)
1
Why are there multiple base cases in this strong induction?
22
What is the second principle of finite induction?
9
Strong Induction: Example Using All of P(1) and … and P(k - 1) and P(k) to Prove P(k + 1)
3
I want a clear explanation for the Principle of Strong Mathematical Induction
2
Mathematical Induction: Stamps
2
How to calculate price for stamps?
2
Does "normal" induction work in any well-ordered set?
0
strong math induction always requires more base cases than common math induction for the same proposition?
0
Strong inducti0n with 3- and 5-peso notes and can pay any number greater than 7.
See more linked questions