Why is an ellipse, hyperbola, and circle not a function?

But I don't understand why? To me a function is just input and output value:

You enter an input value and you get an output value. Above is a parabola, since it is a basic quadratic function.

But you can do the same with hyperbolas:

And you can do the same with ellipses, which are essentially the inverse of a hyperbola:

To me, those two are functions, as is the original quadratic. True, the latter two fail the vertical line test, but so what? You give it an input value and you get an output value. Why are these not functions?

The function $f(x)=x^2$ is not a parabola. It is merely a function.

If you write $y=x^2,$ then the set of points in the $x,y$-plane that satisfy that equation is a parabola.

When you write $f(x,y)=\frac{x^2}9 - \frac{y^2}4,$ then certainly $f(x,y)$ is a function, but it's a function of two variables, and you are not plotting its output using the vertical axis. In fact, that equation does not even define any kind of curve in the $x,y$-plane, because you've put no restrictions on what $x$ or $y$ could be. Any values of $x$ and $y$ are valid input for this $f(x,y)$ and will make the equation true, since you have defined the function that way.

Edit: I substituted new wording in a couple of places that I hope is a little more accurate than my previous use of the words "valid" and "relevant." Moreover, I've attempted to make it clearer that the comments above apply only to figures in a plane. You can define a figure in three-dimensional Cartesian space by the points that satisfy $z=f(x,y)$ for some function $f$ of two variables, and this figure will pass a "vertical line test" where the "vertical" lines are parallel to the $z$-axis. Thanks go to the commenters who pointed out these weaknesses in the original answer text.

I really love this question because you're obviously a smart student, but you have a misconception I see in my multivariable calculus students all the time. You have the right idea of function—“just input and output values” (not variables!) OK, the definition is more precise, but the rest of your question shows you know what a function is.

What I see you doing is identifying functions with curves, especially curves which are graphs of functions. Your very question–“Why is an ellipse not a function?” shows it. When read precisely, the obvious way to answer this question is, “Because an ellipse is a kind of curve, and a function is [to use your words] just input and output values.”

Up until functions of more than one variable get introduced, we pretty much do treat a function (of one variable) as identical to its graph. Our intuitive ideas about limits, continuity, derivatives, everything, are all based on geometric notions about the graph of a function. And being able to graph functions quickly requires a kind of mental index of which kinds of functions have which kinds of curves as their graphs. 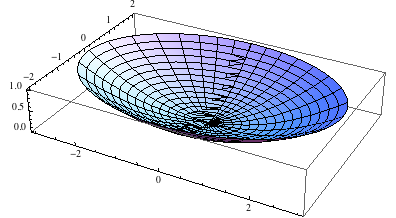 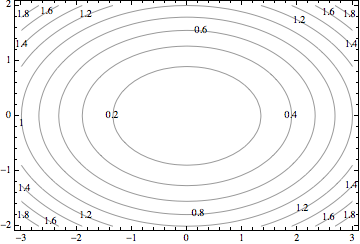 The vertical line test doesn't have any meaning here, because we are not looking at the graph of a function, we are looking at its domain. The geometric property that characterizes “function” in a contour plot is that the level curves for two different values do not intersect. For if the level curves for $1$ and $2$ intersected at $(a,b)$, then $f(a,b)=1$ and $f(a,b)=2$, which doesn't make sense.

Like DavidK said in his comment: “If things start to get complicated, however, sometimes we can clear up confusion by being very explicit about exactly what we mean.” A function is not the same as its graph, nor is it the same as its level curves.

It's the definition of a function that is important. It's the fact that a function is one to one. Meaning that when you plug in an $x$ value you only get one $y$ value out.

I did a Google search for images and luckily found a link with the latex done for it, but I put them below. Hopefully the visual will help!

While it is true that

TL;DR: Notions of a function only returning "one-dimensional" values or of functions only being meaningful when you graph them are grade-school poppycock.

What they're trying to tell you is that functions have exactly one point they associate to a given input. The key insight is that that one point can come from any kind of set (and not just a "one-dimensional" one). For example, the ordered pair $(a,b)$ is two real numbers (i.e. from $\Bbb R$), but only a single 2D number (i.e. from $\Bbb R^2$). You can't have a function return two real numbers, but you can have a function return a single 2D number. See the nuance?

You could have as another example $f:\Bbb R^{16} \rightarrow \Bbb C^3$ a perfectly fine function mapping some $16$-dimensional space to some $6$-dimensional space. In this case, the single point is a 6D value (or a 3D complex value; I've been putting "dimension" in quotes this whole time because it's either semi-useless to talk about or hard to pin down the meaning of in higher math).

Conclusion: if you have a real-valued function (i.e. onto $\Bbb R$), then the vertical line test gives you a way to check the plot of the function to check that each input has only one real value associated with it. BUT, if the function were complex valued or $\Bbb R^2$ valued, or anything else, then the associated points are multidimensional and the vertical line test is a useless piece of garbage that gets in the way.

You can consider the function $f\left({x,y}\right)$ to be a function of two variables. Then every pair of numbers (the argument) you feed in produces exactly one output (the image). This would not be an ellipse, though, because it would be a three dimensional creature. You would call it an ellipsoid, hyperboloid, or sphere.

edit: I was wrong, they're all paraboloids.

A function maps all elements of its domain to one element of its range. The vertical line test is a graphical way to show that for a graph of a function mapping one variable to another in the Cartesian plane. There is no reason why a function can't have any of the following forms: Map a real number, x to a complex number x+ix² or map a pair of points satisfying the equation x+y = 3 to x*√|y|. It is arbitrary whether you choose to think of the result as existing "in the same graphical space" as the other two.

In my first example it might be obvious that the result can't be "in" the same (one dimensional) space as the values of x. You can define a function of 3 independent variables onto a 1537 dimensional space (to give a random example). Mostly our brains get confused above two or three independent variables, so most of your math will be restricted to low dimensions, and usually (but not always) the domain and range are both subsets of the same space (like 2D, 3D or 4D). A line will only intersect a function that extends from -∞ to +∞ IF you restrict the function to "live" in 2D. The same function in 3D could easily avoid intersecting any given line at all. The vertical line test fails in three ways I can think of: first I can Graph y=x² with the x-axis vertical. Drawing a vertical line doesn't test whether y is a function of x in that case. I can define a function that = 0 when $x < 1$ and =7 when $x ≥ 1$. There will be points arbitrarily close to x=1 but infinitesimally less where the function = 0 so any "physical" line drawn at x=1 will also overlap those points (since any 'physical' line has a finite width). And third a line only works, as discussed above, in Euclidean 2D spaces, most functions aren't found there. The test is a good way for beginners to gain an intuitive 'feel' for functions, and gives some practice at identifying those relationships that are and those that are not functions.

Oh, btw any continuous curve can be divided (cut up) into functions. Using a vertical line allows you to identify where to make the cuts...

It just means that it's not a representation in which $y$ is a function of $x$.

However, it could be a representation in which both $y$ and $x$ are a function of some other parameter, call it $\theta$. A circle can be written as

In fact, if you've come across the idea of imaginary and complex numbers, they would let you write some 2-D curves even more compactly: a circle would be $f(\theta) = e^{i\theta}$. The function output is now a single number again, but it's a complex number—i.e. one that consists of a real part and an imaginary part. The convention for the plot would be to plot the real part on the $x$ axis and the imaginary part on the $y$ axis.

Not the answer you're looking for? Browse other questions tagged functions conic-sections or ask your own question.

1
Power functions and parabola issue
14
Why Is a Function Defined As Having Only One Y-Value Output?
4
Why is $y = \sqrt{x-4}$ a function? and $y = \sqrt{4 - x^2}$ should be a circle
0
Confusion with the vertical line test of functions
0
Conics: why is the eccentricity and focal parameter well-defined, and how to show uniqueness of foci and directrices