What is the categorical diagram for the tensor product?

The title says it all: what is the diagram that defines a tensor product? (I'm using the term diagram here in the technical sense it has in category theory.)

There isn't one, in the sense that the tensor product, in many contexts (e.g. vector spaces), is neither a limit nor a colimit.

holds. If we have these structures then we are working in a closed monoidal category. For example, all of this works out for the category of modules over a commutative ring $R$.

The situation is mildly confused, though.

Let's assume we're talking about tensor product of $M$ and $N$ over the commutative ring $R$. I think what you are really after is how to express the tensor product as a universal arrow, since it isn't a limit or a colimit.

The notion of universal arrow, although correct here, is more often called a universal element in this case. 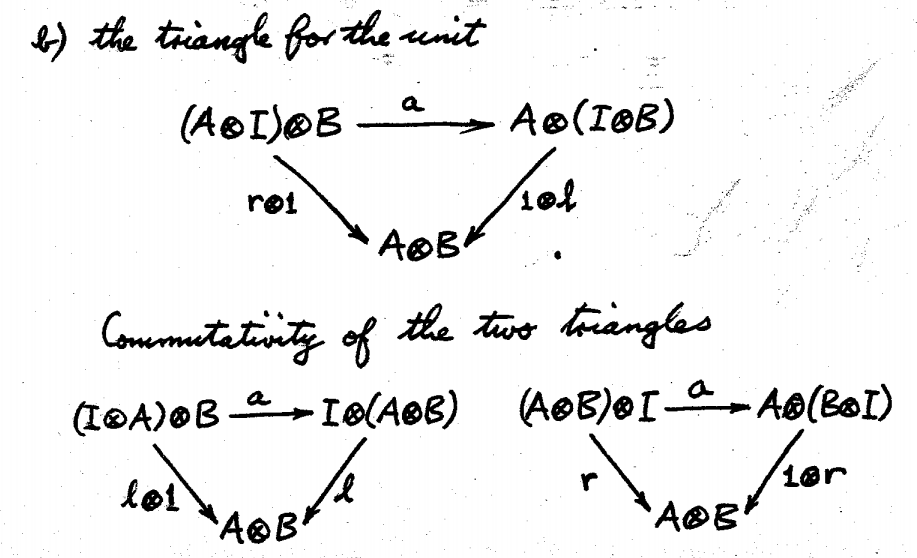 as well as other conditions.

Of course as Eugenia Cheng says in the video you've linked every limit, colimit, universal property can be seen as an initial object in a opportune category: if $F \colon \mathbf C \to \mathbf D$ is a functor a universal arrow for $F$ is just an initial object in the comma category $(\text{id}_{\mathbf D} \downarrow F)$.

The following construction is not really presenting tensor product "as an initial object somewhere", but rather showing that one can encode $R$-balanced maps into diagrams of group homomorphisms, hence one can indeed think of the tensor product as a colimit (of Abelian groups).

Consider the following diagram in $\mathbf{Ab}$:

Its arrows are given as follows:

On the other hand, it is also clear that whenever one has an $R$-balanced map $g:M\times N \rightarrow A$, one can construct a collection of group homomorphism compatible with the diagram by setting $g_n:M_n\rightarrow A$ to be $g(-,n)$.

Also note that the choice of $\mathbf{Ab}$ is not some compromise, but a necessity, since in general $M\otimes_R N$ is just an Abelian group, i.e. not necessarily a left or right $R$-module. If the ring $R$ is commutative (as in the case of fields), one can adjust the construction to obtain the tensor product as a colimit in $R-\mathrm{Mod}$.

Not the answer you're looking for? Browse other questions tagged category-theory tensor-products or ask your own question.

1
Tensorprodukt definition through universal arrow/Comma category
2
How to define the tensor product via an initial morphism?
27
Geometric intuition of tensor product
25
“Abstract nonsense” proof of the splitting lemma
4
Tensor product as a colimit

4
Tensor product as a colimit
1
Does the functor treating a monoid as a category preserve colimits and limits?
5
Category theory - what's the intuition behind diagrams?
2
Adjoint functor with initial objects
1
Initial category having all limits and colimits?
3
What is the (categorical) significance of being able to describe the same idea in different ways?
3
Most general concept of tensor product
1
Simple examples of initial/terminal morphisms that aren’t limits/colimts