The following pattern gives you a density of almost $\frac45$, so almost $\frac{10^6}{5}=200000$ copies. You can get the exact number by careful counting - but I am not completely sure how to easily see that not a single extra square is possible ... 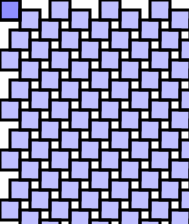 Not the answer you're looking for? Browse other questions tagged combinatorics contest-math extremal-combinatorics or ask your own question.