is a net stronger than a transfinite sequence for characterizing topology?

For general topological spaces, this result no longer holds. Spaces for which it does hold are called sequential spaces. Spaces are usually not sequential because they are not first countable. In such spaces, there are "not enough" numbers in the countable index set to extend into these very large spaces and reach every limit point. For example, if $\omega_1$ is the first uncountable ordinal, then $\omega_1+1$ is a topological space under the order topology, and $\omega_1$ is a limit point, but no sequence of ordinals reaches $\omega_1$. The topology of this space is not characterized by limits of sequences.

This defect is usually fixed by replacing the notion of a sequence with the more general notion of a net, which is like a sequence but indexed by an arbitrary directed set, instead of the natural numbers. Since the net's index set is arbitrary, it can be of any cardinality and therefore nets can reach those faraway limit points in non first countable spaces, and the result is restored: a function between topological spaces is continuous iff it preserves limits of nets. A set is closed iff it is closed under limit of nets.

But if the problem is that the cardinality of the space is too high for sequences to do the job, the most conservative generalization that suggests itself to me is to just increase the cardinality of the index set; the transfinite sequence, indexed by an arbitrary ordinal. So my question is: is this strong enough? Is it just a matter of convenience? Nets require less machinery, and are natural because e.g. the neighborhoods of a point constitute a net, whereas transfinites require a detour into unrelated areas of set theory. But nets are not totally ordered, and there may be times it would be nice to have a totally ordered index set for our sequence-like object.

The spaces characterized by the property that a subset is closed if and only if it is closed w.r.t. limits of transfinite sequences are called pseudoradial spaces.

I would like to give an example of a space that is not pseudoradial together with sketch of a proof. (I hope I am not doing something very easy in a too complicated way.) I would also like to mention a few references and some properties of these spaces.

Before presenting the example, one short remark. Pseudoradial spaces are represented by the convergence of net on well-ordered nets. Obviously, it is sufficient to take the nets on ordinals. We can go a little further - regular cardinals are sufficient. Indeed, if we have a cofinal subset of an ordinal, we can use this cofinal subset to get another convergent net.

Let us consider the following example. Each arrow in the picture bellow represents a convergent sequence. I.e., this is a topological space homeomorphic to $\{0\}\cup\{\frac1n;n\in\mathbb N\}$ taken as a subspace of real line. Equivalently, this is precisely the ordinal $\omega+1$ taken with the order topology.

We take all these sequences and identify some of the points as in the picture. (I.e., we make a quotient space of some of these spaces.) Let us call the resulting space $S_2$. Then we take the subspace of this space as shown in the picture. This subspace will be called $S_2^-$. (I've taken the notation $S_2$ and $S_2^-$ from this paper: Franklin S.P., Rajagopalan M., On subsequential spaces, Topology Appl. 35 (1990), 1-19. But you can notice that this space is very very similar to Arens-Fort space mentioned in Brian's answer.) 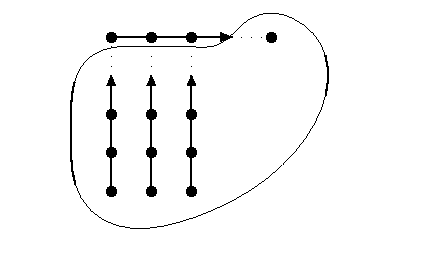 Note that the space $S_2^-$ has only one non-isolated point. Let us call it $\omega$ . So we ask whether there is a transfinite sequence, consisting only of points different from $\omega$, which converges to $\omega$.

First, let us show that this is not possible for a regular cardinal $\alpha>\omega$. Suppose that $(x_\eta)_{\eta<\alpha}$ is an $\alpha$-sequence of points of $S_2^-\setminus\{\infty\}$, which converges to $\infty$. Let us denote $n_\eta$ the "column" to which $x_\eta$ belongs. In we use the notation the notation from the picture bellow $n_\eta$ is the first coordinate of ordered pair $x_\eta$. 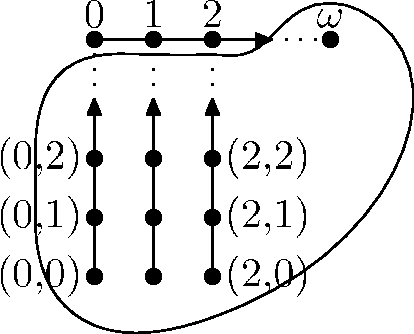 So the only possibility is to take a sequence in the usual sense, i.e., a sequence of length $\omega$. Perhaps with a little handwaving, but it is more-or-less clear that general situation is similar to the situation when the $n$-term of the sequence is in the $n$-th column. So we have a sequence $x_n=(n,y_n)$. Obviously $\{\omega\}\cup\bigcup\limits_{n\in\omega} \{n\}\times(y_n,\infty)$ is a neighborhood of the point $\omega$ containing no terms of this sequence.

Pseudoradial spaces were introduced by H. Herrlich. Quotienten geordneten Räume und Folgenkonvergenz. Fund. Math., 61:79–81, 1967; pdf. They were later studied by A.V. Arhangelskii and many others.

The same thing can be done with any class $\mathbb P$ of directed sets instead of ordinals. This is called $\mathbb P$-net spaces in P. J. Nyikos. Convergence in topology. (In M. Hušek and J. van Mill, editors, Recent Progress in General Topology, pages 537–570, Amsterdam 1992. North-Holland.) The properties of pseudoradial spaces which I mentioned in the preceding paragraph are true for $\mathbb P$-net spaces, too.

The answer to your last question is yes. $\beta\omega$, the Čech-Stone compactification of $\omega$, is such a space. No sequence in $\omega$, transfinite or otherwise, converges unless it’s eventually constant, but each point in $\beta\omega\setminus\omega$ is the limit of a net in $\omega$. Specifically, if $p\in\beta\omega\setminus\omega$, we can regard $p$ as a free ultrafilter on $\omega$. Let $I=\{\langle n,A\rangle:n\in A\in p\}$, and let $\nu:I\to\omega:\langle n,A\rangle\mapsto n$; then $\nu$ is a net that converges to $p$.

A more elementary example is the Arens-Fort space, which is a countable Hausdorff space that is not first countable at its one non-isolated point. Let $X$ be this space, let $p$ be the one non-isolated point, and let $D$ be the set of isolated points. Then no sequence in $D$ of any length converges to $p$, but the net in $D$ built in the usual way from the nbhds of $p$ does converge to $p$.

Edit: this argument appears to be wrong, but what's wrong with it?

I think Asaf's comment answers this. He says: under AC, any directed set $D$ has a cofinal well ordered set.

To see this, apply Zorn's lemma to well-ordered subsets of $D$, partially ordered by inclusion, deduce that a maximal element must be cofinal.

Not the answer you're looking for? Browse other questions tagged general-topology sequences-and-series nets or ask your own question.

5
non sequential spaces
8
convergence of nets vs. convergence of really long sequences
6
Example of a topological space which is neither sequential nor $T_0$
6
Intuition behind nets
2
Sequentially closed $\implies$ closed, but not Fréchet-Urysohn space
2
Limit of a sequence and a closed set
3
Is there a topology on the countable set which makes the space is not first countable but has countable pseudocharacter?
2
Sequentially open sets but not open
1
Sequential properties of topological spaces
1
How are an $ω$-sequence of points and its limit defined?
See more linked questions

31
Is there a way of working with the Zariski topology in terms of convergence/limits?
13
Nets - preoredered sets or posets?
3
What is the main defferences between nets and ordinary sequences
2
Can we define the concept of limit without a topology?
2
Is a sequentially compact (non-metrizable) uniform space totally bounded?
2
Nets Via Sequences in Topological spaces
0
Locally Compact Hausdorff Topologial Group but not Sequential?
2
A net vs a sequence
2
When can nets be replaced by sequences?